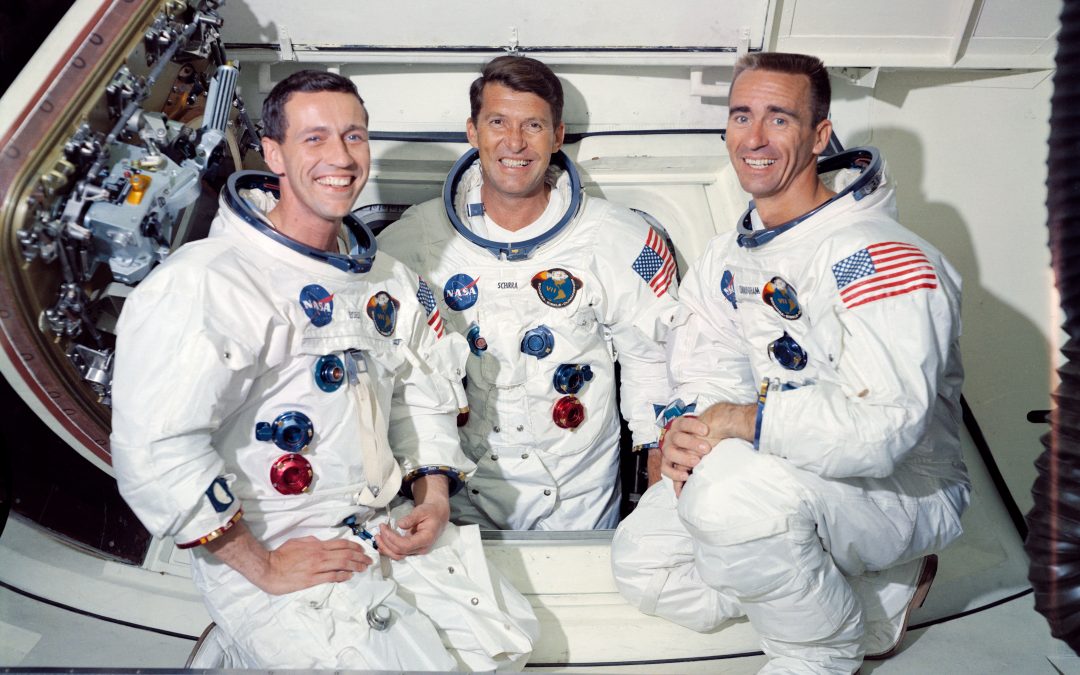 “Well, Apollo 7 became very important … If we had not had a success on Apollo 7, we really don’t know what would’ve happened to the space program. Another accident and the fainthearted in the country, as we have a tendency to be, would’ve been clamoring to stop it, you know. People don’t realize there are a lot of things worse than dying, and there are a lot of things worth dying for in this life. And certainly we believed that that was one of them … We never even had any hesitation about that.” Apollo 7’s Walt Cunningham, from a 1999 Johnson Space Center oral history interview

Matthew Goriachkovsky, a recent graduate of University of California, Irvine, has written and produced a new podcast, Apollo 7: The Forgotten Mission. Well-researched, very listenable, and often hilarious, it features interviews with Walt Cunningham (the mission’s lunar module pilot), oral history interviews from the mission’s late commander Wally Schirra, space historian Francis French, and two of the late Donn Eisele’s children, Kristy and Andrew Eisele. It also features readings from Eisele’s memoir Apollo Pilot, which was edited by French. Apollo 7 is one of the least discussed Apollo missions, eclipsed by the grandeur of its following mission – Apollo 8, which saw humans orbiting the Moon for the first time in human history – and loads of controversy, much of it undeserved.

The first episode, “Go Fever,” sets the scene for why Apollo 7 became such an important (yet criminally underrated) benchmark in American human spaceflight. It begins with an ailing Apollo program, beset by problems with what was to be its first crewed mission, Apollo 1. However, this mission – and its crew of Virgil I. “Gus” Grissom, Ed White, and Roger Chaffee – is met with tragedy. Apollo 7’s Eisele was supposed to be on this crew, bumped off only by shoulder surgery. His Apollo Pilot reminiscences of having to repeatedly listen to his dead colleagues’ final moments set against Goriachkovsky’s sonic background of a burning fire is chilling. One truly understands Eisele’s anger and frustration with higher-ups who dismissed the astronauts’ demands for a safer vehicle, one with a better designed hatch.

The second episode, entitled “Spam in a Can,” discusses the ensuing mission, and some of the controversy surrounding what would be characterized by some as “Wally Schirra’s B—tch Circus.” In short, commander Schirra developed a cold (likely from an ill-advised hunting trip in cold, wet weather before Apollo 7’s launch) during the mission, and displayed a lack of flexibility concerning mission milestones (for example, the infamous “Walt, Wally, and Donn” TV feed was going to be moved up, but Schirra refused). Schirra’s irascibility culminated in him refusing to wear his helmet upon reentry due to the severity of his cold (which was understandable), and following their commander’s lead, Cunningham and Eisele did likewise. However, the two junior crew members’ willingness to follow their commander would have resonances. While Schirra was intending to retire following Apollo 7, Cunningham and Eisele didn’t fly again – the former was assigned to Apollo Applications, and the latter to a dead-end Apollo 10 backup crew assignment.

The third episode, titled “Peters-in-Law,” (this author suggests you read Apollo Pilot to understand the meaning of this term) discusses perhaps another reason why Eisele didn’t get another flight. Around the same time Apollo 7 was lifting off, Eisele’s first marriage was disintegrating, and his performance as an astronaut was criticized around this period. Many Apollo astronauts had shaky marriages, but upon his return from space, Eisele’s imploded publicly, and a new relationship was deemed as the culprit; its dissolution made the newspapers. Eisele was one of the first astronauts to break a sort of unspoken code of conduct among its ranks: don’t let your personal lives make the papers. While soon other Apollo astronauts would, too, divorce, Eisele was – perhaps unfairly – publicly offered up as an example of a fallen American hero. This parable would be explored in his Apollo Pilot, and other astronaut memoirs including Cunningham’s The All-American Boys.

In conclusion, Goriachkovsky’s Apollo 7 paints a mission often shown in flat, matte black-and-white in vivid color, remembering its spirited crewmembers, objectives, and sometimes salacious stories. It is a brilliant testament to the power of three, and how a productive mission can restore life to a flagging, much-criticized space program. Within less than a year of Apollo 7’s launch, a human would leave footprints on the Moon for the first time – a feat unlikely to have happened without that first crewed mission’s resounding success.

Apollo 7: The Forgotten Mission can be listened to on Spotify, Stitcher, and Anchor, and will be available on National Space Day, May 1.