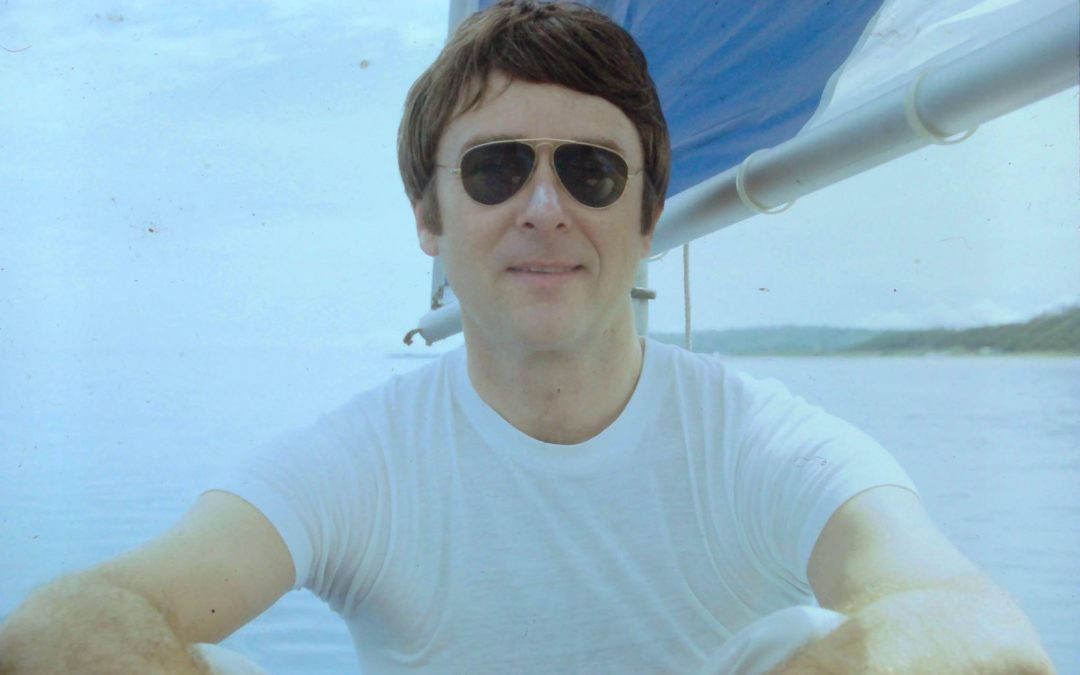 In last week’s This Space Available blog post, we ended with Dr. Brian O’Leary’s April 1968 resignation from the NASA astronaut corps, which left a bad taste in the mouths of many of his former colleagues. After accepting a teaching post at Cornell University (invited by Dr. Carl Sagan himself), he entered into the world of politics. His most visible foray into that world happened on May 9, 1970, when he – along with other Cornell colleagues – were part of CBS Evening News’ lead story, highlighting their attempts to take their protests concerning the wars in Vietnam and Cambodia to the nation’s highest elected official. According to an online biography, O’Leary boldly “tried to take the protest straight to Nixon, but was stopped at the Oval Office’s door by H.R. Haldeman [Nixon’s then-Chief of Staff].”

According to this same biography, O’Leary’s first marriage to wife Joyce – who is lovingly, if briefly chronicled in his 1970 memoir The Making of an Ex-Astronaut – was “wrecked” by his burning desire to make political statements at every turn. It can be presumed his activities also didn’t endear him any further to his former NASA astronaut colleagues, who were by large more right of center, with few exceptions. It was apparent some felt that O’Leary, with his nerdy spectacles, love beads, and “flying is just not my cup of tea” insistence, undermined the public image of NASA astronauts as hyper-masculine “fly boys,” chained to their T-38s.

At this point in O’Leary’s life, his path crossed with that of another working scientist who he’d previously met while “auditioning” for 1967’s astronaut group. This scientist had qualified as a finalist for that group, but hadn’t made the final cut: the soft-spoken Dr. Gerard K. O’Neill, physicist from Princeton University.

O’Neill was nearly thirteen years O’Leary’s senior, and by 1967 had already enjoyed a career as a pioneering physicist well before his attempt to join the astronaut corps. A LIFE magazine photo, presumably from the late 1950s or early 1960s, shows a crew-cut wearing O’Neill explaining his invention, the particle storage ring, to a group of fellow scientists at a physics symposium. His profile is barely visible, almost obscured by shadows thrown by an overhead projector in a darkened room. He’d developed an interest in the sciences during a U.S. Navy enlistment begun at age 17, at the height of World War II.

Fast-forward to 1972: O’Neill had turned his gaze from becoming an astronaut to putting practical ideas about space colonization – something only bandied about in science fiction, and considered, well, crazy – into reality. The crew cut had been replaced by the longer, brunette “Spock” haircut that would become his signature look. But he hadn’t had much success in convincing the scientific community that space colonies could be something feasible; a paper entitled “The Colonization of Space” had been rejected by several journals, including Scientific American and Science.

“In the summer of 1972 the problem of getting the new possibilities discussed was becoming serious enough to trouble me considerably. At that time, the rejection-slip process had stretched over more than two years, and the list of publications, yet untried, which would be suitable for a first paper on space communities was becoming rather short,” O’Neill wrote in an appendix to his 1976 book, The High Frontier: Human Colonies in Space. The physicist had no interest presenting his ideas within the pages of science fiction magazines, where they could be misconstrued as whimsy; he was entirely serious about his mission, which was proposed with a question: “Is the surface of a planet really the right place for an expanding technological civilization?”

During this period, O’Neill went on vacation with his children to New York and New England, where, ironically, he found flying very much his cup of tea: “…[In] that month I experienced for the first time the wonderful feeling of release that comes from learning to soar, to fly a sailplane, with its three dimensions of freedom and its intimate interaction between the machine, the pilot, and the invisible, ever-active atmosphere outside.” (Indeed, O’Neill would fly many different types of aircraft during his lifetime.) During this vacation, he and his family stopped to visit O’Leary and Joyce (who were still married at this time), who he described as “old friends.” Here, O’Neill lamented the seeming lack of interest in his ideas from mainstream academic publications. According to O’Neill, O’Leary and another friend, Dr. George Pimentel of Berkeley, “encouraged me to bypass the traditional process of academic publication” with the words “take it to the people.”

O’Leary arranged a lecture at Hampshire College, where he was then teaching astronomy, to further O’Neill’s ideas and to bolster his friend’s flagging spirits. O’Neill managed to fit the lecture into his tight teaching schedule at Princeton, and via O’Leary’s word-of-mouth promotion, the talk was “well-attended by students and faculty.” “The response from the students was strong and positive, enough to give me courage to continue,” he later related, and the room was packed with about two hundred people, eager to know more about space colonies. O’Neill would gratefully write later, “Dr. O’Leary had been responsible for the first Hampshire College lecture on the humanization of space.” O’Leary’s gesture – partially to enterprise discussion about space colonies, partially to increase his friend’s confidence following numerous rejections and slammed doors – would be the first in a chain of events that would lead to the middle-aged Dr. Gerard K. O’Neill becoming a sci comm rock star, years before “sci comm” was even a thing.

It might seem unusual that O’Leary and O’Neill were friendly, given their age difference and disparate personalities. However, O’Leary was John Lennon’s Plastic Ono Band to O’Neill’s Imagine – one scientist functioned as a political primal scream, while the other scientist had a similar message, but it was a message covered in orchestral strings and more ornate language. While O’Leary’s political involvement during the Nixon administration could be characterized by some as “radical,” O’Neill’s message – establishing habitats on other worlds, all the while tackling the very real problems encountered on Earth – was arguably just as radical for its time.

Many of O’Neill’s lectures (including one available on YouTube through the Space Studies Institute, entitled “The Vision Uncut”) touch upon the issues beginning to crop up in the national (and international) consciousness during the 1970s – the scuttling of the environment, deforestation, the proliferation of nuclear weapons, and concerns about the lack of sustainable resources and energy. Throughout the Nixon, Ford, and Carter presidencies, these were hot button issues discussed from political debates to the nightly news. O’Neill could’ve protested alongside O’Leary, but the path he chose was more subtle. He was able to communicate in a way that made concerns about these very real problems understandable to many different types of crowds, and in a way that wasn’t reactionary or shrill to more conservative audiences.

While O’Leary may have been storming the White House intent on getting an audience with Nixon while wearing Nehru jackets and peace signs, O’Neill quietly – and very shrewdly – made his own protests via his visions of Utopian space colonies that were beautiful and aesthetically pleasing, while offering solutions to crowds increasingly disillusioned with what the Earth had to offer. He was offering a surprisingly practical alternative to an increasingly embattled world rocked by energy crises, hijackings, and scandals, and doing it calmly. This allowed him a larger, more diverse fan base. The fact that he was a military veteran who dared to suggest that nuclear weapons doomed existence upon Earth was hugely radical. Also, the very idea of a middle-aged (O’Neill was in his forties during this time) professorial type becoming a quasi-celebrity based on his ideas about space colonization was revolutionary in itself; during the 1960s, “space celebrities” were generally fighter jock astronauts – ironically a group he once aspired to belong to (and that unceremoniously bounced O’Leary).

O’Neill’s ideas – which were aided by O’Leary’s support – also resulted in the formation of one of the first modern examples of a space activism group, the L5 Society, which was begun in 1975 by Carolyn Meinel and Keith Henson. The couple had become familiar with O’Neill’s work, because the during the previous year, “The Colonization of Space” had finally found a publisher and an audience in Physics Today. In 1985, the L5 Society would merge with the National Space Institute, which would morph into the modern day National Space Society (NSS) in 1987. By the way, “The Colonization of Space” is still viewable through the NSS’ website.

With the much longed-for publication of his article, O’Neill’s ideas would finally be realized as not altogether too fantastical, and with the creation of the L5 Society, he would surprisingly turn into one of space fandom’s biggest cult heroes. In the next installment of This Space Available, we’ll see how O’Neill’s work found supporters at mid-Seventies NASA, and how his celebrity continued to skyrocket, culminating in appearances in People magazine and on Johnny Carson’s Tonight Show. In addition, the ideas enterprised in his 1974 paper would be expanded into the book-length The High Frontier. We’ll also catch up with O’Leary, who came to Princeton with O’Neill following his divorce from Joyce – and whose career began to diverge wildly from that of O’Neill’s, resulting in a differently-viewed legacy.