The winners of the grand prize in the 2009 NASA/NSS Space Settlement Design Contest have been nicely written up in the press.

Eric Yam, a Toronto high school student, was featured in an article in the Toronto Globe and Mail.  Eric shared the grand prize for his modular design called “Asten,” which is 1.6 kilometers long, 1 kilometer wide, and could be home for 10,000 people. An illustration is shown below. 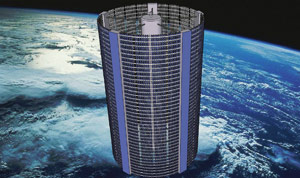 Eric’s complete design submission is available on the NASA and NSS websites as a 12-MB PDF file. He will be a guest at the International Space Development Conference in Orlando at the end of May.

Sharing the grand prize were Pooja Bhattacharya and Swastika Bhattacharya of Orissa, India. They were written up in an article in The Times of India.  ODISA: Orissan Design Inspired Systems and Aerovehicles was the title of their submission.