Dr. Greg Autry has this week been appointed to the newly created position of NSS Vice President for Space Development. In this role he will work on publicity and fundraising and have a special focus on representing NSS to industry, to NASA, and to the media. Greg is a politically connected advocate for nonpartisan space policy and a gifted public speaker who frequently appears in a wide variety of media.

Since his days as a “young nerdling” (his words), Autry has become a trailblazer in the space field. He is the director of the Southern California Commercial Spaceflight Initiative (SCCSI), and has spent his career focusing on entrepreneurship in the context of commercial spaceflight. In addition, his résumé includes serving on the Presidential Agency Review Team at NASA, a stint as the interim White House Liaison at the space agency, and teaching at the University of Southern California. Last year Autry was elected to the National Space Society Board of Directors, and this year will chair the International Space Development Conference (ISDC), which is being held at the Sheraton Pentagon City Hotel in Arlington, Virginia, from Thursday, June 6 to Sunday, June 9. This year’s event is themed “Back To The Moon To Stay,” which hearkens back to Autry’s love of the Apollo Moon missions.

Autry’s love of spaceflight was spurred by classic science fiction, and what he recalled as “a positive, inspirational experience I’ve carried with me my whole life,” the 1969 Apollo 11 lunar mission. “I think like a lot of people my age…we were the disappointed Children of Apollo,” he said with a laugh. “I was six, sitting in front of the television, watching Buzz [Aldrin] and Neil [Armstrong]. Space offered me an outlet to another world that was peaceful, orderly, and exciting…. Obviously I wasn’t the only one inspired by that moment, but I really think it was important.”

In the early 2000s, Autry’s gaze turned from business to commercial spaceflight as operations such as SpaceX, Blue Origin, and Scaled Composites began to ramp up. “I began writing about it in the popular press in newspapers such as the ‘Baltimore Sun,’ the ‘Philadelphia Enquirer,’ and the ‘San Francisco Chronicle.’ I just kept doing that, and wrote about what I felt was the importance of leveraging economic development possibilities in the commercial sector to do what we want to do in space,” he said. Ever since then, he has been an advocate for using commercial spaceflight to bring costs down, while still supporting enterprising scientific study and exploration. Autry also contributes regularly to “Forbes,” serves on the editorial board of the “New Space Journal”, and wrote “An Analysis of U.S. National Competitive Advantage in Human Orbital Spaceflight Markets” for the FAA Office of Commercial Space Transportation (AST). 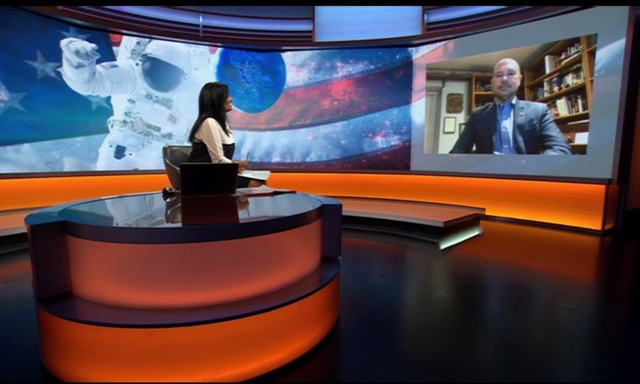 Autry being interviewed about space by the BBC.

While traditional spaceflight has always used commercial vendors to build spacecraft and launch vehicles, “NewSpace” has truly lived up to its moniker, representing a radical departure from previous programs. Autry explained, “What’s different about the relationship with companies like SpaceX or Orbital ATK under Commercial Orbital Transportation Services is the government said, ‘We want a service to do this,’ and they specified the service requirements and the performance, but they didn’t specify the vehicles and mechanisms. They did not protect the vendors from failure. They set milestones and if you didn’t achieve these milestones, you’d be eliminated.” That being said, Autry has no interest in participating in what he calls “the Space Wars.” “I don’t want to argue about robots versus people, I don’t want to argue about NewSpace versus traditional, and I don’t want to argue about the Moon versus Mars. We can do all of these things; they all have their place. There will always be tension—which is good, right?—in competition for different ways of doing things,” he said.

As an educator, Autry is mindful that inspiring young people is key. “We need to engage them more directly. We’ve got a lot of beautiful pictures, and that’s great…but we need to get people out to actual rocket launches. You go to a SpaceX launch out in Vandenberg, or a United Launch Alliance launch out at the Cape, and I see the same people. We need to find ways to bus in more kids to see them. When you see the power of that, and all the people who are involved in making it happen, I think it’s awe-inspiring. There are also opportunities to do more payloads; some don’t have to be as scientifically serious as they have been in the past, because the capacity is going to be so much bigger…there will be a chance to fly much more interesting payloads, and not just related to science,” he said.

Autry’s background as an educator aided him in his role at NASA, because he and his team worked to “translate” spaceflight to dignitaries. “The trick of translating policy, space engineering, and space science–what is going on¬–was the job of the transition team. I think we had a great team to do that. We had to make presentations, and go to the Vice President [Mike Pence]. Lucky for us, the Vice President is interested in space…he gets it, and has an interest in the public/private partnership perspective. We were very successful in that. We increased NASA’s budget…and there was very little disruption to programs,” he related. “I think the team can take some credit in explaining to [President Trump and Vice President Pence] why it’s important, and how it brings prestige to the administration.” It bears mentioning that Autry’s role during this transition was not motivated by any political affiliation: “[It is] my belief that although space policy is super important, it is nonpartisan,” he emphasized. 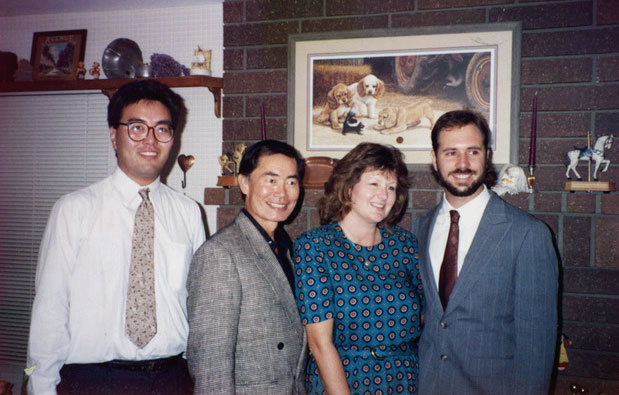 A former member of the L5 Society, Autry is well aware that “a grassroots organization can change public policy in a significant way, and can even have national outcomes.” This is why NSS aligns with his own personal vision. He added, “I continue to work that way within space, and other policy areas. I wanted to join NSS as soon as I came back from Washington, D.C., because it gave me the opportunity to leverage that grassroots motivation to keep pushing space forward. I don’t want to lose the small amount of momentum we’ve got going right now.”

With private spaceflight firms innovating the way we view spaceflight, and NASA making gains in furthering human and robotic exploration, Autry sees the present time as “the biggest moment in space probably since the Apollo era. The amount of enthusiasm in people who want to do something with space is great, and that’s why I want to be here!” Autry’s experience, knowledge, and enthusiasm is already leaving its mark upon both spaceflight and NSS.