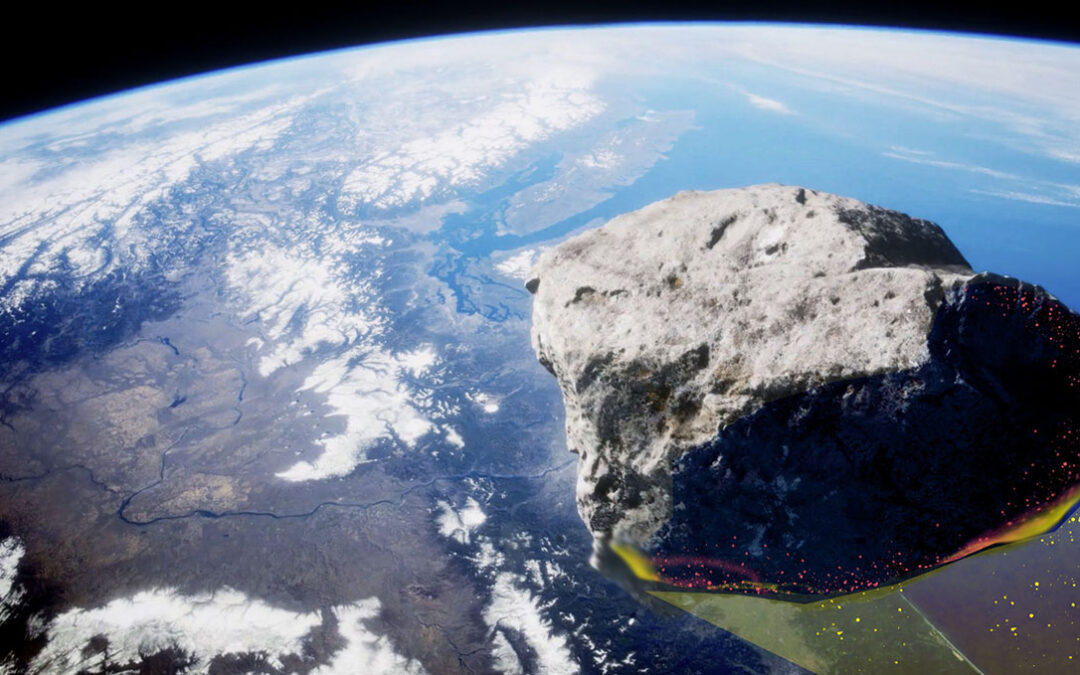 The National Space Society, based in Washington, D.C., recently partnered with the Planetary Society, based in Pasadena, CA, to create a joint statement urging Congress to support NASA’s Near-Earth Object Surveyor (NEO Surveyor) mission. The proposed $130 million cut in funding would seriously delay this planetary defense initiative and could ultimately jeopardize its success.

NEO Surveyor, which has been on the drawing board in one form or another since the mid-2000s, is an orbiting telescope designed to identify and pinpoint dangerous asteroids that threaten Earth. Near-Earth Asteroids in particular pose a grave risk to our planet—an impact of such an object wiped out the dinosaurs 66 million years ago. Even a much smaller impactor could disrupt food supplies and agriculture for years, killing millions. Missions like NEO Surveyor are intended to help us protect ourselves from a similar event, one which is statistically overdue.

“Planetary Defense is critical to the future of humanity on this planet,” said Randy Gigante, the chair of the NSS Policy Committee. “NSS and the Planetary Society both understand the importance of funding the NEO Surveyor program to more quickly locate the large asteroids that could impact the Earth and have adequate time to deflect them. There is nothing more important than this initiative to protect our planet, and we are happy to join forces with the Planetary Society in this critical effort.”

This letter to Congress reflects the urgency the two largest member-supported space organizations in the world place on this mission. NEO Surveyor is not merely an interesting science program we can casually push off into the future—it’s a planetary defense strategy to keep Earth, and therefore humanity, safe from a potentially devastating asteroid impact.

If you would like to join us in support of NEO Surveyor, you can learn more about our efforts here, and you can make your voice heard in Congress via this form.

The joint letter from the NSS and the Planetary Society follows:

To the Members of the House and Senate Appropriations Committees:

We are writing the congressional appropriations committees to raise awareness of an important decision facing Congress in the FY 2023 budget cycle.

It is regarding NASA’s Near-Earth Object (NEO) Surveyor mission, a small space telescope dedicated to the detection and characterization of comets and asteroids that could pose a danger to the Earth.

In FY 2022 Congress appropriated $143 million for this project, supporting a 2026 launch date. Once launched, the spacecraft is expected to discover tens of thousands of near-Earth asteroids (NEOs) at a rate and with a degree of detail unachievable by ground-based telescopes. It is the fastest method to satisfy the congressional mandate to detect 90% of NEOs 140 meters and larger. Absent NEO Surveyor, NASA will not achieve the congressional detection mandate for another 30 years.

Unfortunately, the President’s FY 2023 Budget Request for NASA proposes to slash more than $130 million from this project in mid-development, delaying its launch by at least two years and increasing its total cost to U.S. taxpayers by an unknown amount.

As leaders of the world’s two largest independent space outreach organizations, we are dismayed by NASA’s proposal to delay and disrupt this critical public safety mission.

We urge the committee to restore funding and augment NASA’s budget to provide at least $170 million to NEO Surveyor in FY 2023.

NEO Surveyor is possibly the most-endorsed mission of its kind. The National Academies of Sciences, Engineering, and Medicine endorsed the need for a space-based NEO telescope in a dedicated 2019 report. More recently, the 2022 Planetary Science Decadal Survey stated that “NASA should fully support the development, timely launch, and subsequent operation of NEO Surveyor.” Congress has repeatedly acted in a bipartisan manner to support this mission and NEO detection work. And polls consistently demonstrate that the public expects NASA to prioritize the search for hazardous NEOs.

As we continue to recover from the pandemic, we believe that the U.S. should heed its lessons and make common-sense investments in technologies that help us avoid (or properly prepare for) future catastrophes. We believe that augmenting NASA’s budget by at least $130 million to properly fund NEO Surveyor at $170 million (less than 1% of the agency’s total request) is a smart and cost-effective investment in our future, is aligned with overwhelming expert opinion, and is responsive to the directives of the people and their representatives in Congress.