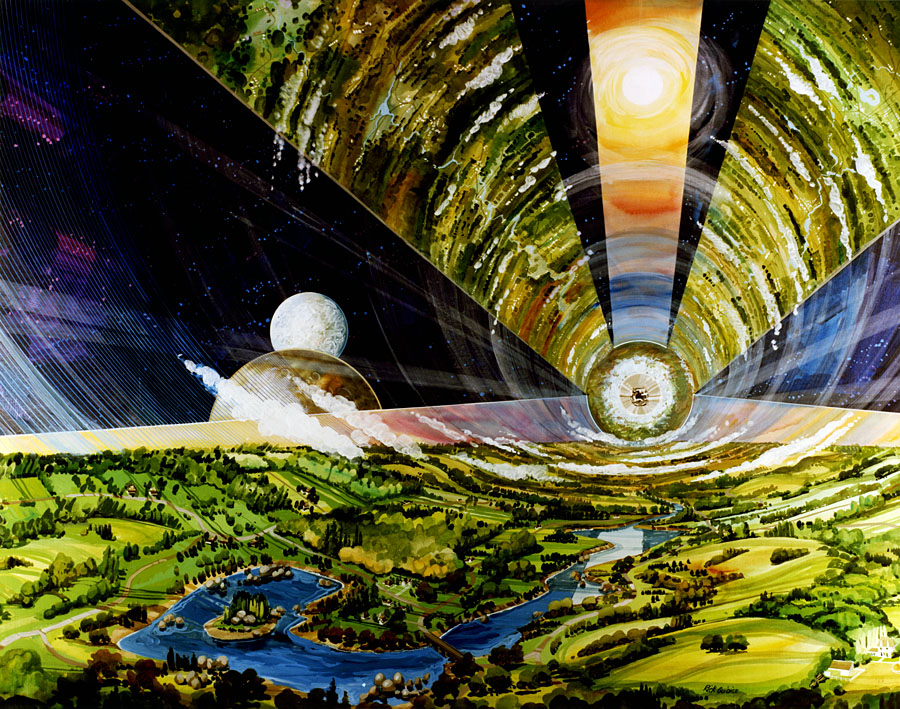 This art portrays an O’Neill space settlement which might be built in orbit around almost any star.

By combining the ideas described by Professor Lubin of the University of California Santa Barbara in a recent Ad Astra article with those in two of my earlier Ad Astra columns, substantial progress towards interstellar settlement becomes apparent.

In his article and in some of his more detailed work in particular (http://www.deepspace.ucsb.edu/wp-content/uploads/2015/04/A-Roadmap-to-Interstellar-Flight-15-w7-4-TOC.pdf), Lubin describes a system made possible by recent advances in the fields of directed energy and miniaturization. It involves a group of lasers that accelerates a gram-sized interstellar spacecraft to more than 20 percent of the speed of light. The nearest star can be reached in 20 years. The gram-sized spacecraft includes a nuclear power source, thrusters for maneuvering, cameras, an array of additional sensors, and a system that allows communication to and from Earth over interstellar distances. Lubin’s plan involves substantial technical advances, but these are advances that his team believes can reasonably be made within the next 30 years.

The gram sized spacecraft is of great importance. The laser acceleration system is not the only way to propel a tiny spacecraft. My two columns (space.nss.org/interstellar-space-settlement/ and space.nss.org/interstellar-space-settlement-made-easy/) discuss two keys that, when taken together, amount to a paradigm shift, which reduces the difficulty of interstellar settlement by orders of magnitude. The first key is to build O’Neill space settlements from asteroidal and/or cometary materials in our Solar System. This technology can then be used in other stellar systems to build settlements. Given the consensus that nearly all stars have substantial asteroidal/cometary resources, then nearly all stellar systems can be settled—not just the very rare Earth-like planets that are thought to exist in a tiny number of stellar systems. Consequently, the likely distance to the nearest stellar system that can be settled is dramatically reduced.

The second key is to take advantage of the extremely rapid development of CANB technologies (computers, artificial intelligence, nanotechnology, and bioengineering) to reduce the weight of spacecraft that can accomplish an interstellar settlement mission. A small spacecraft is much easier to propel than a large spacecraft. Given the plausible CANB technologies that will exist 100 years from now (and perhaps in much less time), we may be able to avoid sending humans and instead send tiny payloads, dramatically smaller than a human. For example, we could send nanites (tiny self-replicating intelligent robots) that, once reaching another star, use its asteroidal/cometary materials to greatly increase in numbers and then build O’Neill space settlements. The nanites then populate the space settlements with humans using one of many possibilities, such as: fertilize human eggs with sperm brought in the original spacecraft and raise the first generation of children; instead of fertilizing eggs, develop children from human DNA brought on the original spacecraft; instead of DNA, use information about how to create human DNA; instead of children, build adult human bodies to which human minds are downloaded from minds stored in the spacecraft’s computer; instead of using nanites to build the space settlements by themselves, use human minds stored in the computer to direct the nanites’ efforts to build space settlements. Lubin’s work is a major step in the direction of building the tiny spacecraft needed for these possibilities—and hence, interstellar settlement.