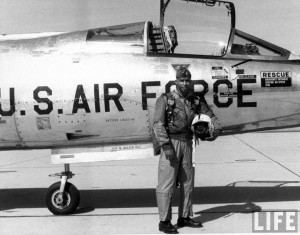 USAF Major Robert H. Lawrence in an undated LIFE photo. Lawrence’s life and career would leave resonances, despite both being cut painfully short.

There were big names within their ranks including Bob Crippen, Henry Hartsfield, Bo Bobko, Al Crews, Richard Truly, and Gordon Fullerton. But the MOL (Manned Orbiting Laboratory) Men also boasted another big name: United States Air Force Major Robert Henry Lawrence, Jr. In June 1967, Lawrence became the United States’ first African-American astronaut with his selection to this program. Yet over 50 years after his death, he remains all too obscure.

When Lawrence was selected, he arguably was one of the most qualified astronauts to have been named to date. He was not only a senior Air Force pilot with over 2,500 flight hours to his name (including many in the Lockheed F-104 Starfighter), but he also had earned a doctorate in chemistry from Ohio State University. Few astronauts at that time held a doctorate. Both the Air Force and NASA later went on to state that Lawrence’s work in the Starfighter helped lead to the development of the ultimate space plane, the Space Shuttle. He had also completed test pilot training at Air Force Flight Test Pilot Training School at Edwards AFB, California.

But six months following his astronaut selection, tragedy struck. Lawrence, who had been flying backseat as an instructor, was killed ejecting from a Starfighter on December 8, 1967. He was only 32. The MOL program was canceled in 1969; many of its astronauts were re-absorbed into NASA’s ranks. Had Lawrence lived, he most likely would’ve been among the first wave of shuttle pilots/commanders, which included many of his MOL colleagues. It wouldn’t have been out of place to have seen Lawrence perhaps sitting alongside John Young during STS-1.

On December 8, 1997, Lawrence’s name was rightfully added to the Space Mirror Memorial at Kennedy Space Center. Twenty years later in 2017, his colleagues, his family, and other space pioneers honored Lawrence at a tribute held by the Astronauts Memorial Foundation. NASA astronaut and former agency administrator General Charles Bolden enthused, “He is one of the giants on whose shoulders I stand. He was the first, but definitely not the last…he was undeterred by segregation and discrimination that he would find at every turn.”