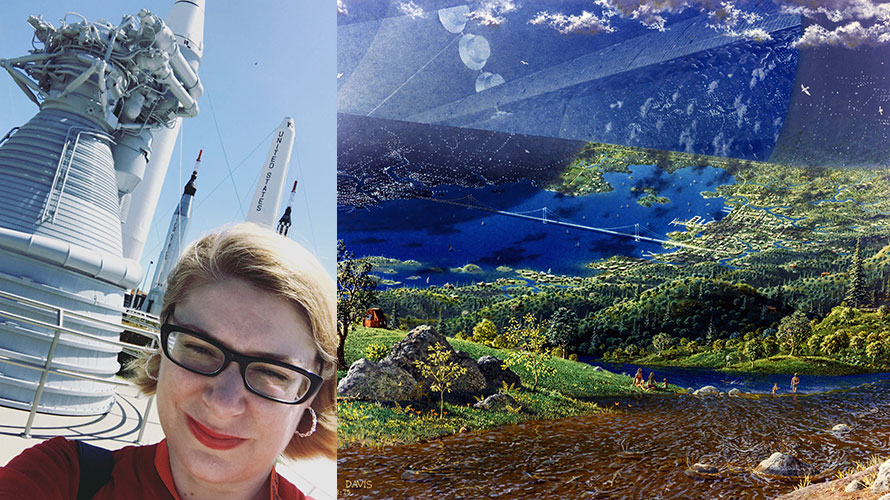 On May 13, 2021, the Huntsville Alabama L5 (HAL5) Society hosted space enthusiast and writer Emily Carney, who presented “Gerald K. O’Neill and the Future that Calls Us.” O’Neill, a physicist at Princeton, influenced founder of Blue Origin and Amazon.com Jeff Bezos, who just announced a donation of one million dollars to the National Space Society. Bezos was a Princeton graduate, attended O’Neill’s seminars, and headed the campus chapter of Students for the Exploration and Development of Space.

Dr. Gerald K. O’Neill led a progressive professional life. He began as a radar technician in the Navy, gained a Ph.D. in high-energy particle physics, became a physics professor at Princeton, applied to but did not make a 1967 astronaut class, organized two conferences—First Conference of Space Colonization (May 1974) and Princeton University Conference on Space Manufacturing (May 1975)—and founded the Space Studies Institute at Princeton (1977). From 1974–1977, O’Neill’s ideas gained respect, recognition, and funding where that timeline’s need for resources on Earth aided his popularity.

O’Neill published his first paper “The Colonization of Space” in Physics Today (1974) after four years of trying and then his books The High Frontier: Human Colonies in Space (1977) and 2081: A Hopeful View of the Human Future (1981), which accurately described future inventions. O’Neill’s popularity gained him mention in the New York Times (newspaper and magazine) and National Geographic and a guest appearance on The Tonight Show Starring Johnny Carson.

O’Neill had ideas to build human settlements (O’Neill cylinders) at Lagrange points 4 and 5 (L5 colonies). O’Neill designed the mass driver, an electromagnetic catapult, which would shoot mined Moon resources toward L5. O’Neill’s ideas inspired one of the biggest grassroots movements in the space community, the L5 Society (1975), which latter joined with the National Space Institute to form the National Space Society (1987).

On May 1, 2021, NSS of North Houston started with NSS North Houston President Nathan Price introducing himself and then his cohost Mahsa Esfandabadi where they both described their professional and space roles. NSS of North Houston Vice President Dr. Greg Stanley adeptly adds background information as he delivers this month’s space news (online PDF) where all of his posted space news can be found at this link. Dr. Stanley creates an enjoyable, succinct space news experience.

Next, Ben Huset, a professional in information technology for NASA and Federal Aviation Administration contractors and a promoter of space travel and space technology, presented “China in Space from Wan Hu to Tianwen-1.” Huset gave a robust view of China’s space history and of the individuals and entities who have contributed or currently contribute to China’s space program. He described the “Father of Modern Chinese Rocketry” Qian Xuesen’s life and accomplishments. He included detailed illustration with graphs of national launch and rocket markets along with maps of China’s launch sites. Huset encompassed the first launch of China’s Dongfeng-1 rocket in 1960 to the advancements of the Shenzhou missions 1–11, Chang’e missions 1–6, and the Tianwen-1 mission for Mars. For the future, Huset mentioned China’s plans for a Space Station 921-2 Tianhe, the Moon in 2030, and China’s Mars Simulation Base (likened to Space Camp in the U.S.). Within the presentation, Huset noted that the “Wolf Amendment prohibits most bilateral cooperation between the U.S. and Chinese space programs.”