Review: Everyone Needs to Let “Apollo 11” Take Them to the Moon and Back 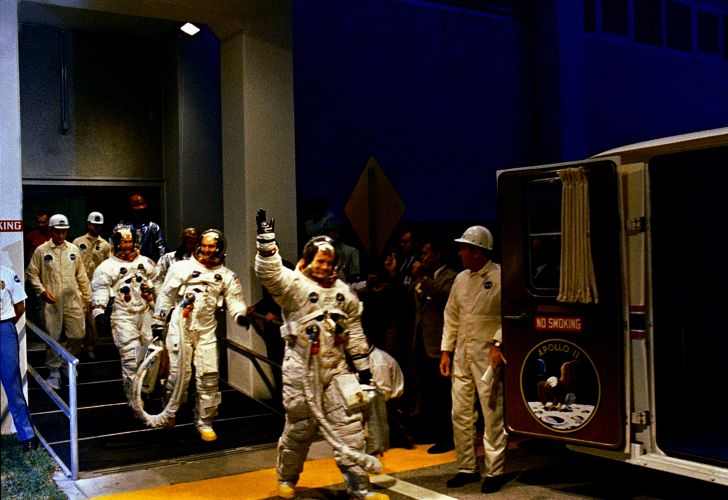 What ever happened to those faces in the old photographs
I mean, the little boys…
Boys?…Hell they were men
Who stood knee deep in the Johnstown mud
In the time of that terrible flood
And they listened to the water, that awful noise
And then they put away the dreams that belonged to little boys

Note: minor spoilers included in this review. The new documentary Apollo 11, directed by Todd Douglas Miller, manages to stun the viewer less than two minutes into the film. The movie opens with footage of a “crawler” vehicle making the slow journey to Pad 39A at Kennedy Space Center (KSC). At first, the viewer doesn’t see what the crawler is carrying; a “USA” painted on what looks to be a giant black and white cylinder gives a clue.

Then, there’s the big reveal: all along, the crawler was carrying a giant Saturn V rocket, primed and ready to carry three Apollo astronauts to the Moon. This approach allows the viewer to gain a sense of how mammoth an undertaking the Apollo lunar missions were and still are; the filmmaker forces you to drink this all in. Apollo 11 doesn’t shy away at making one understand – through beautifully high-resolution footage, with no outside narrator – that humankind’s first lunar landing mission was a massive, sober undertaking.

Cut to footage of Neil Armstrong, Michael Collins, and Buzz Aldrin being suited up on the morning of July 16, 1969’s launch. The surprise here is how serious this undertaking is – the crewmembers aren’t cheesing it up with huge, joyous grins, thrilled to get a high-voltage ride on the Saturn V. The look on each astronaut’s face is one of determination and focus, not of joy and excitement. This footage is interspersed with shots of the firing room at KSC, and, in contrast, we see the thousands upon thousands of stirred-up spectators lined up along the shores of Titusville, Florida, and at the KSC press site. This effect underscores the fact that these three astronauts – and the thousands of personnel behind their mission – bore the weight of massive expectations from the public, and ultimately the world.

Many Apollo and spaceflight-related documentaries are at the mercy of the knowledge of their consultants; for example, there are tons of Skylab-related documentaries that get the timeline of its launch-related injuries incorrect. However, thanks to historical and technical advisors including Stephen Slater, Robert Pearlman, and Ben Feist, the launch sequence is accurate, and manages to bring the audience to its knees: will each stage happen as planned? As a result, even though the viewer can easily discover how Apollo 11 unfolded via the Internet, the suspense makes one feel like they’ve never seen anything related to the mission before. While the film has no outside narrator, simple yet concise line graphics illuminate each mission milestone, giving insight into the complexity and value of each step.

There are more unexpected surprises revealed by Apollo 11. As the mission progresses right down the line (save for a few 1202 and 1201 alarms during powered descent), it’s fun to hear the banter between the crew and Mission Control, and the in-flight banter between Armstrong, Collins, and Aldrin. Perhaps the biggest surprise for this space author was how the movie finally gives Collins the spotlight. Many spaceflight documentaries focus on Armstrong and Aldrin, the moonwalkers, who naturally became bigger celebrities. However, the viewer gains a real sense of how busy and involved Collins’ role as Command Module Pilot really was, and how he approached his unique role in history with wit and humility.

From launch to splashdown (and a little beyond), Apollo 11 allows the viewer to experience the mission and the people in a way few documentaries have done. It possesses similarities to Al Reinert’s For All Mankind in that both movies allow the stories to tell themselves, but Apollo 11 is less stream-of-consciousness and more cohesive. In addition, the film itself is beautiful, and it’s thrilling to see the mission through a clear lens (much Apollo footage on, say, YouTube is grainy at best).

As we approach the 50th anniversary of the signature mission that brought humankind to the Moon’s surface for the first time, space enthusiasts and people from all backgrounds should let Apollo 11 take them to the Moon and back.