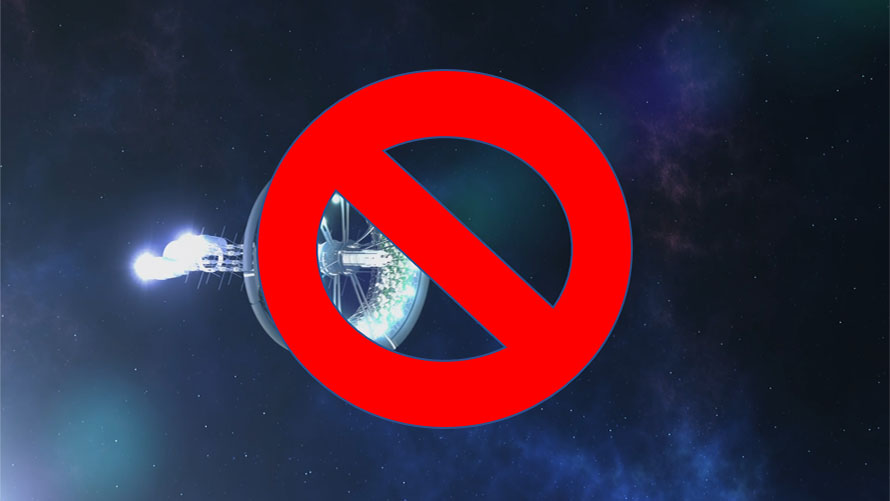 There is an old cliché that new ideas go through three stages: (a) first they laugh, (b) then they fight, and (c) eventually those who laughed at the new idea and then fought against it claim it as their own. For a long time, space settlement has been in the “laughter” stage—simply not taken seriously by more than a small community of advocates. We are now moving into the “fight” stage, and Rudolph Herzog’s documentary LAST EXIT: SPACE is the latest volley against space settlement. Narrated by Werner Herzog (Aguirre, the Wrath of God and many other films and documentaries), LAST EXIT is slick and even beautiful, shining a light on unfamiliar individuals and incidents. However, let there be no doubt—the Herzogs are producing propaganda with no respect for truth.

The main “trick” Herzog uses to mock the idea of space settlement is to show a series of vignettes of ascending craziness level, concluding with a look at a cult that believes they are descendants of aliens from the star Capella. This last segment betrays the rotten core of LAST EXIT, which is to portray space settlement advocates as loony-bin inhabitants suffering from moral and mental decay. The “Capellans” are clearly deluded, and have nothing to do with any kind of serious discussion of space settlement. They are included to create a kind of “insanity by association” impact on the viewer.

Another “trick” Herzog employs is to lay out a problem facing space settlement, present an appealing solution, and then demolish that solution with as big a hammer as he can find. This creates the impression that the idea of space settlement is being thoroughly demolished, when in reality Herzog has created a “fish in the barrel” exercise that ignores all the other possible solutions, and in most cases uses false/or misleading arguments as the “hammer.” It is not surprising that LAST EXIT: SPACE is appearing only on the “Discovery+” streaming channel, which despite some excellent programming also includes a number of pseudoscientific “reality” shows.

The third “trick” rolled out is to spend only a short part of the documentary on serious, short term, and relatively plausible plans for building a city on Mars, while most of screen time is devoted to interstellar colonization, something far more difficult. Herzog’s attack on anti-matter starships is similar to a writer in ancient Egypt complaining that chariots will never travel faster than a horse can pull them, and will thus not support long journeys. The statement is true, but wildly premature. It’s actually worse than that, since Herzog spends a lot of screen time explaining how CERN is a very inefficient anti-matter factory that cannot plausibly produce the anti-matter needed for an interstellar journey before the end of the universe, without mentioning that no serious advocate of anti-matter rockets suggests using CERN to produce anti-matter since [drum roll] CERN is not designed to produce large amounts of anti-matter.

A related “trick” is to treat the possibility of interstellar colonization as something being advocated in the near term, when in fact it is a project for a future solar-system-wide civilization as advanced beyond our current capabilities as we are beyond ancient Egypt. In this future—which is 100s if not 1000s of years away, anti-matter might be produced by automated factories orbiting the sun inside the orbit of Mercury. The anti-matter starships, generation ships, and hibernation technology Herzog looks at only to demolish will have been advanced far beyond the faltering baby-steps he presents only to mock. But these three ideas are only a few of the possibilities, and only one of them needs to work.  But the most fundamental error Herzog makes is that by skipping over the “settle the solar system” part he creates a “fish in the barrel” exercise. He is absolutely correct—our current capabilities are not up to interstellar colonization. This is why interstellar colonies are Step #30 on the NSS Roadmap to Space Settlement and not Step #2. He is, in effect, arguing that ancient Egypt can’t build a Moon rocket.

There are some further tricks employed in LAST EXIT: SPACE. In particular, rhetorical ad hominem attacks on space settlement abound. Various speakers attack a “straw man” conception of space settlement with terms like “exploitation” and “locusts” to suggest that space settlement is inherently destructive.  In a particularly egregious attack, it is suggested that Elon Musk will turn Mars into a slave colony while he stays on Earth, using his control of oxygen and food supplies to enforce long working hours on his Martian employees. Given that U.S. law will control working conditions in any Martian city Musk builds, and Musk remains on Earth, subject to U.S. law, this dystopian vision is revealed to simply be propaganda.  Similar suggestions are made with regard to Bezos, i.e., that the space colonies he constructs will resemble Amazon warehouses. This seems unlikely, but regardless, they will be subject to U.S. law all the same for decades and even centuries to come.

LAST EXIT: SPACE is stuffed with factual errors and dubious declarations. Anti-matter rockets are presented as being unrealistically useful in enabling interstellar travel. Marshall T. Savage, author of The Millennial Project: Colonizing the Galaxy in Eight Easy Steps [1994], is described as “…the world’s most fervent prophet of space colonization” which is at best misleading. There are many candidates for this title, but Savage wouldn’t make my top ten list. I am fairly sure footage from the movie Gravity was borrowed to dramatize a Mir accident. And so on.

Another running theme is the cramped, uncomfortable, and dangerous nature of space travel. This is returned to over and over again in different contexts, as though it was being proposed that Martian settlers would live in an Apollo capsule on Mars. Yes, it is true that if you stuff small groups in tiny cans, problems result. Putting one woman and seven men in a can for 90 days leads to problems. Shocking, simply shocking!!  If a settlement is to be at all successful, the “cramped quarters” stage is going to be short-lived. Also, there is an enormous difference between designing a home in space, designing a scientific camp, and designing a spartan spaceship. One thing I thought was particularly funny was Herzog’s focus on settlers drinking “recycled urine,” as though the water on Earth has not passed through an endless number of urinary tracts over the last billion years or so.

Lastly, there is no mention of Gerard K. O’Neill and free-space settlements in LAST EXIT: SPACE. Given O’Neill’s vast influence, this is a curious omission. It is unclear if free-space settlements were skipped since Herzog did not take them seriously, or because he found that he could not easily demolish the idea with a potted story.

The participation of the father and son Herzog team in this project should not be a surprise. Werner Herzog’s films often focus on how human ambitions lead to disaster, as for example, in Aguirre, the Wrath of God. His is a deeply pessimistic view of human potentiality, so this attack on space settlement is par for the course.

A final thought with regard to why the Herzogs are so focused on interstellar colonization:  they have a fear that excitement about exo-planets will lead to a growing mass interest in space settlement. When the images of the real Mars and Venus came back from early space probes in the 1960s, a lot of wind went out of the sails of the space movement. This excitement was to a large degree restored by O’Neill’s vision of free-space settlements with Earth-like conditions, but a bleak Mars and a hellish Venus are still downers. More recently advanced space telescopes have revealed about 4,000 “exo-planets” around others stars, and perhaps a dozen that might be described as “Earth-like.” These numbers are clearly just a start, and public interest in “other Earths” around distant suns is building. The Herzogs appear to have decided to push back this growing wave of interest by attempting to show that interstellar colonization is impossible.

The good news is that space settlement has come far enough that the Herzogs felt the need to spend a lot of money making it look silly/bad. That’s real progress. Although LAST EXIT: SPACE was interesting viewing for me, please don’t rush out to watch it. The less attention it gets the better.