The National Space Society’s Space Pioneer Award for Art will be presented to Star Trek® motion picture concept designer Sean Hargreaves. This award honors the work he has done in the motion picture industry, especially for design work on the huge space city and Star Fleet base “Yorktown” shown in the 2016 movie Star Trek Beyond. NSS has a vision of space and planetary settlement as part of our real future in space and the Yorktown city depicts an orbital space habitat beautifully. 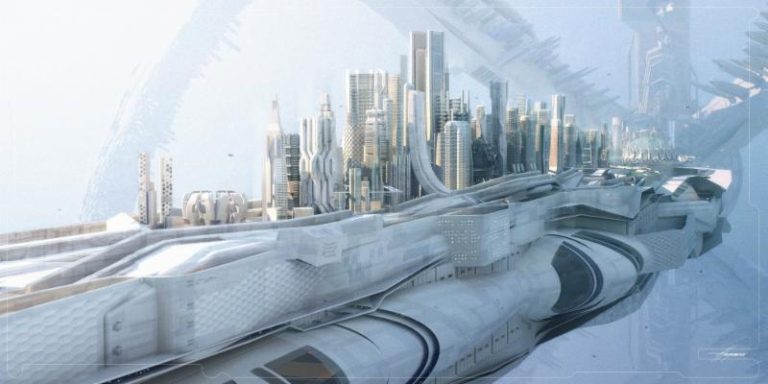 NSS invites the public to come meet, interact and learn from our awardees and attend their award ceremonies. NSS will present the Space Pioneer Award to Sean at our annual conference, the 2018 International Space Development Conference (the 37th ISDC) to be held in Los Angeles, California, at the Sheraton Gateway Hotel at LAX. The Conference will run from May 24-27, 2018.

Sean received a BA in Science from the Art Center College of Design in Pasadena, CA in 1989 and since 1992 has been working on a wide variety of films such as science fiction, horror, action/adventure and thrillers. He has also worked in wide variety of roles, including storyboard artist, matte painter, illustrator, costume design, assistant art director, concept artist, concept design, production design, etc. Some of the films he has worked on like The 5th Element have involved very visually complex scenes with lots of motion and perspective. This work requires a constant balancing act between what can be imagined, what looks realistic, and what is practical to show on the screen.

The Space Pioneer award consists of a silvery pewter Moon globe cast by the Baker Art Foundry in Placerville, California, from a sculpture originally created by Don Davis, the well-known space and astronomical artist. The globe, which represents multiple space mission destinations and goals, sits freely on a brass support with a wooden base and brass plaque as shown at right. The support and base are created by renowned sculptor Michael Hall of the Studio Foundry of Driftwood, TX. NSS has several different categories under which the award is presented each year, starting in 1988. Some of the recent winners of Space Pioneer Awards include Elon Musk, Ray Bradbury, Robert Bigelow, Apollo Astronaut Russell L. Schweickart, Dr. Michael Griffin, the Rosetta Mission Team, the Kepler-K2 Team, and the New Horizons Mission Team.