The Space Shuttle program recently celebrated the 40th anniversary of its first launch, and will soon pass 10 years since its swansong, STS-135. There is now a generation that wasn’t around to see Shuttle launches either in Florida or on television, and regards the orbiter and ubiquitous NASA worm logo of the early Shuttle years as fun retro T-shirt artwork. The existing Shuttles are now museum pieces. The program, once a symbol of America’s technological might, is frequently a subject of think pieces that depict it as an overly-ambitious step back after the Apollo lunar missions.

Enter Marianne J. Dyson, one of the first women flight controllers during the early days of STS, and author of the newly-released Shuttle Mission Control: Flight Controller Stories and Photos, 1981 – 1992. Her newest book is a fascinating, energizing look at the program’s early history, technology, and personalities.

In an excerpt from Shuttle Mission Control’s introduction, Dyson underscored the length it took to bring this book to fruition: “I drafted Shuttle Mission Control in 1990-92 when books were printed on paper and sold in bookstores. My agent and I collected a stack of rejection letters calling it too ‘narrowly focused’ to sell enough copies to make publishers a profit. So the book languished in my closet all this time. Now, armed with decades of experience in publishing, no longer required to satisfy some gatekeeper’s profit margin, and with the help of my writing community…I am publishing it myself. Scanning, color-correcting, and cropping faded photos and slides proved difficult, as was reformatting/merging old text files (from 5.25” floppy disks!) and typing hand-written lists…into a modern document.” 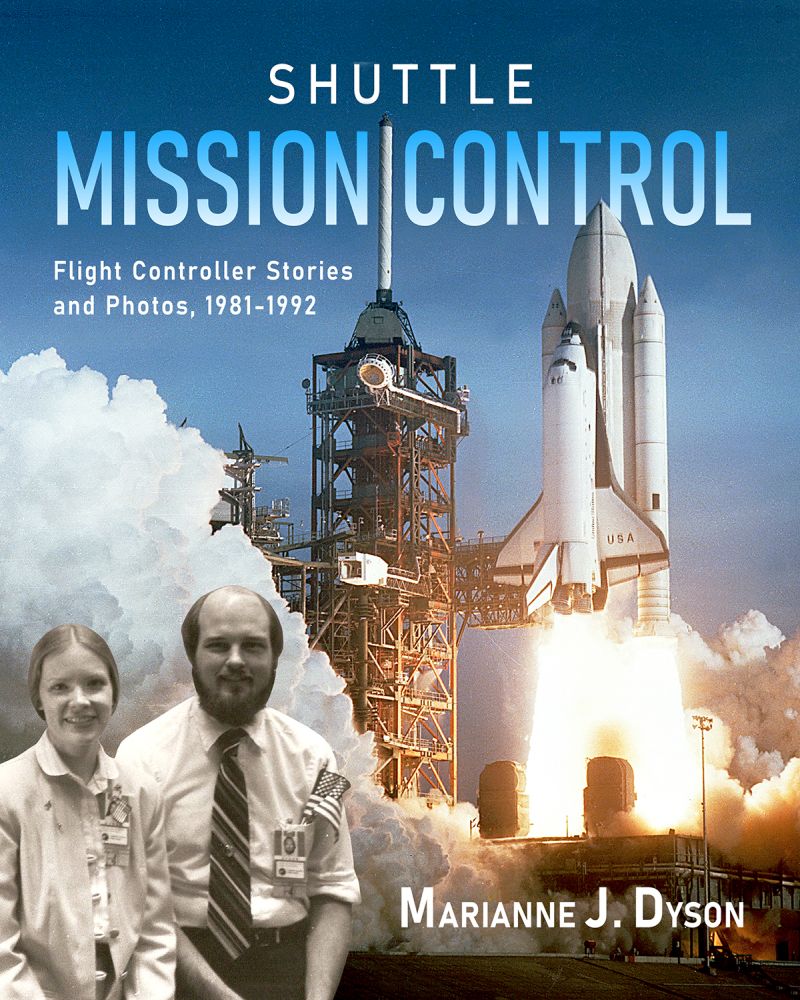 It was worth the wait. The book, while covering the general time span referenced in its title, does briefly cover the history of the Mission Operations Control Room (MOCR) as it went from strength to strength from the Gemini through the Apollo years. Dyson discusses the innovations that, while they may seem laughably primitive now, represented a huge step forward as NASA entered the Shuttle era. While it’s difficult to believe this now, many computer systems during the 1960s did not have monitors; Dyson underscored how NASA developed a Display and Control System to show system parameters in a manner that was convenient to flight controllers during that time.

Dyson writes about how this system was eventually superseded by a Digital Television System, then Display Generation Equipment; if the controllers wanted a screenshot of data at a particular time, he or she could press a “print screen” button – which alerted someone in another room to take a 35 mm film photo of the screen, as digital cameras did not yet exist. This is an engrossing look into how, even as the Shuttle asserted itself as the most complicated, amazing all-electric flying machine of the era, technology was continuing to adapt to the times.

But there’s way more to this book than just discussions about how data was captured in a delightfully retro way. Dyson illuminates each role in Mission Control, from Ground Controller to Public Affairs Officer, and each role comes with a story from someone who worked these consoles. We find out about troubleshooting trajectories, retooling general purpose computers, devising fixes during spacewalks, utilizing the Shuttle’s robotic arm (then a novel addition to a spacecraft), and much more. Shuttle Mission Control also recounts the tough leadership decisions that could make or break a mission. For example, due to Auxiliary Power Unit (APU) issues, flight controller Paul Dye had to make a “no-go” call during an STS-31 launch attempt. While nobody really wanted to be the person to “scrub” a launch, Dye not only had to consider the very expensive payload aboard Discovery (Hubble Space Telescope), but also the lives of the astronauts.

Dyson, who was hired by NASA in 1979 as a Flight Activities Officer, also brings to life the changing gender roles of the late 1970s and early 1980s, when women were integrated more visibly into NASA. Her website showcases not only the MOCR women of the Shuttle era, but also discusses the women of Gemini through present time NASA. It is wonderful to see them and their pioneering accomplishments celebrated.

It’s hard to see why Shuttle Mission Control faced rejections as the stories are spellbinding, and the photos and diagrams are incredible. If Dyson hadn’t cataloged her finds and researched as diligently, this key transitional early Shuttle era may have been forever underestimated, or more tragically, lost. Many fine books have been written about Apollo-era Mission Control, but there are, to this writer’s knowledge, no books that focused solely on the Shuttle MOCR years. The publishers’ losses are now our gain, as Dyson’s newest book is an essential read.