The National Space Society is greatly saddened by the news that renowned space artist and long time advocate for human space exploration and settlement, Robert McCall, passed away February 26 at Scottsdale Memorial Hospital Osborne in his home town of Scottsdale, Arizona. He was 90 years old.

Robert McCall served for many years on the National Space Society Board of Governors. One can see the influence McCall had by going to the Smithsonian’s Air and Space Museum, where his vast mural depicting man’s conquest of the Moon covers an entire wall on the Museum’s main floor, as well as in old movie posters for 2001: A Space Odyssey, and in a two-decade-long series of postage stamps depicting space themes. An art school graduate from Columbus, Ohio, with a lifelong fascination of things that fly, McCall has illustrated the reality and the dreams of the space age since it all began in the 1950s.

Famous for his large murals, Robert was the creator of the Tour of the Universe Mural at the Challenger Space Center in Peoria, Arizona. The mural is six-stories high, encircling the entire interior rotunda of the main floor of the building. Utilizing 27,000 square feet of canvas, this phenomenal piece of artistry took six months to complete and is believed to be the largest mural in Arizona.

Our thoughts are with Louise, his wife of 50 years, his family and friends and all of those who appreciated the man who has shown us what the future would be like if we just believe and work hard enough to achieve our space goals. The Phoenix Chapter of the National Space Society was especially honored to have had Robert join them as an integral part of their Yuri’s Day 2008 celebration at the Peoria Challenger Space Center.

For more on the art of Robert McCall, see mccallstudios.com. 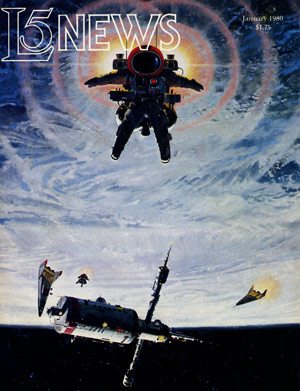 McCall's art graced this cover of the L5 News for January 1980.