SPACE BASICS: What is Space Settlement? 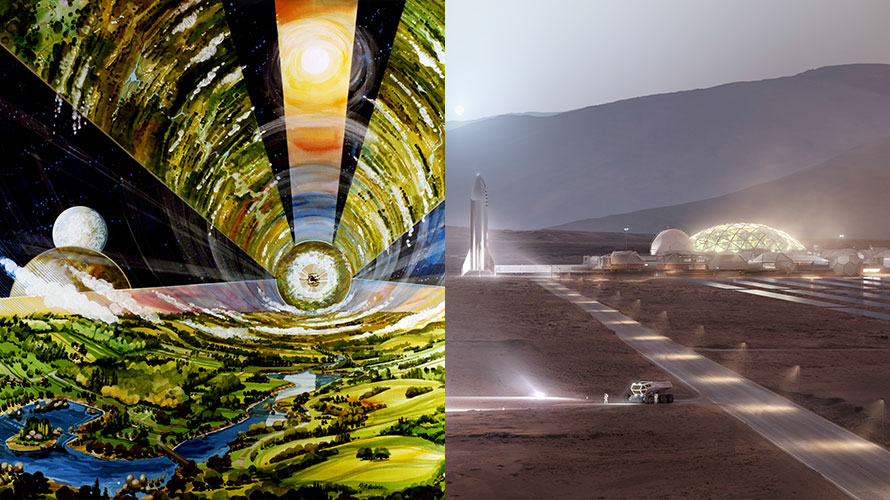 Let’s start with a relevant dictionary definition of settlement—“the settling of persons in a new place.” This definition is almost immediately self-referential, as it refers to “settling of persons.” When we look at “settle” the verb, we see definitions that include “to migrate to and organize (an area, territory, etc); colonize,” “to cause to take up residence,” and “to furnish (a place) with inhabitants or settlers.”

Thus, I propose that a “space settlement” is a group of people (men, women, children) who move to some specific location in space (Moon, Mars, an asteroid, orbital free space, etc.) to take up permanent residence there. This implies that they will raise their children in this “space settlement,” work in or near the “space settlement,” and in all probability die and have their remains disposed of there as well.

Just as towns are started, grow, and then sometimes decline on the Earth, not all space settlements will necessarily last a very long period of time. The requirement is that they are intended to be permanent, not that they actually will be. The ancient town of Petra in Jordan was a settlement that declined over a long period of time and finally became empty as it lost out economically due to changing trading routes.

It is immediately clear that an oil drilling platform, an army base, or an Antarctic science station, although they may function for many years or even decades, are not settlements. Families don’t live there, children are not born there, and no one is buried there. It follows that similar facilities in space are also not settlements. Thus, even if we maintain the ISS forever, it is not a settlement—it is a scientific outpost or base. ISS-like bases on the Moon or Mars are equally not settlements, even if they are more self-sustaining than the ISS. In fact, to be at all affordable, a scientific base on the Moon or Mars would need to be much more independent of Earth than the ISS.

The question arises—suppose there is a long established base, and people start raising their families there. Is this then a settlement? As it turns out, there is an Argentine base in Antarctica where families live year around, Esperanza, mainly supporting what amounts to the tourist trade. Since it has been in operation for some time, it could be argued that Esperanza Base is economically self-sustaining. Could a similar base on the Moon, permanently occupied by families that support both scientific and adventure tourists be considered a settlement? Perhaps it could, but is this the sort of “settlement” that space advocates have in mind establishing?

I suggest that Esperanza Base, although arguably a settlement, is not what most space advocates have in mind when they argue for “space settlement.” I believe that they implicitly have some additional characteristics that they want to see in “space settlements”:  The settlements should be part of an economic web that is, at least theoretically, on a path toward being independent of the Earth. In practice, this suggests that the settlements should be economically robust enough that in the event that as the result of some natural catastrophe, war, or other upheaval, Earth lost all interest in space settlements, those settlements could continue on after a period of adjustment, and would grow in space in a sustainable fashion.

Esperanza Base in Antarctica does not come close to meeting this requirement. If the base was not supported by large imports of supplies and a steady supply of tourists, it could not survive.

In order to meet the above requirement, a space settlement would need to:

Sometime people suggest that there is a magic number that makes a base a settlement.  This is clearly not the case.  Once can imagine a very large base—with thousands of soldiers for example—that is far from being a settlement.  It is also important to keep in mind that with 3D-printing, robotics, and artificial intelligence, the number of people needed for a settlement to be economically self-sustaining may be much lower than would be the case on Earth with current technology.

For long term expansion, genetic variety is required, which it is often suggested requires something like 600 people at a minimum, with several thousand being much more robust. However, with the kind of genetic technology likely to available 50 years from now, this number might be much reduced.

Returning from the more distant future to the present day, perhaps the most critical issue is why anyone would bother to create a space settlement. This is the vital issue. Some envision a Star-Trek like future where a large fraction of the Earth’s wealth goes toward maintaining a network of off-world settlements, all government funded. Although theoretically possible, it is virtually impossible to imagine what would motivate this scenario.

Classically, O’Neill envisioned thousands of space-suited settlers building Solar Power Satellites. This would be an example of the first case. It is perhaps more likely that the settlements will be maintained as a spin-off of wealth generating activities in space that are mainly robotic in operation. However, there must be some kind of large economic activity in space for space settlements to exist.

This is not to suggest that space settlements will be commercially owned “company towns.” Our experience with such things on Earth suggests that they are not pleasant to live in or capable of long-term growth.

A brief perusal of the NSS, Space Studies Institute, and Space Frontier foundation websites does not reveal a short definition of “space settlements” along the lines I have been discussing. A recent letter to Space News by Al Globus avers that “By settlement we mean places for people to live out their lives and raise children.” This is consistent with the discussion above, but certainly not complete. The Globus letter exists in the context of explaining the Alliance for Space Development focus on “development and settlement of space,” and further states that “By development we mean commercial, private, eventually self-sustaining industrialization of space.”  Later Globus states that space settlement “… requires a strong, self-sustaining industrial infrastructure that is not dependent on the political winds of the moment….”

There are a number of key ideas here:

The Globus letter refers to “private” commercial activity, which might exclude kibbutz-style settlements where property is owned and operated in common. Although there is good reason based on long experience on Earth to think that such settlements will not be the dominant organizational form of a large-scale space-based civilization, there is no reason to exclude such forms.  It is also possible that the kibbutz may prove better adapted to space conditions than Earth conditions.

To summarize, the space settlements we are working to establish have the following characteristics:

In conclusion, here is a short definition of space settlement using these ideas: