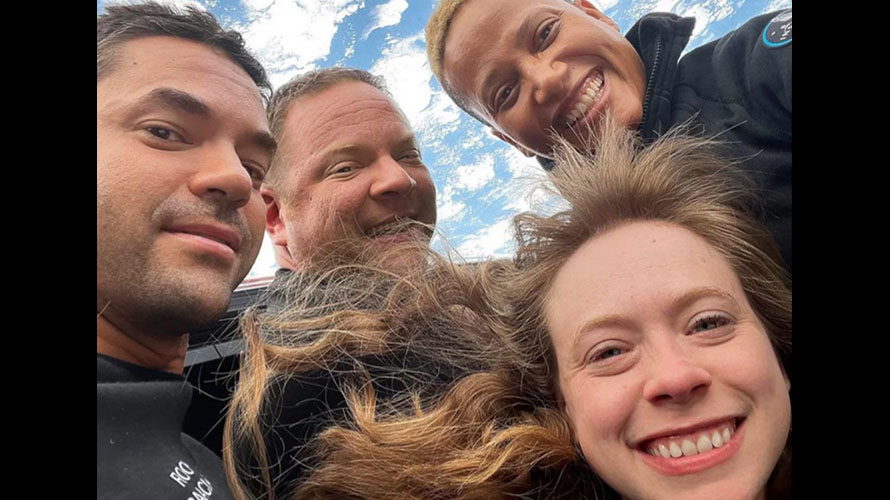 I can’t believe I am finally writing this, but 2021 was the year that space tourism “rebooted” big time. The first epoch of space tourism started on April 28, 2001, with the 8-day flight of American Dennis Tito to the ISS on a Russian Soyuz. This epoch ended with the September 30th, 2009 12-day flight of Canadian Guy Lalberte to the ISS, again on a Russian Soyuz. All of these flights were organized by Space Adventures. The second epoch of space tourism roared to life in 2021. I am going to cover the flights in descending order of “coolness” and achievement, at least to my view!

You can’t say that Inspiration4 was the first “orbital” tourist flight—see above—but it was the first orbital flight of the 2nd epoch of space tourism. With a crew of Americans that included Jared Isaacman, Sian Proctor, Hayley Arceneaux, and Christopher Sembroski, this flight featured:

The Russians returned to the space tourist business, again working with Space Adventures, to fly Japanese fashion billionaire Yusaku Maezawa and his production assistant Yozo Hirano to the ISS for 12 days on a Soyuz capsule starting on December 8th. You may have head of Yusaku before—he is planning on flying a SpaceX Starship around the Moon—but it appears he wanted to get some spaceflight experience in first.

The Blue Origin New Shepard made three sub-orbital but over the Karman line tourist flights in 2021:

In addition to the three passenger flying launches just listed, Blue flew the New Shepard 4 twice to certify it to carry crew, and launched the New Shepard 3 for the 8th time on August 25 with 18 commercial payloads and a NASA lunar landing technology demonstration installed on the outside of the capsule. This bought Blue Origin to a record six New Shepard flights in one year, beating the previous record of four set in 2016.

Blue Origin gets high marks for creating a reliable hydro-lox sub-orbital rocket that spews clean water as exhaust, putting to rest fears that space tourism will pollute the Earth and exacerbate climate change. A tip of the hat to Jeff Bezos for “eating his own dogfood” and going on the first flight.

Reaching an altitude of 86km, SpaceShipTwo fell a bit short of the 100km Karmen line, but Richard Branson won bragging rights over Bezos by flying his own sub-orbital tourist rocket July 11, 2021, beating Bezos to the punch by a few days, along with pilots Mackay and Masucci and passengers Sirisha Bandia, Colin Bennett, and Beth Moses.

Unfortunately for Branson, the flight veered a bit off course, leading to some after-flight drama about whether FAA protocols were violated. Also, instead of moving briskly on to regular commercial flights, the SpaceShipTwo and the carrier aircraft were wheeled back to the factory for repair work, not to fly again in 2021.  And by comparison to the clean-burning New Shepard, the hybrid engine of Space Ship Two is less than stellar.

2021 was a really big year for space tourism, although clearly just the start of a new age for both orbital and sub-orbital tourism. Big questions remain:

The above questions are giving a lot of people sweaty palms right now, but take a moment to bask in the signal achievements of space tourism in 2021. Derided by the ill-informed as “joy rides for the rich,” space tourism holds out the promise of good paying jobs on Earth and profits that over time lead to both lower costs to orbit and infrastructure in space to support tourism, helping to enable the exploration, development, and settlement of space. So, three cheers for space tourism in 2021, and fingers crossed for a great 2022!!!