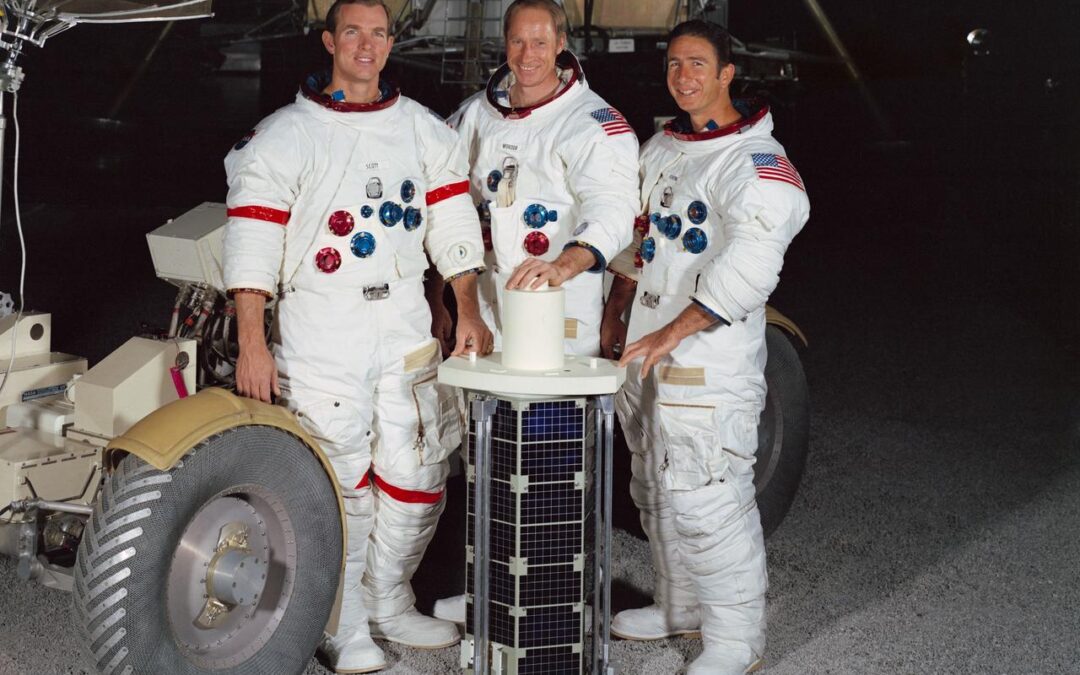 This week marks 50 years since Apollo 15, Apollo’s first “J” mission dedicated to lunar science, and the first to boast the Lunar Roving Vehicle (LRV), a technical marvel that went from blueprint to reality in an astounding 18 months. The mission was a whole catalog of firsts, from the stand up EVA performed by commander Dave Scott, to the aforementioned LRV, to the first subsatellite deployed by a human around the Moon, through the deep space EVA performed by command module pilot Al Worden – which still holds the world record for “deepest” deep spacewalk. The achievements made by each crew member during Apollo 15 would’ve been almost unbelievable less than two years before in 1969, when NASA was working on first settling crews down upon the lunar surface and bringing them back home, alive. Now, the Moon was ripe for actual exploration.

Apollo 15 remains well-documented, from entries on the Apollo Lunar Surface Journal website to its astronaut’s autobiographies, which include Al Worden’s 2011 Falling to Earth written with Francis French, and 2004’s Two Sides of the Moon: Our Story of the Cold War Space Race by Dave Scott, written with Apollo-Soyuz Test Program Russian commander and first spacewalker Alexei Leonov. But three books, published during the 1970s, provide more unique insight into the iconic 1971 mission.

The marvelously titled To Rule The Night, lunar module pilot Jim Irwin’s memoirs, were published in 1973 by the A.J. Holman Company. This book is Irwin’s story of his progression from Naval Academy student to eighth human on the Moon, with a lot of his newfound spirituality thrown in along the way. Following Apollo 15, Irwin dedicated much of his time and life to his ministry, called High Flight. This book functions as a timeline from his (sometimes harrowing) starts and fits as a pilot to his life in 1973, which unfortunately had already been punctuated by his first heart attack. Sadly, this foreshadows his struggle with heart ailments throughout the rest of his short life (Irwin died in 1991 at age 61), and disturbingly echoes the reality that his health challenges were likely exacerbated by strenuous physical activity during his Apollo 15 lunar EVAs. 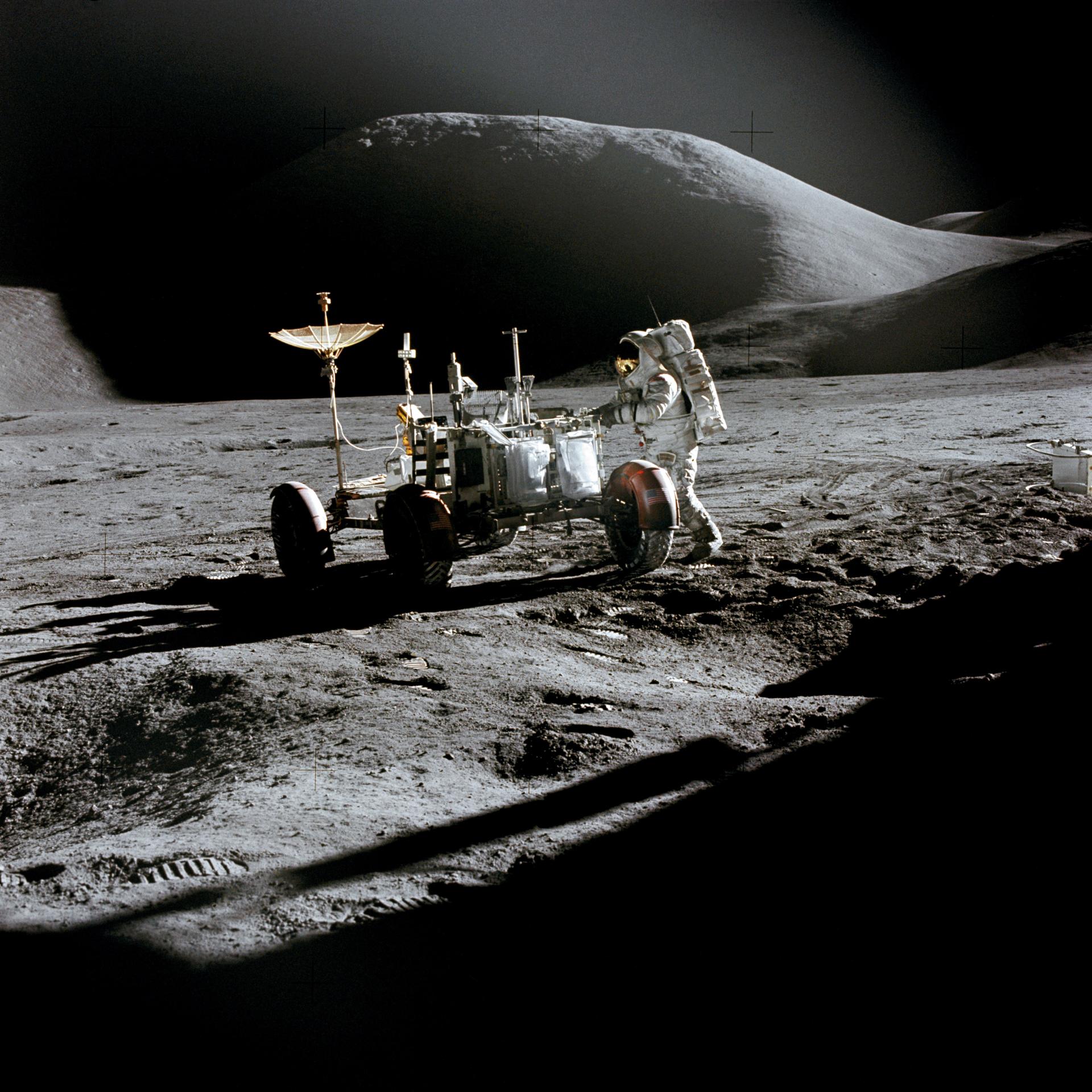 “AS15-86-11603 (31 July 1971) — Astronaut James B. Irwin, lunar module pilot, works at the Lunar Roving Vehicle during the first Apollo 15 lunar surface extravehicular activity (EVA) at the Hadley-Apennine landing site. The shadow of the Lunar Module ‘Falcon’ is in the foreground. This view is looking northeast, with Mount Hadley in the background. This photograph was taken by astronaut David R. Scott, commander.” NASA photo

Sometimes, To Rule The Night shows Irwin as a “man of his time.” The Irwin who is writing the book, circa 1972-73, doesn’t like that his wife Mary didn’t seem as dedicated to church as he was; nobody would accuse him of being “progressive.” However, this book is notable in that it shows that Irwin – who became an astronaut a few short years after a potentially career-ending, gruesome leg injury, acquired in a plane crash – didn’t arrive at NASA, in his words, “unblemished.” In his words in To Rule The Night’s prologue: “I had made many mistakes, goofed up many times, had my ups and downs, physically and spiritually. Then, on my third try, just as I reached the age limit, I was accepted into the astronaut program. This was the most elite group in the service, and a great honor, but even then I had no idea that I would ever be chosen to actually go to the Moon. When I was selected as an astronaut, it was something of a miracle that I was still in the Air Force.”

While To Rule The Night hasn’t aged well – mainly owing to Irwin’s sometimes “of the era” opinions – it still deserves a read, if only to illuminate the odds Apollo 15’s second moonwalker was up against early in his life, and the fight he would be up against later. While this book is long out of print, copies can still be found on rare book websites.

Al Worden’s Hello Earth: Greetings from Endeavour and I Want to Know About a Flight to the Moon, both 1974

When mod-dressing Apollo 15 command module pilot Al Worden arrived home to his space-age bachelor pad with shag carpeting (covering even the staircase!) following his mission in August 1971, life seemed like one big non-stop party – in fact, there were people at his house celebrating for what seemed like weeks. It was hardly a time for introspection. Eventually, when the glasses were cleared from the sink and everyone was gone, he started gathering his thoughts and began attempting to get some words down about what he saw and felt during his six days around the Moon, three of these days being completely alone. The pen touched the paper: In the distance, barely seen / The thin horizon knifes between / The ocean and the sky. / I know that I could reach it / If I had wings to fly.

This is how Hello Earth: Greetings from Endeavour, the only book of poetry written by an Apollo astronaut, was born.

By 1974, Worden had begun reading selections of his poetry at public events, and had published Hello Earth via Nash Publishing in Los Angeles. In his later years, he had taken to revisiting the book and reading poems from Hello Earth at speaking engagements; a favorite was Oceans, partially reprinted in the above paragraph. Whether you appreciate poetry or not, these poems give remarkable insight into Worden’s singular experiences, which included the deep space EVA that treated him to almost painterly, surrealistic visions of both the Moon and Earth (and Jim Irwin) in his field of vision. In addition, there is a wonderful poem about Dee O’Hara, close Worden friend and famed astronaut nurse, which is worth the price of the book alone. 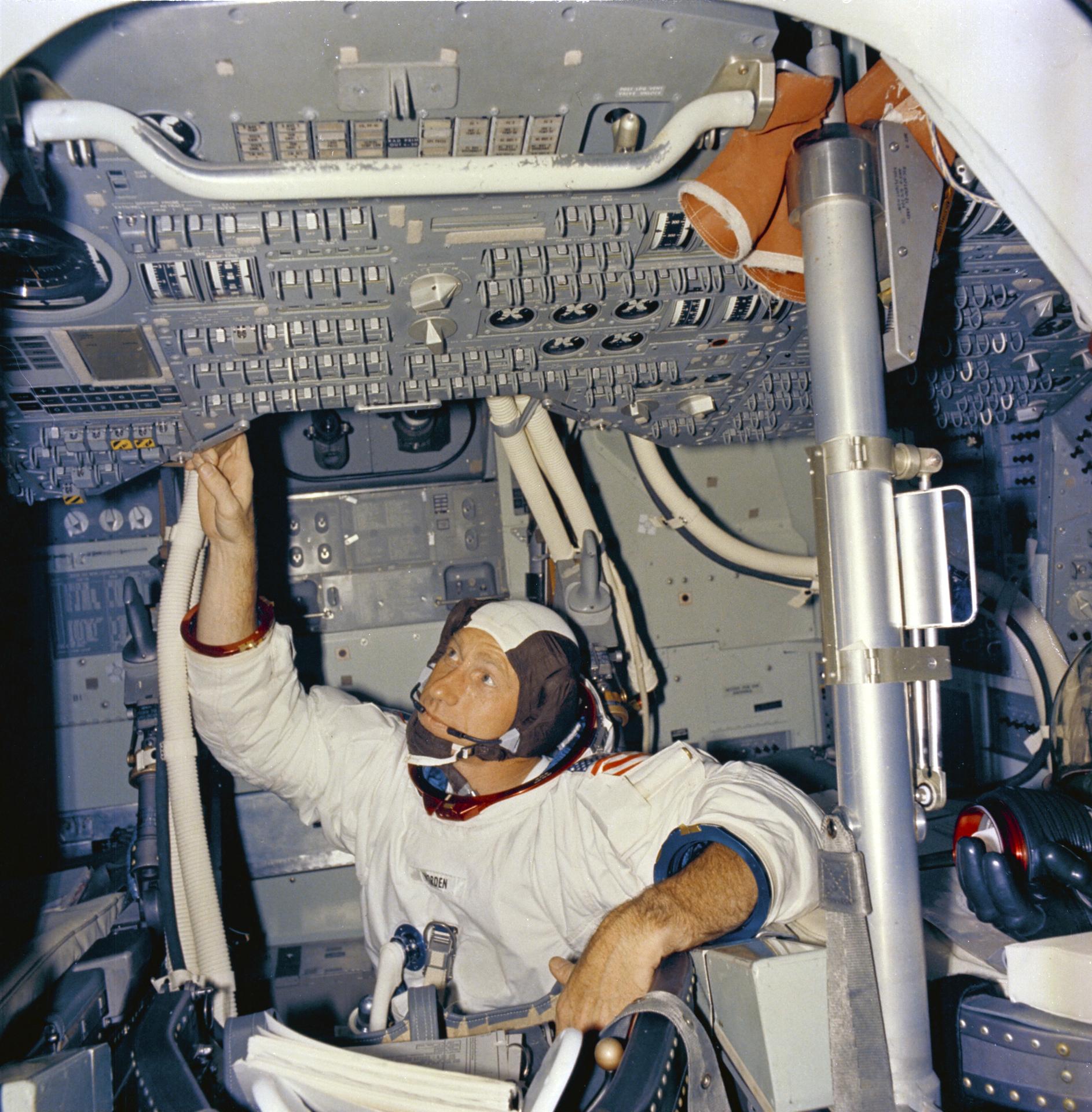 “Apollo 15 Command Module Pilot Alfred M. Worden practices alone in a mission simulator at the Kennedy Space Center in preparation for his upcoming launch to the Moon with Mission Commander David R. Scott and Lunar Module Pilot James B. Irwin. Worden will maintain the command module in lunar orbit while the other two crewmen remain on the surface for as long as 67 hours. Launch to the moon is scheduled for no earlier than July 26, 1971.” NASA photo

Worden’s second 1974 book, I Want to Know About a Flight to the Moon, is more sentimentally held among his fans – particularly those who were young children circa the early 1970s – because it is directly linked to his appearances on Mister Rogers’ Neighborhood, the children’s show hosted by Fred Rogers, whose friendly visage and tennis shoes grew to be iconic symbols of children’s television. Here, Worden discussed what it was like to be a working father, when the working father happened to have an office space orbiting the Moon.

While mainly for kids, it is a kick to read about Worden’s background, family, astronaut training, and lunar mission; until Falling to Earth, which was released nearly 40 years later, this book really functioned as Worden’s only official “memoirs” of his time orbiting the Moon. (Of course, Falling to Earth was more than worth the time to wait.) Both Hello Earth and I Want to Know About a Flight to the Moon are also out of print, but can be found via rare book websites. You may find copies in the “wild” via Amazon.com.

I choose to believe Worden probably felt the following way through his entire life – from page 59 of I Want to Know About a Flight to the Moon:

One last thing. If I had the chance, I would go back. There is a lot of work that has to be done up there. And a lot of things that we have to find out about the Moon. Sure, I’d like to go back, especially now that I have had all that training. But let me tell you this. It’s nice to be here. The time that I felt the most strange was on the morning after I had spent my first night in my own home. I walked out of the house to get the newspaper and the first thing that I saw was the Moon in the sky. What a shock! It’s a nice place to visit, but I wouldn’t want to live there.

Featured photo credit: “S71-22401 (March 1971) — These three astronauts have been named by the National Aeronautics and Space Administration (NASA) as the prime crew members of the Apollo 15 lunar landing mission. They are, left to right, David R. Scott, commander; Alfred M. Worden, command module pilot; and James B. Irwin, lunar module pilot. The crew is posed behind the subsatellite that they will deploy from the lunar surface during the Apollo 15 mission. Astronauts Scott and Irwin will descend in the Lunar Module (LM) to explore the moon, while astronaut Worden will remain with the Command and Service Modules (CSM) in lunar orbit.” NASA photo