Space in the Seventies: Skylab’s Final Moments, Part One 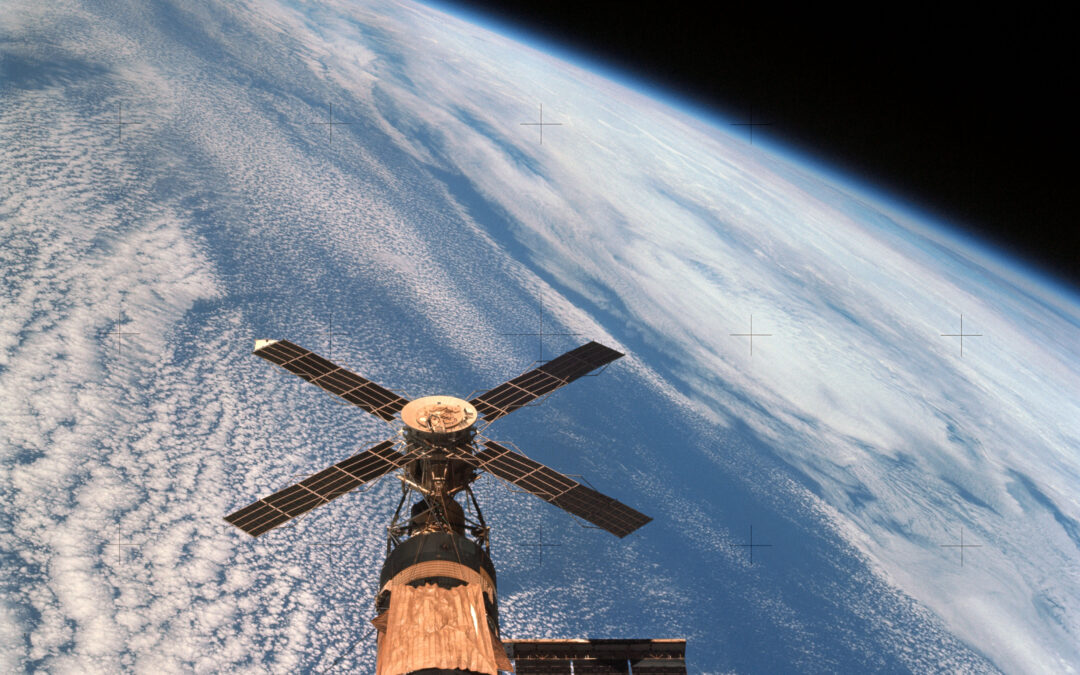 By early 1978, it was clear that Skylab was coming down more quickly than predicted, and ground controllers worked hard to reestablish commands with the long-uncrewed space station. But from its troubled launch to its fiery ending, Skylab had its own plans. This is part one of the story of how Skylab returned to Earth – with much international media fanfare – in mid-1979.

A previous This Space Available blog post underscored how ground controllers sought to reawaken Skylab’s long-dormant Apollo Telescope Mount Digital Computer (ATMDC) and devised two new modes of station orientation control: end-on-velocity-vector (EOVV) and torque attitude control (TEA). EOVV was used, according to a 1978 New Scientist article, with Skylab’s “docking port forward and its long axis parallel to the ground.” EOVV was devised to minimize drag upon Skylab; the space station’s usual operating mode, solar inertial (SI), caused high drag. TEA would be used during reentry to balance torque along the space station, allowing for as much of a controlled descent as possible. This mode was devised if reentry was unavoidable, but first, NASA had an ambitious plan to restore Skylab to a useful orbit.

According to a comment left by NASA’s John R. Glaese on a 2019 This Space Available blog post, “I was on the team at [NASA’s Marshall Space Flight Center] that designed and developed both EOVV and TEA control algorithms and shepherded both schemes as well as working with experts from IBM who reprogrammed the ATMDC for these tasks. IBM did not invent the algorithms, my colleague and I did. Also, we simulated them to verify they would work as you noted some form of TEA control is being used.” 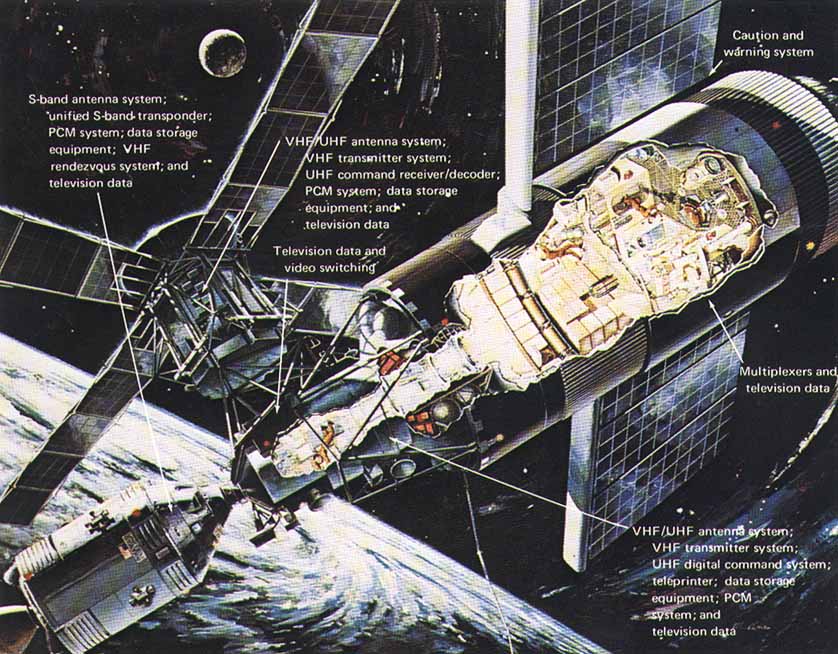 During this same period, NASA was busy building its first Space Shuttle, Columbia, with the hope it would launch by 1979. Astronauts Fred Haise and Jack Lousma were already preparing to fly Columbia’s second mission that would see Lousma maneuver and attach a Teleoperator Retrieval System (TRS) – which resembled an Inertial Upper Stage – to Skylab. More about this proposed mission is discussed in Fred Haise’s autobiography written with Bill Moore, the wonderfully titled Never Panic Early, which will be released Tuesday, April 5. 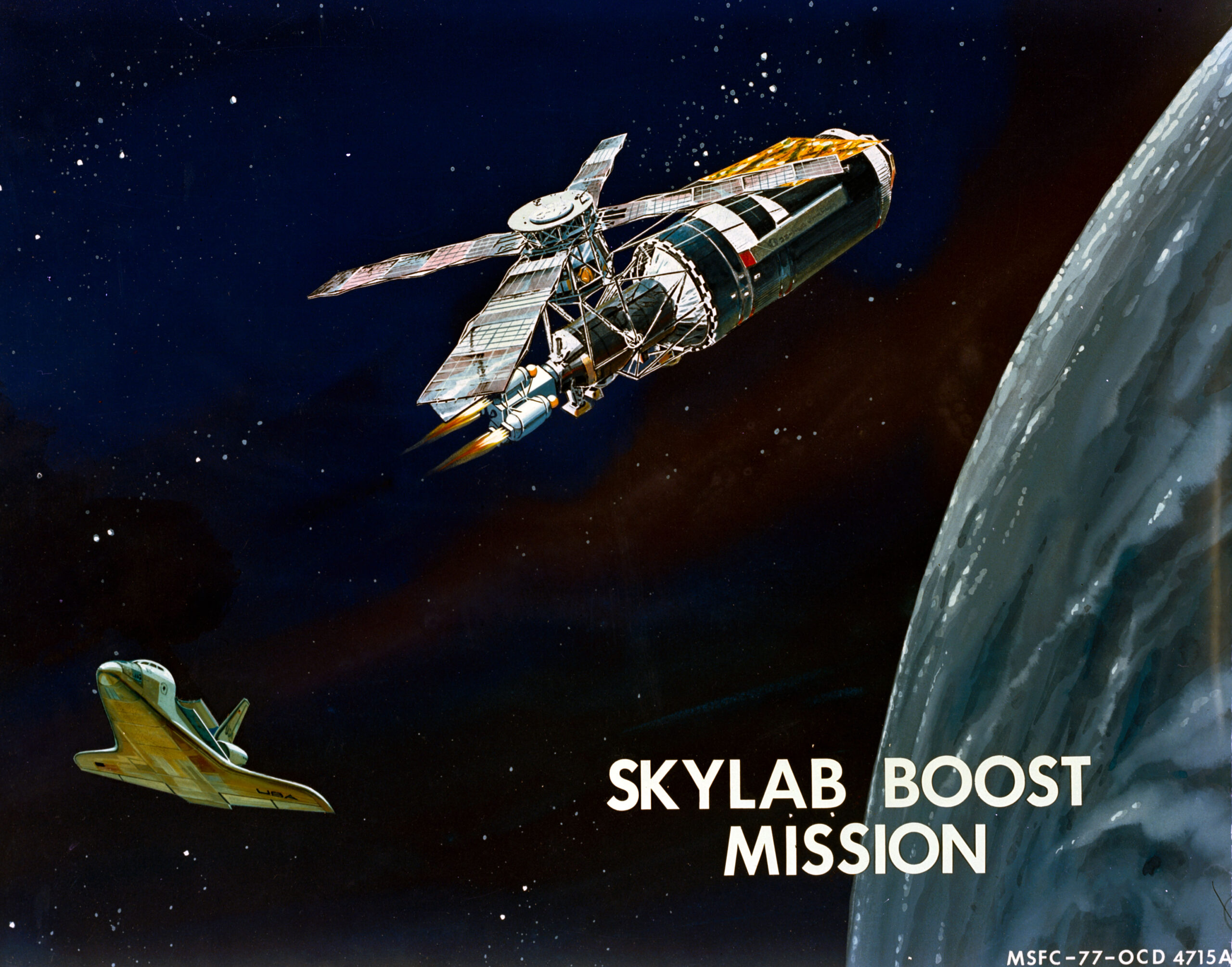 “S78-23630 (1978) — A drawing of a Teleoperator Retrieval System (TRS) which is being developed by NASA for use beginning in late 1979. This spacecraft is illustrated being used to re-boost the Skylab space station to a higher orbit. Photo credit: NASA”

Again, from the New Scientist article: “The TRS rocket engine is to have the capability of boosting Skylab 75 nautical miles…a boost mission is practical as long as Skylab maintains an altitude of 150 miles or better. The TRS could restore it to a 225 nautical mile altitude where it could be refurbished and reused as a Shuttle station.” The article prophetically added, “It would be scientifically interesting to observe the gravitational and atmospheric forces affecting a vehicle as big as Skylab in an uncontrolled descent, Dr. [Herman] Thomason [director of systems analysis at Huntsville, Alabama’s Marshall Space Flight Center] reflected. ‘We would like to know what it would do,’ he said, ‘but we don’t want Skylab to tell us.’”

If this blog post was a documentary, here’s the part where a voiceover would intone, “Skylab indeed would tell them.” Dr. Thomason’s remarks turned out to be the Skylab program’s version of “famous last words.” Columbia would not be ready for her maiden voyage for nearly three more years, thanks to numerous issues with the orbiter’s main engines and thermal protection system; Haise and Lousma would soon be out of a mission. And the Sun, ironically the very thing Skylab dedicated much of its time studying, would do its best to bring America’s first space station down to Earth sooner than anticipated.

The first Tracking and Data Relay Satellite (TDRS) wouldn’t be deployed until early 1983, during Space Shuttle Challenger’s first mission, STS-6. In 1978, NASA still kept tabs on Skylab through ground stations sprinkled strategically around the world. The New Scientist article discussed a power problem Skylab ran into largely because it was “outside the radio range of the Bermuda, Madrid, and Goldstone ground stations.” Even when the space station passed over all three ground stations, there were times when it was out of communication for seven hours. The solution was to put an additional ground station in Santiago, Chile in service as a measure to fill the communications gap.

Even in its final moments, Skylab was still enshrouded in myth and legend. One was that the reentry was uncontrolled; as mentioned before, a new orientation mode had been devised to bring the large mass down in as controlled of a manner as possible. The second myth was that the final ground station in contact with Skylab was the one in Santiago. According to Dan Kovalchik, who worked as a controller at the Ascension Island ground station, that myth owed to “a flight controller at JSC [sounding] her air horn announcing the ‘final’ Skylab loss of signal” prematurely.

Nearly 43 years later, it was revealed by GNS flight controller Cindy Hudgins Brizzolara that the air horn actually signified something else: “Working as a GNS flight controller on Skylab Boost with no TDRSS coverage was a wonderful experience for a NASA new hire — building commands with a hexadecimal calculator and working with the SCE operators around the world to load the commands prior to acquisition of signal with Skylab. I am the flight controller who blew the party horn — long story. But the horn did not signify loss of signal — rather the fact that I turned off the CMGs [control moment gyros].” She added, “Turning the CMGs off was heartbreaking after spending a year keeping them operational!”

Fast forward to July 11, 1979. Kovalchik worked tracking Skylab’s final orbits at the Ascension Island station alongside a trainee named Gene. Here is a passage from his book, The Devil’s Ashpit and Other Tales of Ascension Island:

Even if we had remained oblivious to the media coverage, I still would have felt myself lucky to be working during the predicted reentry orbit. I’d tracked a few brand-new satellites in my short career (Skylab being the first) and I was on the Vanguard [tracking ship] for the manned Apollo-Soyuz capsule reentries, but I’d never tracked a satellite to its absolute end.

I got my chance on July 11, 1979. I badly wanted to take charge of the SCE during Skylab’s final orbit, but I couldn’t bring myself to push my pupil aside. So just like I had done all week, I stood beside Gene while he prepped the computer, tested its link to S-band, and (correctly) announced, “OPS, SCE. We’re go for commanding.”

And I was standing beside him at 16:01:31 when he sent the very last command that Skylab would ever receive. The command turned on the doomed spacecraft’s Attitude and Pointing Control System so that the on-board computer would transmit rate-of-tumble information, helpful in predicting where on earth the mission would come to an end.

Kovalchik’s account also emphasized the fact that even as the spacecraft was breaking up in Earth’s atmosphere, Skylab’s computerized systems were still robust enough to accept and carry out commands. No wonder a next-generation version of Skylab’s computers would be utilized for the Space Shuttle.

While NORAD calculated Skylab’s impact time as 12:37 p.m. EDT, this time would later be disputed by residents in parts of Western Australia. Don’t miss the next installment of Space in the Seventies, which will discuss why Skylab’s plans were quite different from what anyone anticipated.

Featured photo credit: “An overhead view of the Skylab Orbital Workshop in Earth orbit as photographed from the Skylab 4 Command and Service Modules (CSM) during the final fly-around by the CSM before returning home. The space station is contrasted against the pale blue Earth.” February 8, 1974 NASA photo.