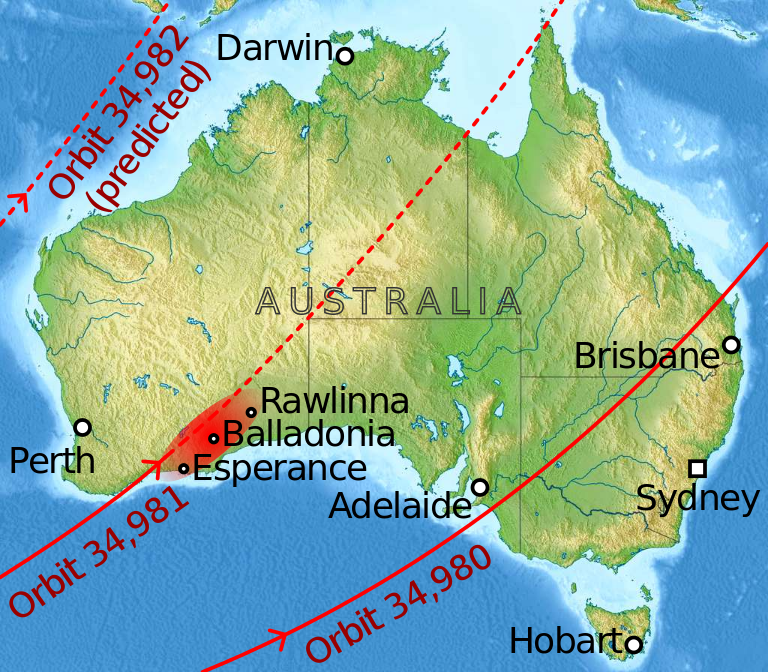 While the last part of this blog series discussed how Skylab entered its final moments, this article discusses what would become Skylab’s unexpected graveyard – and the diverse, sometimes comical reactions the reentry elicited. While NORAD calculated Skylab’s impact time as 12:37 PM EDT on July 11, 1979, this time was disputed by several residents in parts of Western Australia. A magnificent radio and film companion to the Skylab reentry saga compiled by ABC News Australia serves as the swansong of the program, highlighting how fiery chunks of the space station rained down as most of the Western part of the continent slept. Here is how Australia responded to Skylab’s reentry and its aftermath.

Before July 1979, the only big claim to fame Skylab had enjoyed in tandem with Australia was the fact that at one time, an Australian-American NASA astronaut had hoped to get his ride to space on its (canceled) successor, Skylab B. But that all changed during the early morning hours of July 12, 1979. 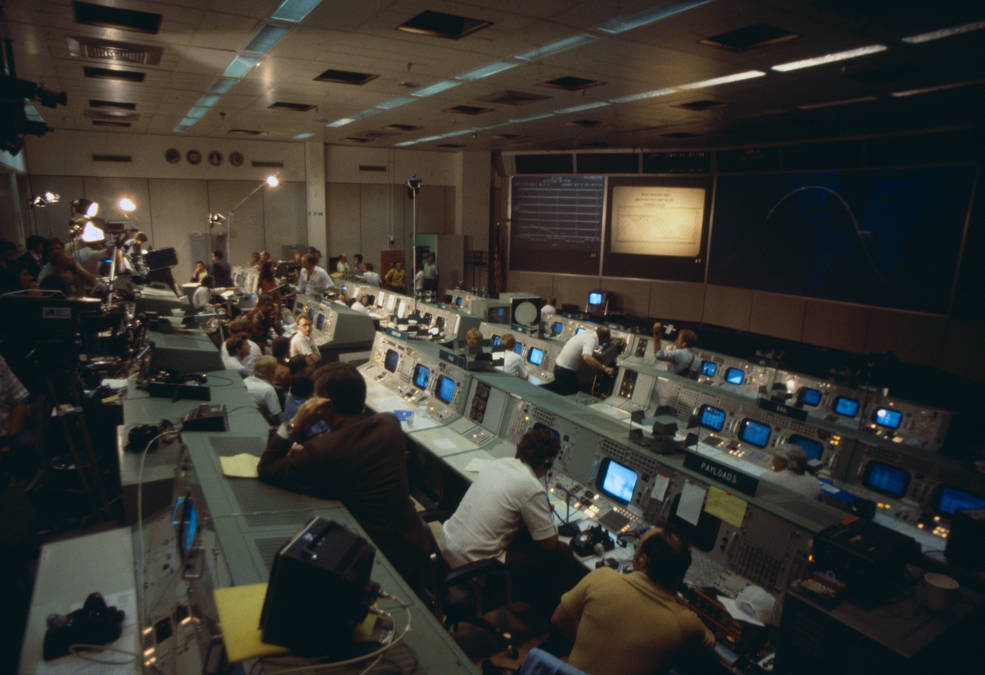 Shortly after 2 AM AEST (Australian Eastern Time), ABC News Radio correspondent Steve Cosser was inundated with phone calls from residents on the other side of the continent, where it was just after midnight. A woman calling from Perth reported what she witnessed: “Low in the southern sky, I saw five large glowing white objects spread over a fair distance, horizontal in the sky…I saw it somewhere between 12:30 and 12:35 [AM] Western Australian time.” She stated that the objects were in the sky for “roughly about two minutes,” and she added, “As I watched them, after about a minute, the five large chunks broke up and spread out into the sky into a large number of very small pieces.” 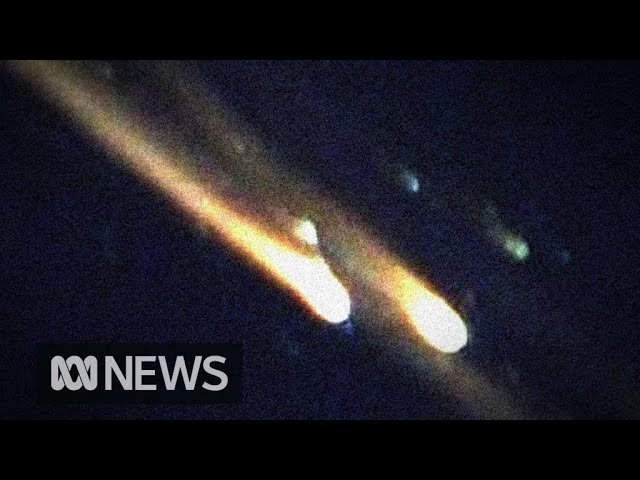 Cosser then broke off, as he was receiving numerous calls from Western Australia. The following caller raved, “After about just after 12:30…[It was] very well lit, seemed to be colored in parts, long streaks of light with shooting stars in front of it…It passed right over our house. In fact, it seemed to be not very far above the trees.” This caller claimed it was in the sky for around one minute: “And then after it had passed over, we had the sonic boom, like thunder.” The caller added she and her family had stayed up late, specifically to see Skylab. She confirmed with delight, “Yes, we did! Oh, [we were] most excited! Too excited to be frightened, absolutely fascinated by the sight of it, it was a wonderful sight.”

A male caller from Salmon Gums, roughly an hour north of Esperance, related, “I was listening to the radio, and I thought, I’ll just wander outside; it would be a million-to-one chance that I’d see anything. But I was terribly excited to see these bright lights, various colors…there were little flashes of orange and green and red among them. They were traveling in a northeasterly direction on a downward slope. I don’t think that there’s any doubt about the fact that if some of those pieces survived, they must’ve hit the continent of Australia. I rushed inside to ring up [and call ABC NewsRadio]. I was most frustrated; I couldn’t get anybody, and you people were crossing to America, and they were saying ‘it’s going here and it’s going there,’ and I’d just seen the damn thing falling, you know.”

Indeed, limited film and photographic evidence of the reentry confirmed that the sight the callers saw early that morning was what remained of Skylab. The space station that had unceremoniously arrived in low Earth orbit missing a micrometeoroid shield and a solar panel in May 1973 ironically was too robust to break up entirely over the Indian Ocean.

According to the July 21, 1979 issue of The New York Times, the first person to offer The San Francisco Examiner an authenticated piece of Skylab received a cool $10,000 (roughly $40,000 today) for his services. “Stan Thornton, a 17‐year‐old trucker’s helper, was named the winner of the newspaper’s contest after a federal laboratory authenticated a handful of charred nuggets that he found in his backyard in Esperance, a small town in southwestern Australia. He was the only person to claim the money,” the Times article read.

In perhaps one of the most 1970s moments of the decade, Skylab’s dramatic demise was also somehow integrated into a beauty contest. On July 20, the Miss Universe pageant took place at Perth Entertainment Centre; in a surreal twist, the auditorium boasted not only 1970s television stalwart and musical performer Donny Osmond but also a large piece of Skylab debris. In an even more surreal twist, part of the stage collapsed that evening, causing some contestants injuries. On a happier note, Miss Venezuela won; she took home a mink coat, a car, and $10,000 in prize money (but no pieces of Skylab, to my knowledge).

Skylab’s reentry also jump-started – however briefly – a conspiracy theory. ABC News Australia interviewed John Somerville-Smith of The Toorak Times, who claimed he alone was aware of a secret NASA plan to trash the space station over Australia, unbeknownst to its citizens. Somerville-Smith’s “testimony” begins at the 33-minute point in this clip, where he claims he knew Skylab would be deorbited over parts of the continent “Friday…a week before” based on a tip from an unnamed NASA source. There was and is no evidence that I can find that validates Somerville-Smith’s claim that NASA deliberately and purposefully brought Skylab down upon Australia for the space agency’s amusement.

It bears mentioning that Somerville-Smith had cultivated quite the reputation as a fabulist, having been the focus of several libel lawsuits and even two stints in jail for fraud. When Somerville-Smith died in 1985, the Melbourne, Victoria newspaper The Age published a piece that served as a part obituary and part indictment. The delightfully petty column began, “Never spoil a good story for the want of proof. This would be a good epitaph for John Somerville-Smith, the notorious gossip columnist who died on Thursday night at the age of 66.” A February 17, 1985 column by Derryn Hinch in The Sydney Morning Herald doesn’t even bother with the niceties of an obituary and cuts right to the chase:

We are told that we must respect the dead. We are told that if you can’t say something good about somebody after they die then don’t say anything at all. I do not believe that. I believe that all history owes the dead is the truth. When I go that is all I ask of anybody…In his final years, he was a disgrace to his profession…the way that The Toorak Times is a blot on any argument for the freedom of the press. To borrow from Pete Hamill: John Somerville-Smith is dead and the world is better for his passing.

All conspiracy theories, embellishments, and snarky obituaries aside, Skylab’s fate left resonances in Esperance. Its museum even has a Skylab model in front of its entrance, leaving visitors no doubt where the space station experienced its final moments in the spotlight.

Featured Image Credit: “Ground track of Skylab of its final orbits and the debris footprint in southwest Australia.” NASA image.