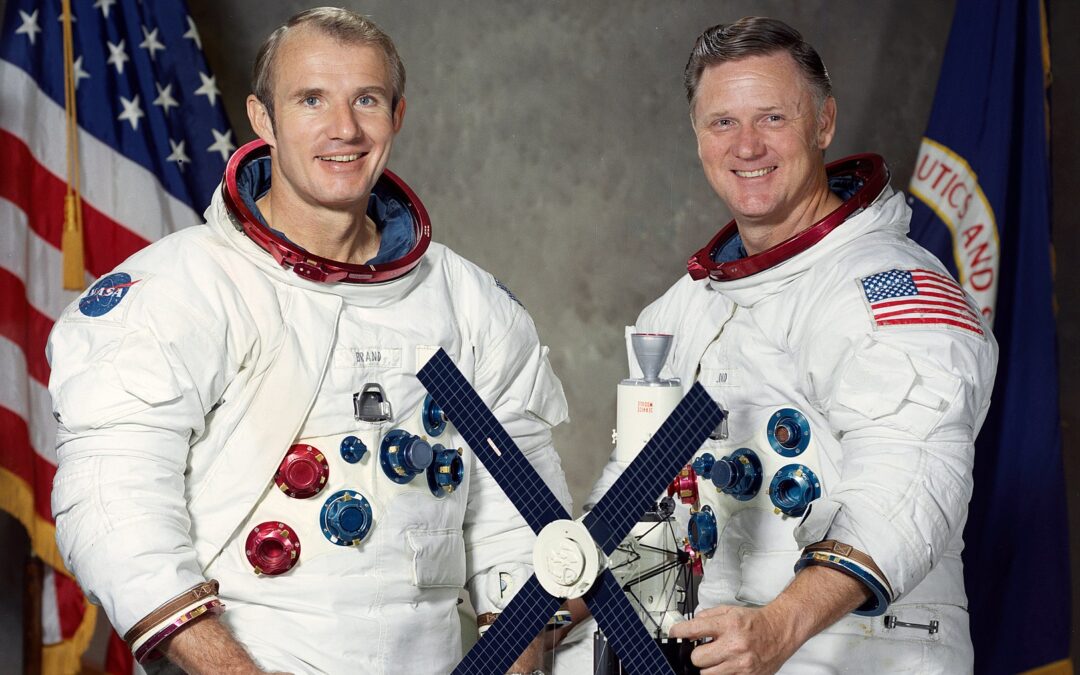 The 1970s didn’t start out on a promising note for astronaut Vance Brand. As a member of Apollo 13’s support crew, he was the one who had to call fellow support crew member and CAPCOM Dr. Joe Kerwin with the news that a situation had unfolded during the mission that was “like a nightmare sim” (his words, captured for posterity on the Apollo 13 in Real Time website). 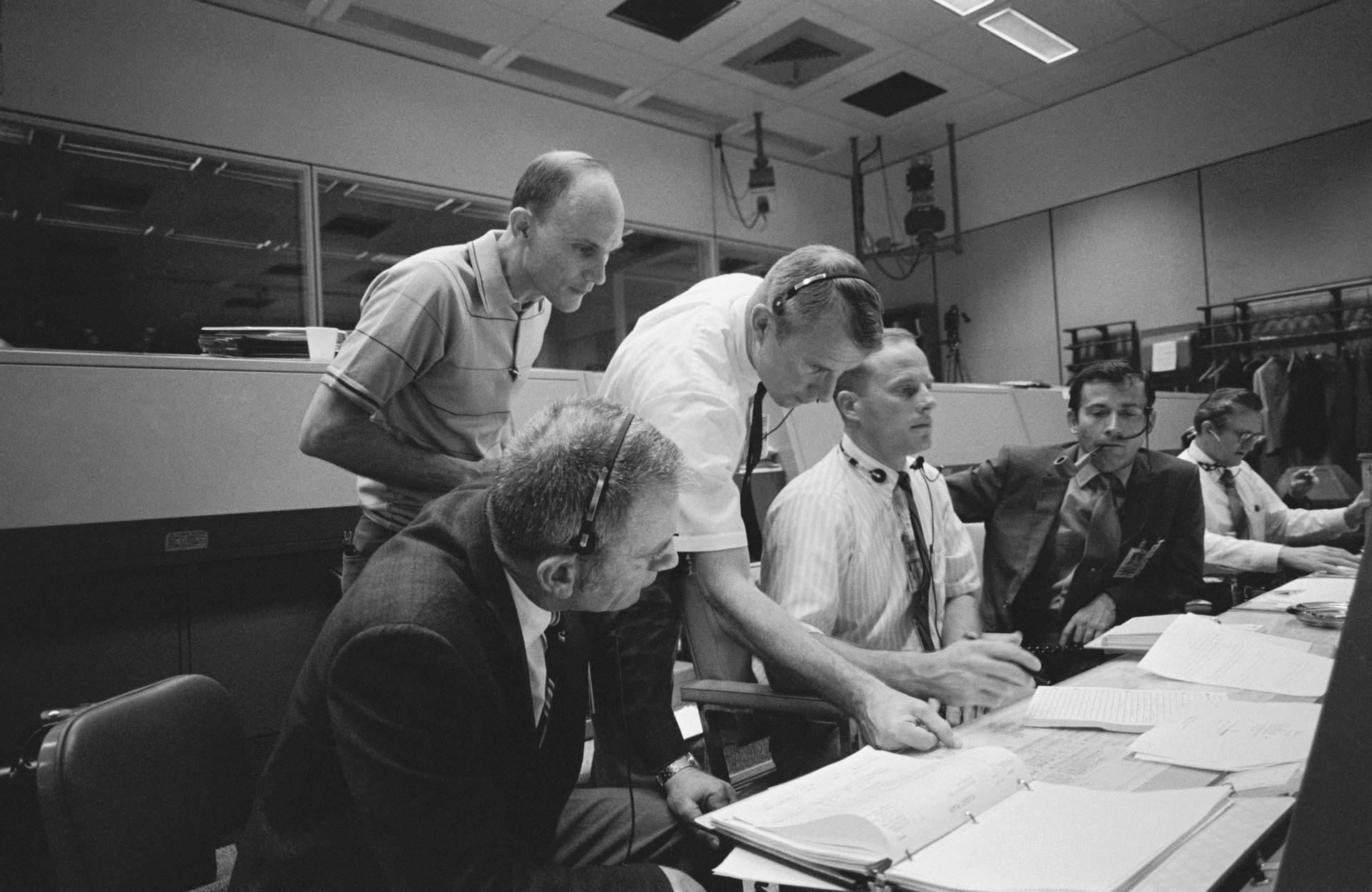 NASA photo, April 14, 1970. “Seated at consoles, from left to right, are astronauts Donald K. Slayton, director of flight crew operations; astronaut Jack R. Lousma, Shift 3 spacecraft communicator; and astronaut John W. Young, commander of the Apollo 13 backup crew. Standing, left to right, are astronaut Tom K. Mattingly II, who was replaced as Apollo 13 command module pilot after it was learned he may come down with measles, and astronaut Vance D. Brand, Shift 2 spacecraft communicator. Several hours earlier, in the late evening hours of April 13, crew members of the Apollo 13 mission reported to MCC that trouble had developed with an oxygen cell on their spacecraft.”

By 1971, things looked a little more promising as Brand had been assigned as a backup command module pilot (CMP) to the Apollo 15 crew, often shadowing prime CMP Al Worden. He was just one erratic heartbeat, one vicious case of the measles, or one broken bone away from orbiting the Moon, deploying a lunar subsatellite, and performing the first deep space EVA in Apollo’s history. If Worden had, say, torn his meniscus playing handball, it would have been Brand – who more resembled a laid back California surfer than an astronaut, even though he was actually from Colorado – beaming with pride in the crew photo, seated between mission commander Dave Scott and lunar module pilot Jim Irwin.

However, as Brand wrote in his 2015 autobiography Flying Higher and Faster, “Late in our training, it became apparent that Al Worden was very healthy and not apt to contract the measles or break a leg, so it was unlikely that I would be taking his place. I didn’t really want anything bad to happen to him, but I realized my opportunity to fly to the Moon wouldn’t come until Apollo 18. Although never officially announced, our backup crew commander [Gemini 11 and Apollo 12 veteran Dick Gordon] had been informed that we would become the prime crew for Apollo 18.”

So he flew on Apollo 18, right? And all was right with the world (and Moon)?

Not quite. Brand added, “Ironically after Apollo 15, follow-on missions Apollos 18, 19, and 20 were canceled to save the taxpayers money. This was a great disappointment for Dick Gordon and me.” This would also prove to be a disappointment for Joe Engle. The backup crew’s Harrison Schmitt, who had a doctorate in geology, would replace the X-15 legend as Apollo 17’s lunar module pilot.

But there was another potential bright spot for Brand. Around the time he was completing his Apollo 15 backup assignment, he was asked to be the backup commander for both Skylab 3 and 4, and was now a potential replacement for Alan Bean and Jerry Carr. By mid-1973, again, it appeared that neither Bean nor Carr were going to break their legs, but another spaceflight opportunity reared its head not only for Brand, but also for fellow 1966 astronaut class member Don Lind: the Skylab Rescue mission, which was readied to bring home Bean, pilot Jack Lousma, and science pilot Dr. Owen Garriott following the loss of two out of four of their service module’s RCS quads. Brand enthused, “Don and I were excited about the rescue mission and highly motivated to do it.” A launch date was even set for September 14, 1973. The mission was to be 20 hours and 40 minutes in duration, and there was even a final flight plan. Brand’s chance to go to space was so close he could taste it. 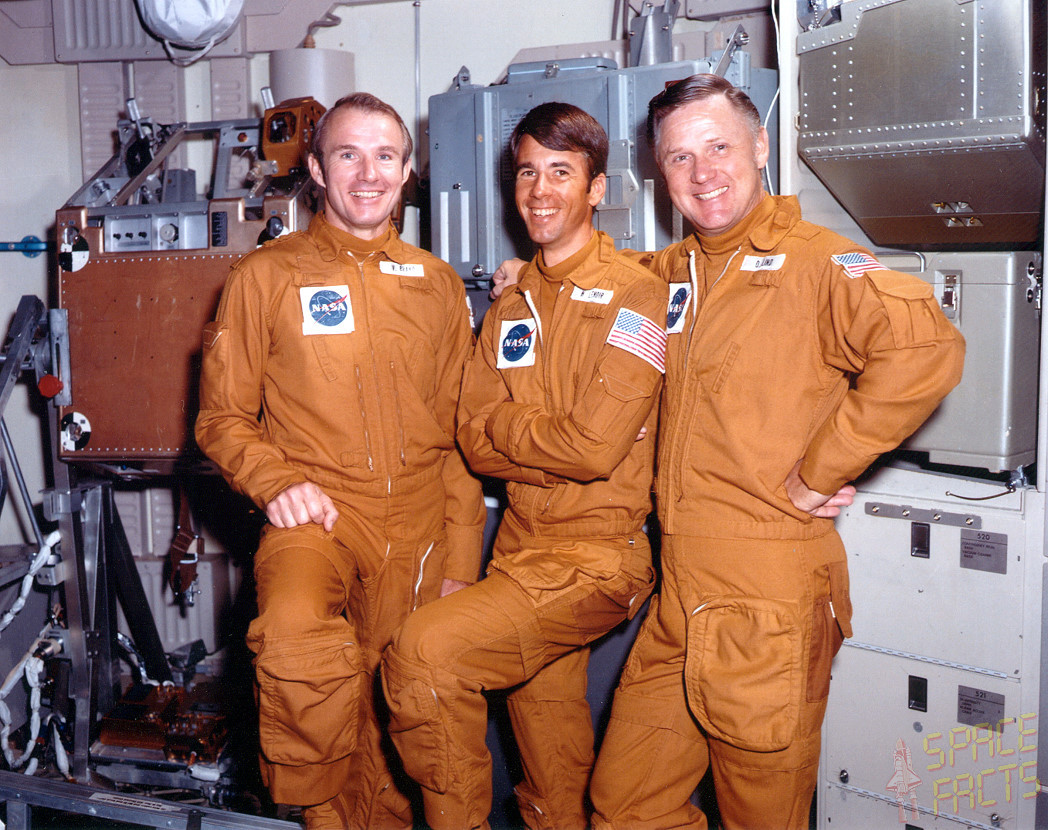 Brand stated, “I was assigned to work with flight controller Gary Coen, simulation instructor Roger Burke, and a few others on the question of how to achieve safe deorbit of the SL-3 CSM with failed RCS quads B and D. By mid-August, the failures had been further analyzed and were better understood.” To find out more details about how Brand and his small crew proceeded to troubleshoot the RCS quad failures and formulate deorbit strategies, I highly recommend you read Flying Higher and Faster. But here is a spoiler: the crew was so good at troubleshooting, they made their own mission unnecessary.

According to David S. F. Portree in a 2012 Wired article, “Almost as soon as the rescue plan was activated, however, analysis showed that the nitrogen tetroxide in the Skylab 3 CSM’s propulsion system was not tainted, and that the two thruster quad failures lacked a detectable common cause. Tests also showed that the Skylab 3 crew could maneuver their CSM with a single functioning thruster quad.” Bean and his crew proceeded with their 59-day mission, and splashed down safely on September 25th that year. The Skylab Rescue CSM now resides within the Apollo/Saturn V Center at the Kennedy Space Center Visitor Complex, untouched by space. And Brand didn’t leave so much as his desk. 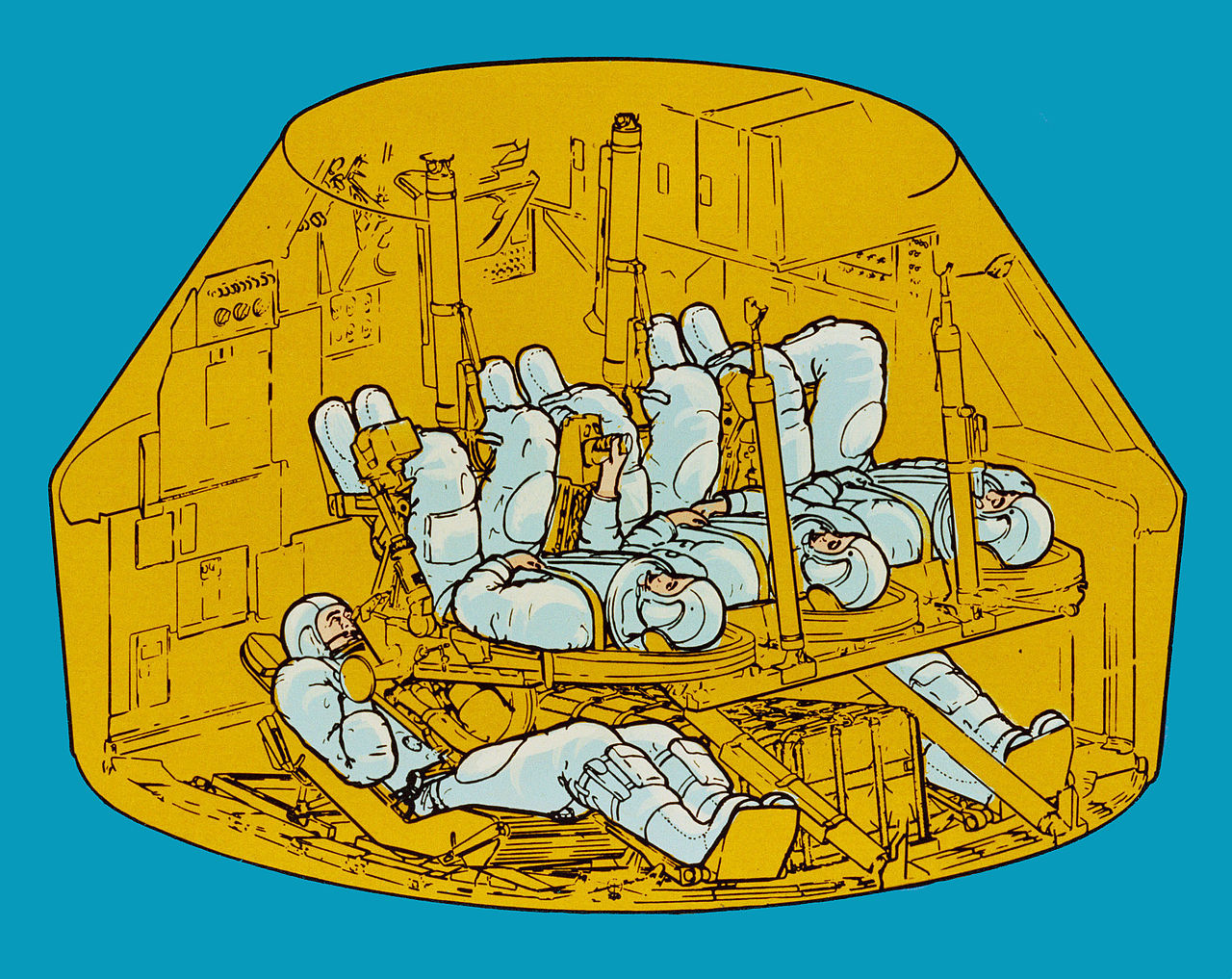 NASA image, 1973. “An artist’s concept illustrating a cutaway view of the general arrangement of the Skylab Rescue Command Module (CM). The standard Skylab CM accommodates a crew of three with storage lockers on the aft bulkhead for resupply of experiment film and other equipment as well as the return of exposed film, data tapes and experiment samples. To convert the standard CM to a rescue vehicle, the storage lockers are removed and replaced with two crew couches in order to seat five crewmen. The rescue CM would then be launched with a crew of two.”

There is a happy coda to this story. Brand related, “My assignment to the [Apollo-Soyuz Test Project] prime crew came about a year before I finished work as a backup Skylab commander.” On July 15, 1975, Brand finally made his much-longed-for spaceflight on the last Apollo mission, and didn’t even have to break Al Worden’s kneecaps. (He also commanded three Shuttle missions, but those are stories for a later time.) 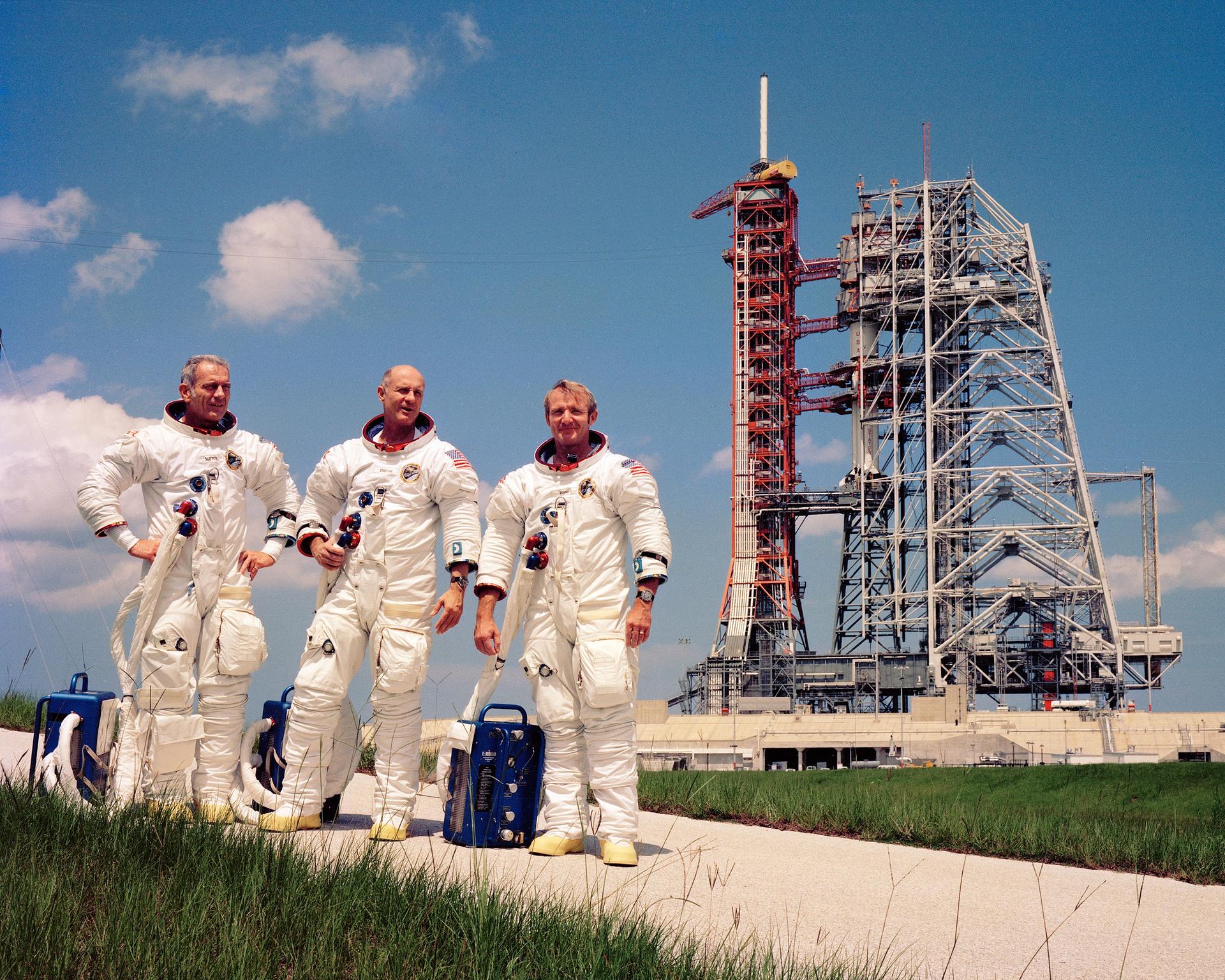 Speaking of Al Worden, with permission from Francis French, here is a short excerpt about his longtime friendship with Vance Brand from his upcoming book, The Light of Earth:

Vance wrote his memoirs the other year. Naturally, I turned right to the section about Apollo 15. Vance talked about how it seemed clear I wasn’t going to break my leg before the flight, so he wouldn’t be required to take my place. Ever since, I have joked with Vance about how much he wanted my legs to be broken so he could go to the moon.

But what if something bad had happened to me and Vance had taken my place? What if we had switched places?

I wouldn’t have gone to the moon – but I would have had one hell of a career. After the Apollo-Soyuz mission, Vance commanded the fifth space shuttle mission, the first one considered “operational,” and then commanded another two – the last one in 1990, almost two decades after I’d flown in space. Would I have traded one moon mission for four earth orbit flights? That’s pretty tempting.

After his four missions, Vance made another move that would have tempted me – he went to NASA’s Dryden Flight Research Center up at Edwards, and got back into flying research airplanes. He did this until 2008. Although he wasn’t flying in space any more, technically he was still on the astronaut list the whole time. So thirty-seven years after he backed me up on Apollo 15, Vance was still an astronaut. That’s really impressive.

…Vance is a cool guy. A very competent pilot, he could easily have flown in my place when needed. When you listen to that quiet voice, you don’t think he’s going to be a funny guy at first. But if you listen carefully, you’ll find a lot of little gems he throws out.

Just watch that he never breaks your legs.