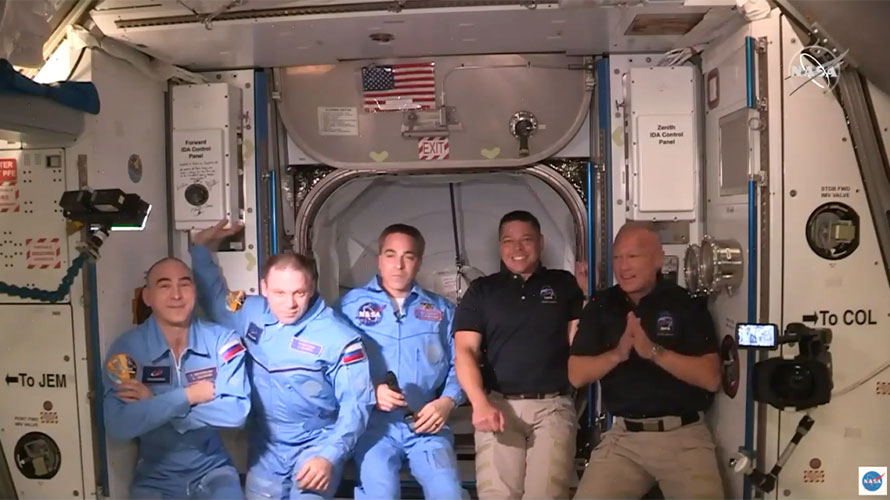 “On 20 July 1969 humans landed on the Moon. This was not merely a historical achievement, but an evolutionary and even cosmic feat.” — Yuval Noah Harari – Sapiens

The SpaceX “good ship” Endeavour accomplished a soft capture with the International Space Station (ISS), on May 31, 2020 at 10:10 a.m. EDT; hard capture (docking) occurred at 10:27 a.m. EDT. Hatches between the spacecraft and the ISS opened at 1:02 p.m. EDT. Docking was accomplished on the Harmony Node 2 port, while the spacecrafts were flying about 262 miles above the northern border of China and Mongolia. Already aboard the ISS was NASA astronaut Chris Cassidy (Expedition 63 Commander) and Russian cosmonauts Anatoly Ivanishin and Ivan Vagner.

On approach to the ISS the Endeavour astronauts took control, which was the first time a Crew Dragon has been manually operated. Two groups of manual flight tests were performed:  in the far-field and near-field regions of the ISS. The far-field is considered within the approach ellipsoid, a 4 kilometer by 2 km by 2 km boundary area that surrounds the ISS. Near-field maneuvers are within the ISS Keep Out Sphere (KOS), defined as a 200 m radius from the ISS mass center. In general, near-field maneuvering uses finer adjustments than far-field.

After the flight tests, the crew returned Endeavour to autonomous control for docking. Endeavour will remain docked at the ISS until approximately one month prior to the Crew-1 mission, which is currently scheduled for no earlier than late August. Crew-1 is classified as the first operational mission.

While docked, Endeavor will receive an exhaustive system checkout as a continuing part of the flight test program. During this period astronauts Robert L. Behnken and Douglas G. Hurley will be part of the ISS crew and help facilitate maximum utilization of the ISS.

Endeavour is planned to splash down in the Atlantic Ocean off the coast of Cape Canaveral. A thorough examination of the spacecraft will then be performed prior to the Crew-1 mission.