“Starship” – Not this August – or this Christmas – but Soon 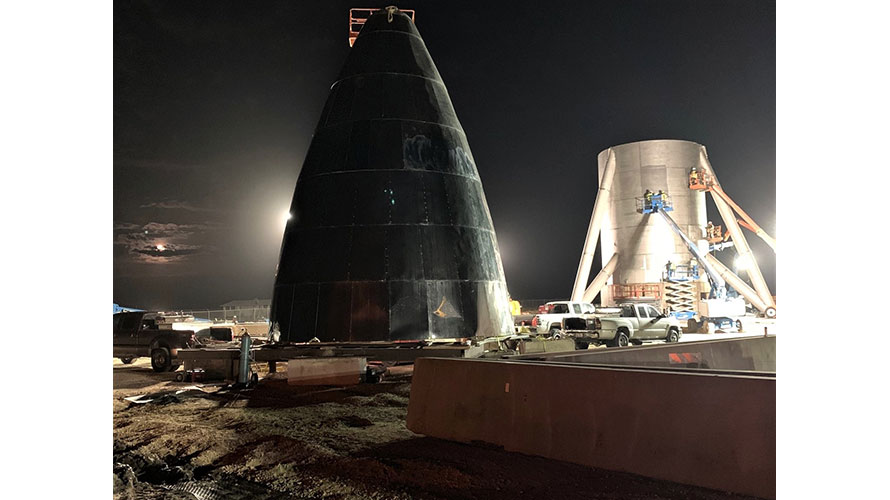 I remember movies like When Worlds Collide. There was always, at least in my gauzy memory, a scene of the mighty rocket being built. A long hull stretched into the darkness, swarmed by scaffolding and welders, a cascade of tiny stars falling to the ground between up-thrusting steel ribs. Our stiff-lipped heroes (rarely, the heroine) walked amongst the machines, carrying blueprints and wielding slide rules, shouting orders to the workers. Alone at a desk sat a grizzled scientist, frantically working against the clock to complete the design before the world ended or the aliens attacked.

The real future is never quite like the imagined future. Things are sometimes done in different ways, perhaps even stranger ways than we could imagine, like Pinterest and Snapchat and Russian Troll Farms using Facebook to attack the US. And the future never comes the way we wanted it. We’re still waiting for hotels on the Moon and flying cars.

But sometimes the future sneaks up on you. After long delay, it happens. And now it is happening. Men and women are building, not the first ship that will go to Mars, but the prototype of that ship. In a place called Boca Chica, Texas, workers are putting together the first “Starship” as Elon Musk now calls what was previously the “BFS” or Big Falcon Spaceship. This unseemly rush is driven not by fear of descending comets or the slimy tentacles of grotesque monsters, but by the blazing engines of commercial competition and sheer ambition. Yet behind it all we know that there lies a real monster, father time himself, ticking away the seconds of Elon Musk’s life. The world may have time, but Musk does not. He has perhaps 20 years of vitality in which to pursue his dream of settling Mars. And so the devil drives.

The task is immense. First learn how to build rockets independently of governments that would never endorse Musk’s plan for a city on Mars. Then make them cheap enough to gain a big share of the global launch market. And then make them re-usable, and cheaper still. And bigger. Then to learn how to dock in space, and land back on the Earth. To develop new rocket engines fueled by methane, which can be manufactured on Mars and hence allow for cost-effective return voyages. And finally to put humans into orbit, and bring them back. But all of this has been done by SpaceX, or will be done soon.

SpaceX has grown from nothing to the global leader in rocketry – the company to beat. With the successful launch of the Falcon Heavy, SpaceX has again broken new ground. On seeing the simultaneous return to launch site of the two side boosters even long time doubters started to shake their heads and admit that maybe Musk should be taken seriously. One imagines them nodding numbly while seeing the live video of Musk’s Red Tesla roadster circling the Earth before being blasted toward Mars. For a long time a lot of people have made a big bet that Elon Musk and SpaceX are going to fail. That this arrogant upstart outsider will never get a rocket to fly, or to land, or be re-used. One wonders how many Falcons need to reach orbit before these skeptics are silenced by the obvious. Eighteen last year. SpaceX launched 21 times in 2018, more than any other company, and more than Russia or the European Space Agency. Fortunately Musk does not measure his success by the silence of doubters but by the roar of rockets.

Soon, possibly as soon as next spring, the first “Big Falcon Spaceship” may rise from the pad for a short hop. There will be failure, and failure. But then success, and success, and more failure. But sometime soon – not this coming August, nor August in 2020, but some August soon, the ground will shake as it never has before, and the most powerful, most advanced rocket ever built will rise from the ground. The first stage (the “Big Falcon Rocket/Heavy”) will gracefully return to the launch site, landing in a cradle without using legs, ready to launch again. The second stage (the “Starship/BFS”) will vault skyward, orbit the Earth, deliver as much as 150 metric tons of payload to Low Earth Orbit, and return to the surface, landing with legs, ready to be re-fueled and launched again, this time toward the Moon and Mars.

On that day, the world will have changed. Dreams that seemed too large to ever become real will simply become business plans. Editorial writers will rhapsodize about how the space age we’ve been waiting for is finally dawning. That it was inevitable. Foreordained. But it never was, and still is not. The sight of the Red Tesla heading toward Mars has awakened a new generation of critics who dread the thought of humans living on Mars. And those critics will grow in number with each step Musk takes forward.

We must hope that they will be opposed by wiser voices, and that soon more ships will be built, and launched toward Mars, starting years of a desperate struggle to build a base on Mars capable of manufacturing the fuel needed to return to Earth. This will be followed by more years, and then decades as colonists live and die building a civilization on Mars. And then one day, long after Musk is dead, Martian colonists will erect a statue to honor him, perhaps side-by-side with another of Gwen Shotwell, and surrounded by the no doubt numerous heroes and heroines who died building Mars.

But those present on that day will still envy the souls who even as I write this are working late into the night to assemble what Musk calls a “Stainless Steel Starship” said to be constructed of a revolutionary high-temperature steel. It is happening. Right now. On December 24th, 2018. Not like in some old movie, but much better because it is real.

With a tip of the hat to one of my favorite SF novels – NOT THIS AUGUST – by C. M. Kornbluth.