The National Space Society (NSS) is pleased to announce Dr. Stephen Hawking as the 14th recipient of NSS’s Robert A. Heinlein Memorial Award. The award was presented to Dr. Hawking at a special ceremony at the Cooks Branch Conservancy in Montgomery, Texas on Wednesday, March 28 and is given in recognition of his outstanding and continuing public efforts in support of human space development and settlement. 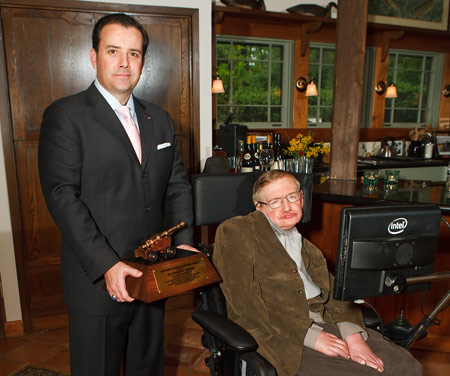 See also Dr. Hawking’s 25-minute video Why We Should Go into Space (with transcript).

In the last decade, Dr. Hawking has repeatedly and publicly advocated the need to move part of humanity off the Earth in order to avoid the destruction of the human race, either through self-destructive actions such as nuclear war, or natural phenomena such as asteroid collision or, eventually, the death of our nearest star, the Sun. “I believe that the long-term future of the human race must be in space,” says Hawking. “It will be difficult enough to avoid disaster on planet Earth in the next hundred years, let alone the next thousand, or million. The human race shouldn’t have all its eggs in one basket, or on one planet. Let’s hope we can avoid dropping the basket until we have spread the load.”

“Dr. Hawking’s public statements are very important, not only because of the respect his fellow scientists and many others have for him and his work, but also because they give more credence to these issues among scientists, the media, politicians, and the public,” said NSS Executive Director, Paul E. Damphousse, who will present the award to Hawking in Texas, along with Board of Governors member and Heinlein literary executor, Arthur M. Dula, CEO of Excalibur Almaz, a private spaceflight company.

Damphousse added, “Speaking for all our members, chapters, and partners who actively participated in the selection process, it is a distinct honor and privilege to bestow this honor upon Dr. Hawking – one of the greatest minds of our time.”

The Robert A. Heinlein Memorial Award, named after the author widely recognized as the “dean of science fiction writers,” honors those individuals who have made significant, lifetime contributions to the creation of a free, spacefaring civilization. Those individuals whose actions have involved personal, social, or financial risk are particularly meritorious. It is one of the highest honors bestowed upon an individual by the National Space Society because the award winner is chosen by vote of all of the Society’s members and chapters.

The date on which Dr. Hawking will receive the award exactly coincides with the 25th Anniversary of the founding of the National Space Society through a merger between the National Space Institute and the L5 Society. More formal celebratory events will occur at NSS’s 31st International Space Development Conference to be held in Washington, D.C., May 24-28, 2012. A video of the award presentation to Dr. Hawking will be shown at the 25th Anniversary Governors Dinner and Gala.