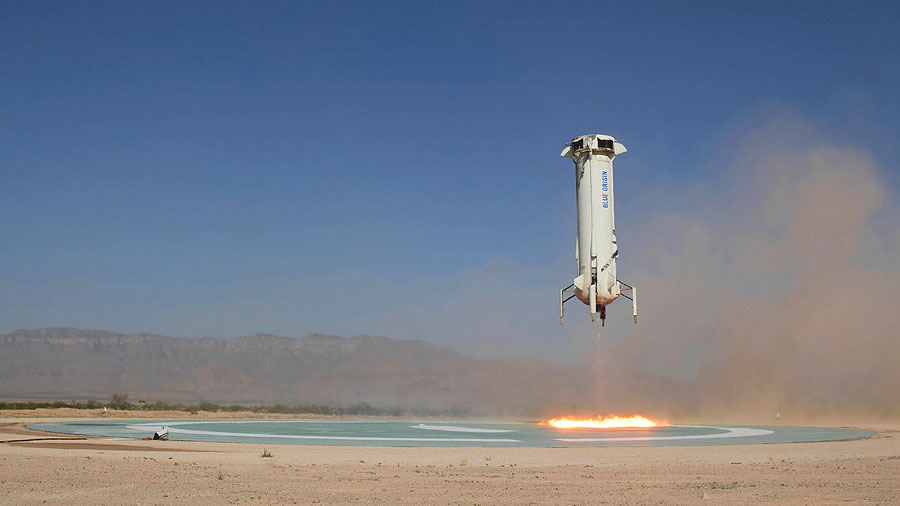 At 8:32 am CST Thursday May 2nd Blue Origin launched its New Shepard suborbital rocket and payload capsule to space on the 11th flight of their test program, a.k.a. NS-11. This was the fifth flight of this particular New Shepard booster and the same for the uncrewed capsule, known as Crew Capsule 2.0, or alternatively as RSS (Research Space Ship) H.G. Wells. Both rocket and capsule landed smoothly and safely at the Blue Origin West Texas facility as planned after a total flight time of 10 minutes and 10 seconds.

The flight was nominal, with the capsule achieving a maximum ascent velocity of 2,217 mph and an apogee of 346,406 ft (66 miles or 106 km), with three to four minutes of microgravity. The apogee is well above the 62 mile, 100 km internationally recognized boundary of space known as the Karman Line. A replay of the flight can be seen at the Blue Origin website, www.blueorigin.com, or on YouTube at www.youtube.com/watch?v=T84qFp4_3ns.

While NS-11, as flights before it, was chiefly flown to check the safety and reliability of all vehicle systems, the RSS H.G. Wells payload capsule itself carried 38 experimental microgravity payloads, thus also making NS-11, like its predecessor NS-10, a revenue flight for the company. Nine of the payloads were from NASA’s Flight Opportunities program and the rest from students and research organizations from around the world. The zero-g experiments ranged from medical technology, such as a suction device to treat a collapsed human lung in weightlessness, to 3D printing with metal, to a small suborbital centrifuge for artificial gravity experiments, among others. Due to demand New Shepard suborbital experimental payload flights will continue separately after the initiation of space tourist flights.

During the NS-10 flight in January, Ariane Cornell, Blue Origin Director of Astronaut and Orbital Sales, said, “We’re building a fleet of rockets. We’re going to have rockets dedicated to flying payloads, as well as rockets that are going to be flying people…. Human space flight is just around the corner. We’re aiming for the end of this year.” In mid-February, Blue Origin founder Jeff Bezos, in a talk at the Yale Club in New York City, answered a question about the startup of space tourist flights with: “This year…We will fly one flight this year — humans, I mean — but we will fly when we’re ready.” Ariane Cornell reiterated in her NS-11 flight narration that after all safety testing is successfully performed the first passenger flight is still planned for later this year, and in the new passenger-rated capsule dubbed RSS First Step that is currently in assembly.

Indeed, on the Blue Origin website, from the New Shepard page, via the “Become an Astronaut” button can now be found a “Reserve a Seat” form for prospective passengers to submit their contact information, and how many seats in the capsule they are interested in. While no pricing is given the page states “…you’ll receive early access to pricing information and tickets when we open reservations.”

The most recent Blue Origin applications for Federal Communications Commission (FCC) telemetry permits for the next two flights specify Periods of Operation of 6/01/2019 to 12/01/2019 and then 7/15/2019 to 1/15/2020. So perhaps the next test flight or two will be with the human-rated RSS Next Step capsule, and if all goes well, then the first Blue Origin space tourists will make their ascent in the second half of this year.

About two and a half months ago, on February 22nd, Blue Origin’s space tourism competitor Virgin Galactic made its second successful flight to space with their rocket plane VSS Unity. Piloting the craft were Chief Pilot Dave Mackay and Pilot Mike Masucci. A passenger was onboard for the first time, albeit a non-paying passenger: Virgin Galactic Chief Astronaut Instructor, Beth Moses. Unity reached an apogee of 56 miles, which is above the 50-mile altitude demarcation of space used by several U.S. federal departments and agencies. Richard Branson, founder of Virgin Galactic, subsequently announced plans to make his first flight to space on the 50th anniversary of the launch of Apollo 11 on July 16th this year, after one or more test flights. Passenger flights will then launch and land at the Spaceport America facility in New Mexico.

Perhaps by year-end Richard Branson and conceivably even Jeff Bezos will have personally flown to space.