The Texas Space Alliance (TXA) and the office of the Speaker of the Texas House are pleased to announce the meeting in Austin between Governor Rick Perry and numerous representatives of the nation’s top new commercial space firms. The TXA team brought together representatives from SpaceX, XCOR Aerospace, Sierra Nevada Corporation (SNC), Armadillo Aerospace, NanoRacks, Celestis, and ATK Liberty to talk about the needs of Commercial Space, and what Texas can do to fully embrace and nurture this vital, fledgling new industry. 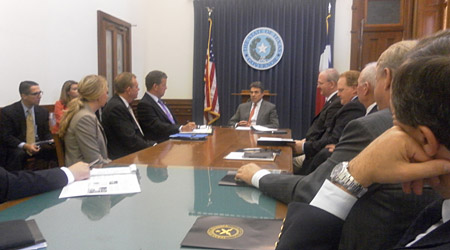 “We’ll defer to historians on where this goes in the books, but this is the first time ever that representatives from so many commercial (NewSpace) firms have gathered in one place to share their support for our shared vision for the future of Texas in space, and communicate that to the Governor,” said Bob Lancaster, TXA President. “Definitely a significant milestone in the history of Texas.”

Over the past year the TXA, members of the legislature, and the Governor’s staff have begun to forge a new set of partnerships, between federal, state and local governments and those who are ready to step up in the private sector – with the shared goal of lowering costs, creating wealth and jobs and re-casting how Texas “does space”. In the last legislative session TXA partnered with Blue Origin and helped pass a landmark tort reform bill as a first step in this journey. Meanwhile, the Governor’s staff has been working to bring new space firms to Texas and open new facilities here including spaceports. In the next legislative session TXA will build on the steps already taken and the hard work performed by the Governor and his staff to create the tools and find the funds needed to transform Texas into not only the leading “Space State” in America, but a leader in the world.

TXA’s Director of Policy and Government Relations Wayne Rast commented: “This is a meeting that our organization has long sought, and we are very pleased to be able to announce it today as the formal kick-off of our ‘Space for Texas’ campaign. We appreciate both the Governor and the Space business leaders that brought it to fruition, and who share our vision that our Great State can be the leader in Commercial Space. We hope this is the first of many meetings that lead to a thriving space industry and community in our state. Certainly after today it has been made emphatically clear that ‘Texas is Open for Space Business!'”

From the current Texas NewSpace companies; Armadillo, NanoRacks, Celestis, SNC, and ATK, to the recent SpaceX interest to expand from their McGregor engine test site to a possible launch site near Brownsville and last week’s announcement by XCOR that they are moving their R&D to Midland, it is clear commercial space efforts in Texas are on the uptick as these companies see what Texas has to offer. The TXA intends to serve as a catalyst to facilitate and accelerate this process.

TXA’s Rick Tumlinson concluded: “We can make Texas the best state possible for space activities; commercial, educational, and scientific. The future looks bright! New jobs, new breakthroughs and new inspiration for the youth of Texas lie just ahead – and yes, someday we believe there will be rocketships flying from the Lone Star to Mars!”