The End of the Space Age? 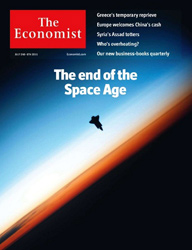 The cover story of the July 2 edition of The Economist loudly proclaims “The End of the Space Age.”

The last space shuttle flight is on the launch pad, so we can expect any number of gloom and doom articles like The Economist‘s  “The end of the Space Age.” These articles mourn the end of the socialist model of human space flight: government developed, owned, and operated vehicles taking government employees into space.  “The end of the Space Age” is particularly odd because it starts with a long list of vigorous commercial space activities, which together have a combined budget perhaps 10 times greater than NASA’s.  In other words, “No bucks, no Buck Rogers” doesn’t mean the bucks have to come from government.  In fact, there are a lot more bucks if they don’t.

The piece goes on to claim that we will henceforth be limited to Low Earth Orbit (LEO).  Apparently The Economist didn’t notice that the Russians have already sold one seat for a private mission around the Moon and, if they can sell one more, the mission is a go. Furthermore, as these articles frequently do, The Economist ignores the rover on Mars, the orbiters circling Mars, Moon and Mercury, the mission to Pluto, and the private robotic race to the Moon spawned by the Google Lunar X Prize. It’s as if Lewis and Clarke’s primary objective, creating detailed maps, is somehow irrelevant if done comprehensively and accurately by robots at relatively low cost.

What is really happening is that space development is moving beyond national prestige projects towards delivering direct value to people on the ground.  NASA, and The Economist, have not yet realized this. Most of NASA’s budget, the human space flight program and space science, has almost no direct benefit to the people who pay for it. The parts that do directly benefit taxpayers, Earth observation, solar science, protection from asteroids, and aeronautics, are woefully underfunded by comparison. Worse, space solar power receives no funding at all, even though successful development would solve major energy and environmental problems, not to mention put those who do it in the global energy driver’s seat. After all, what would make a nation stronger, a man on Mars for a few months or a terawatt of space solar power? What would protect us better, knowledge of quasars or knowing exactly which asteroids are likely to hit us and how to deflect them? The cost to government of developing space solar power and finding asteroids is a fraction of heavily funded but significantly less useful activities.

The Economist bemoans the fact that the International Space Station (ISS) is due to be deorbited in 2020.  They fail to mention that until a year or two ago it was scheduled to be deorbtied in 2014, and that by 2020 there may well be a private alternative. Bigelow Aerospace has two small space stations in orbit and is developing a full sized facility as you read this. The market: national human space flight programs for a tiny, tiny fraction of the $100 billion cost of the ISS. However, to succeed, Bigelow Aerospace needs a commercial launch vehicle for the crews. Fortunately, President Obama has proposed and funded a program to do exactly that:  develop private commercial human space launch.

I mourn the end of the shuttle. The shuttle is, by far, the most capable space vehicle ever built. However, the coming government fiscal tsunami will severely reduce all government programs, including NASA. We need to refocus NASA’s brilliant space program on developing industry and commerce. Our model should be space communications, which pays lots of taxes today, not the Apollo program, which has been dead for 40 years. Ask yourself, what will make us stronger and more space-capable: putting small numbers of government employees on big rocks far away? Or developing space solar power, space tourism, micro-g materials, and asteroid mining?