Washington, D.C. (December 6, 2012) – On the eve of the 40th anniversary of the launch of Apollo 17, the last human exploration of the Moon, Former Apollo Flight Director and NASA Johnson Space Center Director, Gerry Griffin, and planetary scientist and former NASA science chief, Dr. Alan Stern, today unveiled “The Golden Spike Company” – the first company planning to offer routine exploration expeditions to the surface of the Moon.

At the National Press Club announcement, Dr. Stern, Golden Spike’s President and CEO, and Mr. Griffin, chairman of Golden Spike’s board of directors, introduced other members of Golden Spike’s leadership team and detailed the company’s intentions to make complete lunar surface expeditions available by the end of the decade.

“A key element that makes our business achievable and compelling is Golden Spike’s team of nationally and internationally known experts in human and robotic spaceflight, planetary and lunar science, exploration, venture capital formation, and public outreach,” said Dr. Stern. The company’s plan is to maximize use of existing rockets and to market the resulting system to nations, individuals, and corporations with lunar exploration objectives and ambitions. This approach, capitalizing on available rockets and emerging commercial-crew spacecraft, dramatically lowers costs to create a market for human lunar exploration. Golden Spike estimates the cost for a two-person lunar surface mission will start at $1.4 billion. This price point enables human lunar expeditions at similar cost as what some national space programs are already spending on robotic science at the Moon.

Dr. Stern and Mr. Griffin described Golden Spike’s “head start” architecture that has been two years in the making and vetted by teams of experts, including former space shuttle commander Jeffrey Ashby, former Space Shuttle Program Manager Wayne Hale, and Peter Banks, a member of the National Academy of Engineering. It has also been accepted for publication in the American Institute of Aeronautics and Astronautics’ (AIAA) Journal of Spacecraft and Rockets, a leading aerospace technical journal. [Paper available here: An Architecture for Lunar Return Using Existing Assets.] 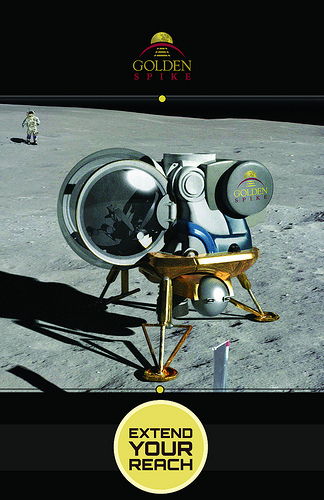 Golden Spike has initiated a series of studies with small and large aerospace companies to begin designs for the lunar lander, lunar space suits, and lunar surface experiment packages to be used on Golden Spike missions. The company also announced that it will sponsor an international conference for the scientific community in 2013 on the science that can be done on Golden Spike lunar expeditions.

Golden Spike expects its customers will want to explore the Moon for varying reasons—scientific exploration and discovery, national prestige, commercial development, marketing, entertainment, and even personal achievement. Market studies by the company show the possibility of 15-20 expeditions in the decade following a first landing.

“We could not be able to do this without the many breakthroughs NASA made in inventing Apollo, the Shuttle, the International Space Station, and its recent efforts to foster commercial spaceflight,” said Golden Spike Board chairman Gerry Griffin. “Building on those achievements, The Golden Spike Company is ready to enable a global wave of explorers to the lunar frontier.” “We’re not just about America going back to the Moon; we’re about American industry and American entrepreneurial spirit leading the rest of the world to an exciting era of human lunar exploration,” said Dr. Stern, “It’s the 21st century, we’re here to help countries, companies, and individuals extend their reach in space, and we think we’ll see an enthusiastic customer manifest developing.” Homer Hickam, author of Rocket Boys (the inspiration for the blockbuster space movie October Sky) and a member of Golden Spike’s extensive advisory board, remarked on the company’s public launch saying: “A reliable pathway to the Moon–‘Earth’s eighth continent’ will open our nearest neighbor in space to extensive new exploration, and also open it to the imagination of people everywhere.”

For more information go to www.goldenspikecompany.com.