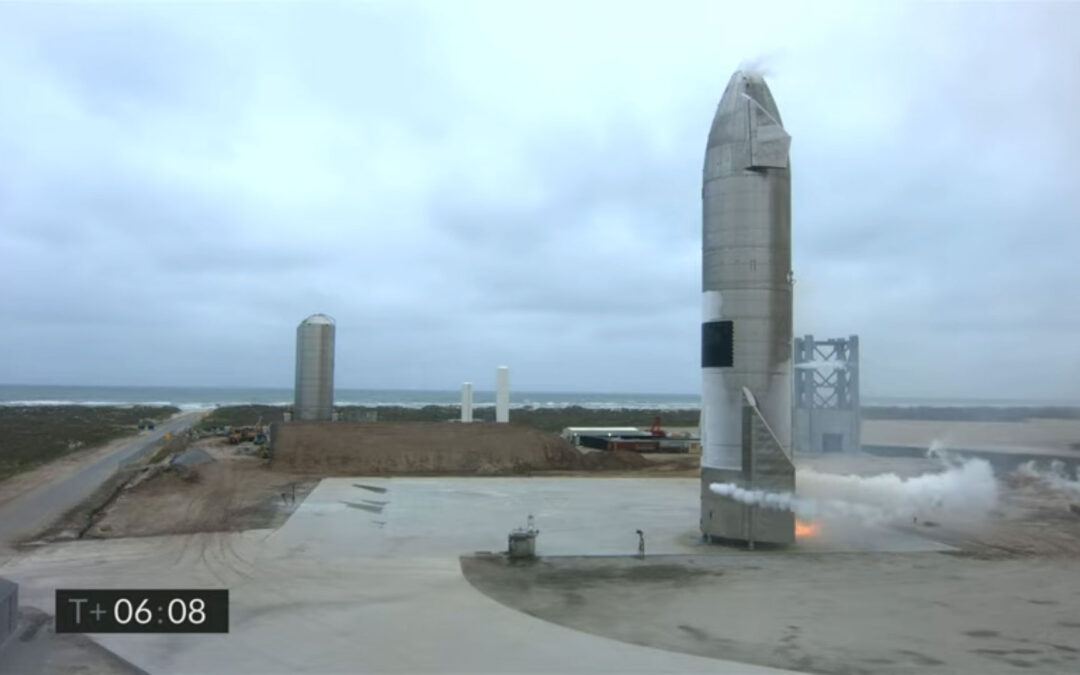 On Wednesday May 5 at 6:24 pm Eastern Time, SpaceX’s Starship Serial Number 15 (SN15) lifted off from the company’s test facility in Boca Chica, Texas. After rising to an altitude of about 6 miles (10 kilometers) on its three Raptor engines, the 160-foot (50 meter) Starship flipped to its side, performing a planned glide back to the launch center. It then righted itself quickly and performed a picture-perfect powered landing. This was the first of five prototype Starships launched that landed successfully and will be eligible for reuse (three others exploded and one exploded shortly after landing).

“This is a banner day for SpaceX,” said Anita Gale, the CEO of the National Space Society. “SpaceX’s Starship upper stage was tested to the planned altitude and glided and landed safely. This success opens the way for orbital test flights for Starship,” she added, “which will ultimately open space for robust and affordable settlement by humanity.”

SN15 was not the first Starship to land successfully—SN10 performed that feat on February 2 but exploded shortly after a successful touchdown. SN11 exploded at landing, as had two other previous prototypes. Flights of SN12-14 were skipped due to technological advances by the fast-moving rocket company. A few more low-altitude test flights are planned before SN20 goes into orbit if all goes well.

Dale Skran, NSS’s Chief Operating Officer, said, “These tests are a remarkable testament to the fast iteration and fail-forward philosophy of SpaceX, which is following a design and test regimen with Starship similar to that of the Falcon 9 rocket in the last decade. The Falcon 9 is now one of the safest and least expensive rockets in the world to fly, routinely landing and being refurbished for reuse. At least two of the boosters are coming up on their tenth flights, which lowers costs for access to space.”

Starship is just the upper stage of the system and will soon ride atop a large first stage called Super Heavy. While the Starships being tested now use three Raptor engines, future versions will use six and the Super Heavy will use about 30 engines. The combined stages will stand 390 feet (120 meters) tall with a massive circumference of 30 feet (nine meters). It will be larger and far more capable than the storied Saturn V Moon rocket of the 1960s. NSS believes that this flight marks an important step toward achieving the first milestone in its Roadmap for Space Settlement.

Once safely tested in Earth orbit, Starships should begin flying to the Moon under a planned contract with NASA to deliver American astronauts to the lunar surface in the next 5-6 years. A private flight to loop the Moon has also been contracted by a Japanese billionaire, Yusaku Maezawa, who will select nine other crewmates for a flight no earlier than 2023.

Starship is designed to ultimately make regular crew and cargo runs to the Moon and eventually to Mars, as well as to perform point-to-point high-altitude flights on Earth, allowing travel from the U.S. to China in less than an hour. For more information on Starship, see the SpaceX website.