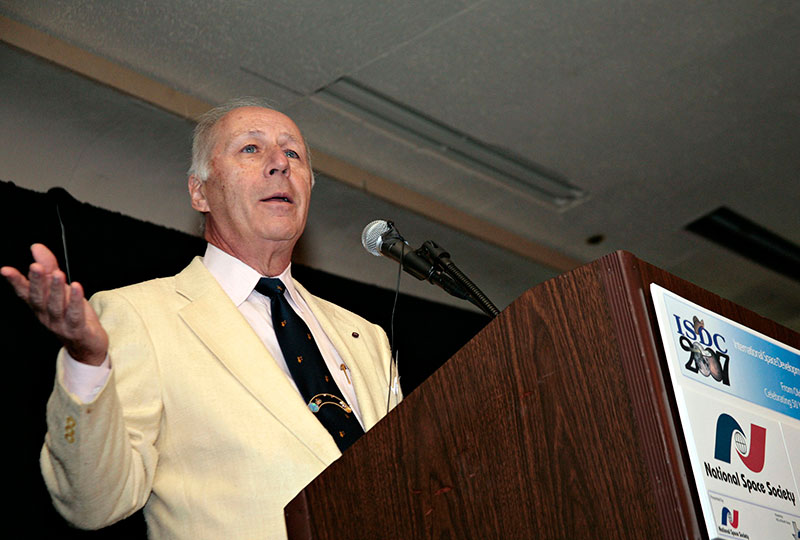 NSS Mourns the Loss of a Visionary NSS Leader

Dr. Ben Bova, a prolific and visionary author of science fiction, President Emeritus and Governor of the National Space Society, passed on November 29 at the age of 88.

“We have lost one of our fellow Governors and President Emeritus of the National Space Society,” said Karlton Johnson, Chairman of the Board of Governors for NSS. “Dr. Bova’s writings significantly contributed to NSS’s mission towards the settlement of space and gave us insights into many issues we’ll need to address in the final frontier. His insights into the future gave us a glimpse of the possible, and his intellect will be sorely missed.”

Dr. Bova was the author of more than 130 science fiction novels and nonfiction books, and hundreds of articles and essays. His involvement with space technology began with the very origins of the Space Age, working as a technical writer for Project Vanguard, the U.S.’s first satellite program.

Dr. Bova was the winner of many Hugo Awards (considered the premiere award in science fiction) and served as the editor of Analog Science Fact & Fiction and OMNI magazine. He was also a president of the Science Fiction and Fantasy Writers of America, a professional author’s group. Dr. Bova received the Lifetime Achievement Award of the Arthur C. Clarke Foundation in 2005, “for fueling mankind’s imagination regarding the wonders of outer space.” His 2006 novel Titan received the John W. Campbell Memorial Award for best novel of the year, and Dr. Bova was elected a Fellow of the American Association for the Advancement of Science (AAAS) in 2001.

Dr. Bova was an active contributor to many NSS endeavors and was critical to the Society’s growth and continued relevance. He was also an enthusiastic educator, teaching at Harvard University and New York’s Hayden Planetarium. Frequently featured on television and radio, he was a gifted communicator regarding space and science. Through his writings and media outreach, Dr. Bova predicted many future technologies, including the use of space solar power to supply Earth’s energy needs, a core value of NSS.

“Dr. Bova’s guidance and intellectual brilliance will be sorely missed by NSS, as well as by forward-looking individuals everywhere,” said Dale Skran, the Chair of the NSS Executive Committee. “Writers of such a prolific and visionary nature are rare, and the Society was blessed to have such a keen mind involved with its mission.”