The next great American frontier is UP!

The Space Development Steering Committee has released the following statement with accompanying graphic, which may be freely distributed:

In the 19th century, America redefined the global economy by opening a new frontier, a new landscape of real estate, resources, and opportunities. That American advance ended famine in Europe by giving the world the grain harvests of the Midwest. And some of the frontier real estate that seemed wildly overpriced at 80 cents an acre in 1836 is now worth over $12 million.

In the wake of the Great Recession of 2008, it’s time for America to pioneer again. This time by opening vast new landscapes not just to humanity, but to biomass, to ecosystems, and to the grand experiment of life.

In the shadow of the Chinese Century, one technology in which America continues to lead the world is access to space. Let’s use that technology to make the next great economic leap. Not just for ourselves, but for all humanity. 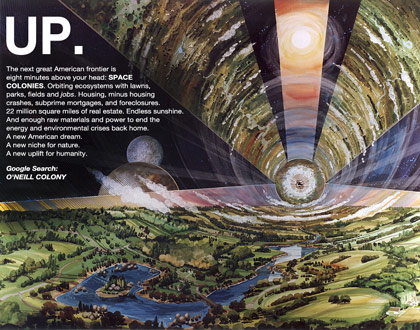 Click on image for larger version. May be freely distributed.

The Space Development Steering Committee is an informal group of space experts, founded in 2006 by Howard Bloom, with which NSS is affiliated.