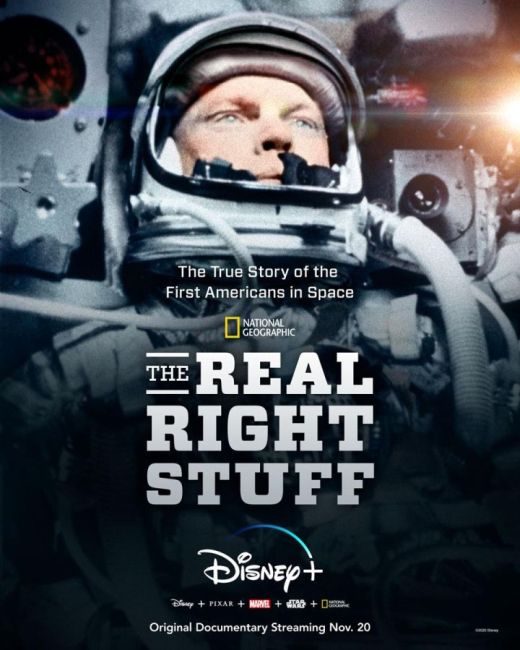 The eight-episode Disney+ series The Right Stuff, which comes to its season conclusion Friday, has depicted some of the struggles, stresses, and situations faced by NASA’s first astronaut cadre, better known as “The Mercury Seven.” In addition, NASA icons such as Bob Gilruth and Dr. Christopher Kraft have gained huge amounts of screen time, illuminating the bureaucratic underpinnings and political forces motivating the United States’ first crewed spaceflight program. In it, viewers take in a (albeit somewhat fictionalized) vision of the U.S. space program’s early successes – and embarrassing rocket failures (remember “the four inch flight”?).

This isn’t the first time The Right Stuff – the epic 1979 book by author Tom Wolfe – has gotten the screen treatment; in 1983, the book was adapted into a Philip Kaufman-directed movie (although it’s notable to point out that the book and 1983 film both tackle the story of Chuck Yeager and early supersonic test flights, which the Disney+ series does not focus upon). Now, a documentary set to debut tomorrow on Disney+ sets out to recapture the actual world of the first U.S. astronauts, early NASA, and the people behind the effort to send the first Americans to space. The Real Right Stuff not only tells the astronauts’ story, but newly unearthed sources set the mood of the era – when the whole country and world were turned on to a new Space Age future.

The two-hour documentary is directed and produced by Tom Jennings, an Emmy® and Peabody Award-winning filmmaker also responsible for productions including Challenger Disaster: The Lost Tapes and Apollo: Missions to the Moon. “If you want to see the real people and hear their voices, it further brings to light in a non-fiction way who these people were and what they went through – and maybe more importantly, who we were as a people at the time,” Jennings told me in an interview Monday. “Because we tell our stories – not only about who the astronauts were, but how everyone on Earth was reacting to what they were doing.

“I think it gives a perspective of not only seeing the real people and hearing their voices…but also to see us during that era, as a society, and who we were then. The viewers can decide for themselves ‘did we change much, or did we not change at all?’”

Indeed, the documentary captures the seeds of the “reality era,” as previously-unknown test pilots were catapulted into sudden fame on the world’s stage, and how the public was ravenous for reports of their exploits.

The Real Right Stuff also features long-unseen materials that set out to capture the mood of the late 1950s and early 1960s, a time when post-War austerity led to the gleaming, glamorous Space Age. For example, the documentary debuts interview tapes Tom Wolfe made with Rene Carpenter in the early 1970s during the research process for the book The Right Stuff. Carpenter, who died at age 92 earlier this year, was a force of her own in the spaceflight community despite being married to Mercury Seven astronaut Scott Carpenter; she was a writer and space commentator, penning articles for LIFE magazine and doing Apollo 7 launch coverage for NBC in 1968, both gutsy moves by a woman some perceived as being the archetypal blonde, bubbly astronaut’s wife.

Moreover, the documentary debuts the post-flight press conference – with synced audio – concerning Gus Grissom’s 1961 Liberty Bell suborbital space jaunt, which is still a source of some controversy within space history circles (Liberty Bell sank after its hatch blew independently of any interference by Grissom, not to be recovered until 1999). Grissom, who tragically died during 1967’s Apollo 1 fire, drew fire in The Right Stuff book and 1983 movie for having been perceived to have blown the hatch himself, leading to the loss of the spacecraft. (The Disney+ series has not yet depicted Grissom’s flight.) This is a must-watch piece of film for those who are interested in Grissom’s (often incorrectly reported) story.