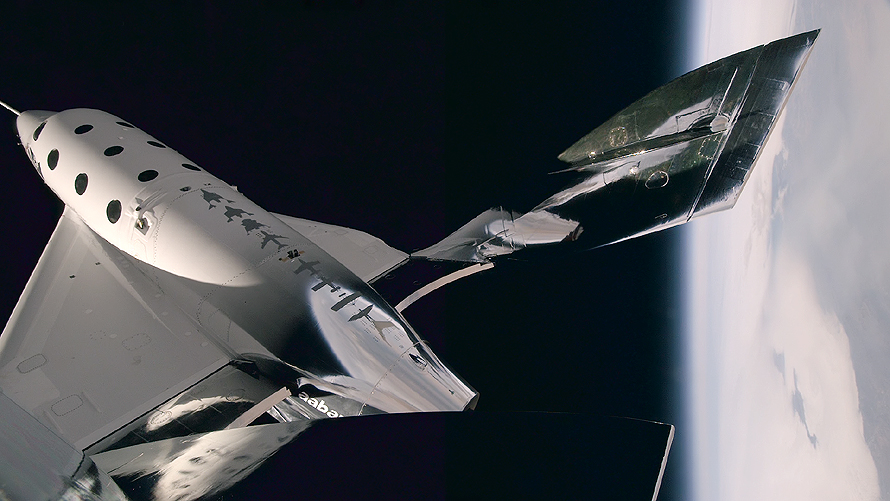 Less than two months after the previous test, Virgin Galactic on Thursday afternoon (July 26) launched its reusable Virgin spaceship (VSS) Unity to a new altitude record for the vehicle on its third successfully powered supersonic flight towards space. The launch aircraft, Virgin mothership (VMS) Eve, also known as WhiteKnightTwo, flew out of the Mojave Air and Space Port and carried VSS Unity, the spaceship part of the SpaceShipTwo system, to 46,500 ft at which altitude it released the space plane. Igniting its main rocket engine, pilots Dave Mackay and Mike “Sooch” Masucci then took Unity in a near vertical climb with a 42 second burn to over Mach 2.4, reaching an apogee of 170,800 ft (32 mi or 52 km) in the mesophere high above the Earth.

The six space tourist passenger seats in the Unity cabin were unoccupied except for an instrumented mannequin. Instrumentation data was gathered on the ship, including cabin parameters such as temperatures, pressures, vibration, and radiation, among others. After VSS Unity landed safely at the spaceport, Chief Pilot Mackay said in a report, “This was a new altitude record for both of us in the cockpit, not to mention our mannequin in the back, and the views of Earth from the black sky were magnificent.”

Unity’s test flight Thursday followed by eight days the most recent test flight on July 18th of its space tourism competitor Blue Origin, who successfully flew their New Shepard booster and passenger capsule to new heights in a third re-flight and landing. Their passenger capsule, although without any people on board, achieved a 389,000 ft (73 mi or 119 km) apogee in space with a test of its capsule emergency escape rocket.

The U.S. Air Force considers 50 mi (80.5 km) to be the boundary of space, which is below the currently accepted international boundary, known as the Karman Line, at 62 mi or 100 km altitude. Thursday’s flight of Virgin Galactic’s VSS Unity reached a new height of 32 mi (52 km) and a top speed of Mach 2.4 compared to an altitude of 22 mi and Mach 1.9 on its previous powered test flight. The crewed VSS Unity has flown a total of fourteen times including unpowered glide flights.

It is not known how many test flights remain before the Virgin Galactic company makes suborbital passenger flights to space, although in May founder and billionaire Sir Richard Branson said, “Before the end of the year, I hope to be sitting in a Virgin Galactic spaceship, going to space.” The company has reportedly sold about 650 tickets at a cost of $250K each. Likely a VSS Unity flight with Sir Richard aboard will be prior to initiating flights with paying tourists, so it may be early 2019 when VSS Unity flies with real tourists.

Meanwhile competitor Blue Origin is approaching crewed test flights on its New Shepard suborbital spaceship, possibly to take place yet this year, then to be followed by tourist flights, likely sometime in early 2019 which is when they are expected to start selling tickets.

There are no bookmakers known to be offering odds at this time as to which company will make it to space first with tourists! Suffice it to say however, that NSS members are keenly watching progress toward routine sub-orbital space tourism.