When We Never Left Earth: …In Which STS-1 Was Supposed to Be a Sub-Orbital Mission 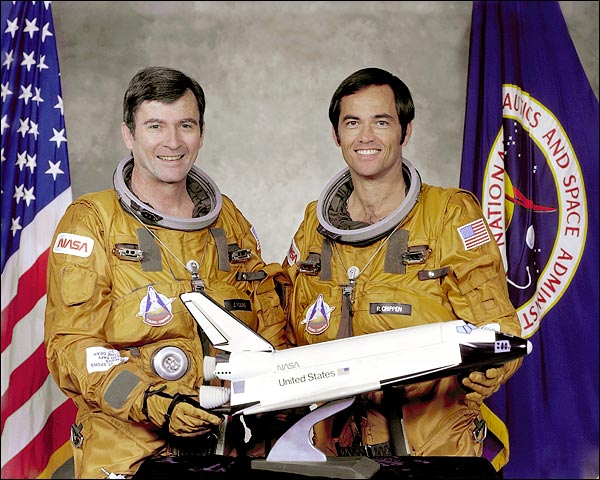 If John Young says it’s dangerous, it officially is. NASA photo.
Some background on this post: in the space shuttle days, one of the four launch abort profiles was “Return to Launch Site.” This was a risky, at best, proposition which forced the crew to jettison boosters, flip the shuttle and half-empty external fuel tank around at approximately Mach 7 (??!!) and somehow land the shuttle on a nearby runway. Yes, this was an actual abort profile suggested by NASA at one time. Apparently, it had been tried out in simulators, which meant it worked theoretically. However, no one was quite sure if it would be successful in a real-life emergency situation.
Apparently, NASA engineers wanted to make STS-1 a sub-orbital mission to try and see if this whole insane scenario worked. John W. Young, no stranger to crazy stuff, refused; the prospective mission was called off. STS-1 launched after many delays in April 1981 and performed 37 successful orbits before landing at Edwards Air Force Base within two days. A former NASA employee told me once that one abort scenario had the two crew members (the first four shuttle flights were considered test flights) jumping out of the shuttle using ejection seats. However, given the extreme heat (5,000 degrees Fahrenheit plus) generated by the solid rocket boosters, nobody really wanted to try this. The early shuttle flights give one an understanding of how risky the new space transportation system was in its early days; at least Mercury, Gemini and Apollo had successful unmanned tests behind it. STS-1 was, in essence, the very first true test flight. The Return to Launch Site abort procedure, thankfully, was never attempted or used in the entire history of the space shuttle program.
Other interesting cancelled shuttle missions include the “Skylab reboost mission,” in which astronauts Fred Haise and Jack Lousma were supposed to outfit the ailing Skylab space station with something called the “Teleoperator Retrieval System” in an attempt to boost it into a higher orbit. This mission was supposed to take place in 1979. Due to delays in the shuttle program, this never happened and Skylab reentered over Australia in 1979, killing at least one bunny rabbit and a cow. Fred Haise flew Approach and Landing Tests in 1977, utilizing the shuttle Enterprise (which never left Earth and was only used for landing tests). He retired from NASA in 1979 and never flew on a space shuttle flight.
In 1986, Bob Crippen was supposed to command STS-62A (Discovery), which was supposed to be the first shuttle mission conducted in a polar Earth orbit. Due to the Challenger disaster, this mission, too, was cancelled. It was also supposed to be launched from Vandenberg Air Force Base. The whole thing sounds almost too cool for words but fate, unfortunately, had other ideas in mind.
For more information about the Return to Launch Site (RTLS) abort profile, check out this article from the December 2000 issue of Popular Mechanics. Also, check out this interesting blog about various space missions which never happened called Beyond Apollo.