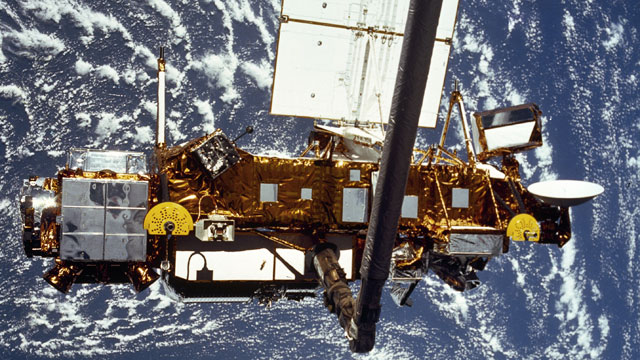 This is what the satellite which is falling from orbit – the Upper Atmosphere Research Satellite – looks like. So if you see this in your backyard, you might want to call NASA and let them know. NASA photo.
There’s been a lot of hype about the Upper Atmosphere Research Satellite (deployed by space shuttle Discovery in 1991) falling back to Earth. The satellite is currently expected to enter the Earth’s atmosphere tomorrow (also known as Friday, September 23 for those who are confused about what day it is) during the early afternoon. Before you freak out and break out the Skylab shields from 1979, here’s a short primer on why you probably shouldn’t be worried about this thing crashing into your house and ruining your swimming pool.
Keep in mind that the Earth’s atmosphere upon reentry is really, really, REALLY hot. I am talking about 6,000 degrees Fahrenheit hot, or something in or about that general hotness neighborhood. Most of the satellite’s components will be burned up in the high atmosphere. There are parts of the satellite which are expected to survive reentry because they are made of materials which happen to have a high melting point. Only 26 parts like this have been identified. Also, the Earth is comprised of 70% water. Statistics dictate that any satellite  parts and pieces would most likely enter an ocean, never to be seen again. If you want to learn more, click on this CNN article.
This is nothing compared to when Skylab was reentering in 1979 over Australia. Several large pieces of the first U.S. space station survived the reentry, and generally horrified everyone at the time. Also, Skylab weighed 70 tons. That is way larger than the pieces which may or may not enter our atmosphere around this time tomorrow. Contrary to what you may have heard, no one was injured due to Skylab’s reentry. (Click on this link to read more about Skylab’s reentry.)
In summation, I wouldn’t stay up at night worrying about this satellite crashing on your vintage Corvette. Here’s a list of things you probably should actually worry about:

There. Those are some things you should legitimately be worried about.