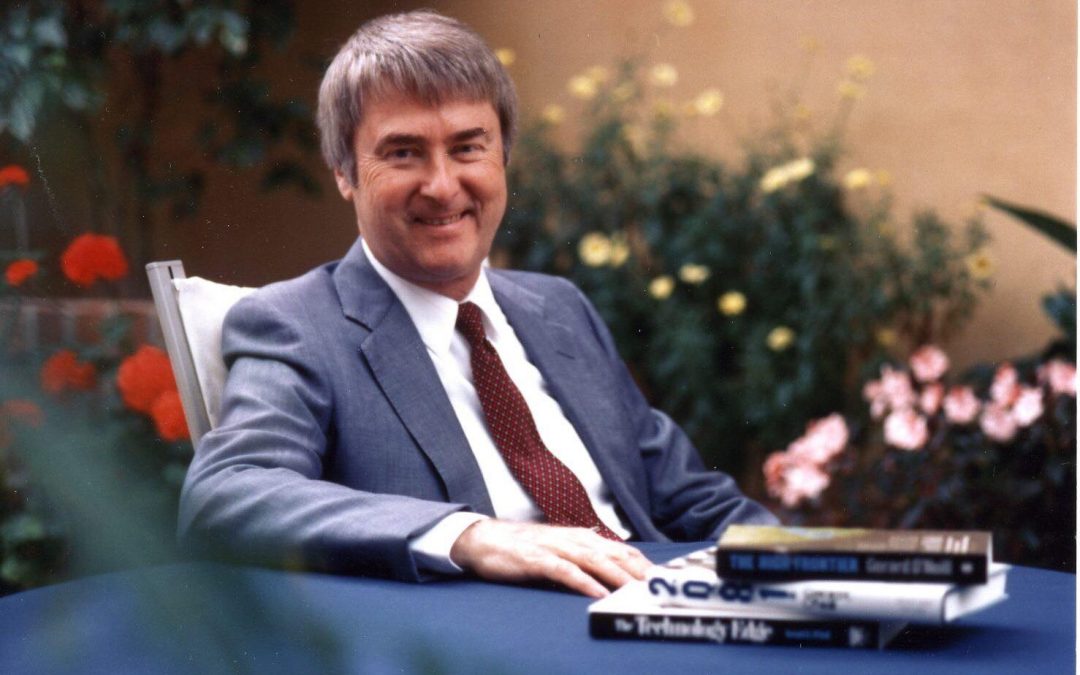 “Our country has not survived its first two centuries on the basis of promised happiness…rather, on the promise that the search for happiness could go on.” Dr. Gerard K. O’Neill

In the last installment of this series, we saw Dr. Brian O’Leary trade his “cup of tea” – a career in astronomy, and aiding in Gerard K. O’Neill’s space settlement initiatives – for an unlikely new path that would become the subject of much derision among his former colleagues. While O’Leary rather pointedly abandoned the ideas of his friend and colleague, O’Neill himself would adapt to the new decade surprisingly well after his first flush of fame abated, and when his treatises about space settlements and futurism lost some of their luster with the public.

As the mid-1970s stretched into the early 1980s, O’Neill established a template for a new type of science communicator, gaining a level of fame exemplified by another working scientist from that era, Dr. Carl Sagan. His iconic 1976 book, The High Frontier, went into reprints; the 1978 Bantam version not only increased O’Neill’s public profile, but also was a watershed moment in the intersection of spaceflight literature and art. It was illustrated with “60 dramatic space age drawings” (as the cover boasted) by renowned space artist Don Davis, who by that point had worked for NASA and the U.S. Geological Survey. Many of the paintings and illustrations of O’Neillian space settlements by Davis and other space artists of that era went on to embody the idea of “communities in space” for the next several decades in an array of spaceflight books. In addition, O’Neill would enterprise his visions in many popular magazines and on television, including media outlets such as People magazine, on the Tonight Show with Johnny Carson, on CBS’ 60 Minutes, and on PBS’ Nova. His lectures across the country were always jam-packed.

Moreover, his endeavors to develop his vision resulted in three historic workshops at NASA Ames for three years (1975, 1976, and 1977). While the 1975 and 1977 workshops are fairly well-documented and documentation concerning them is publicly available, the 1976 workshop – which concentrated highly on the physics and logistics surrounding his mass driver idea, a non-rocket way to send payloads to and from deep space – is less well-documented. However, some recordings from this workshop – which even feature a 36-year-old O’Leary, who was still working with O’Neill at this time – exist on the Space Studies Institute’s Soundcloud channel, and are worth a listen for those interested in the subject. The results from the 1976 workshop are cataloged in what has infamously been called “the yellow mass driver book,” which is out-of-print. If you find it, it costs upwards of $400.

In 1981, O’Neill published 2081: A Hopeful View of the Human Future. This book, and the 1980s in general, would prove to mark the decline in popularity of his vision. The idea of space settlements began to seem unreasonably far-fetched to his critics, and 2081 was deemed as being too optimistic and futuristic even among his most ardent supporters and fans. It bears mentioning that by 1981, the grim realities of the 1970s – gas lines, oil crises, inflation, pollution, and the constant threat of nuclear annihilation either by runaway reactors and/or weapons – were being replaced by Reagan-era “city on a hill” optimism, and O’Neill’s visions were not only seen as irrelevant and the stuff of science fiction, but tinged with the stink of the previous decade, and – gasp – hippie-esque utopianism.

It would be easy to characterize the fact that O’Neill’s colonies didn’t make it to “L5 in ‘85” as a failure, but this would be reductive. As we will see in future series installments, O’Neill’s legacy would still come to be largely defined by The High Frontier, and would find popular boosters particularly within the last decade, as spaceflight would gain traction among private companies.

O’Neill, however, saw this downswing – and was surprisingly practical about it, and well-prepared to take the 1980s by storm. While he continued enterprising his space settlement vision despite any and all criticism, he entered the third phase of his career as an entrepreneur. In 1980, O’Neill would work to patent an idea called Radio Determination Satellite Service (RDSS). While GPS – now popularly used on our smartphones to get us to and from landmarks – was a new service, it was only available for military purposes at this time. O’Neill’s idea – which would come to be known as Geostar, the project he began in 1983 – was to make satellite positioning services available to all kinds of vehicles, and to make it eminently useful for vehicles – and people – in emergencies.

According to former AOPA President John L. Baker’s 2010 obituary on that organization’s website, Baker and O’Neill saw a need, and then proceeded to address it. “Baker identified the feasibility of creating a satellite-based navigation system – one that didn’t rely on ground-based navaids. Long before GPS navigation was explored by the civil sector, Baker sought experts such as Princeton’s Gerard O’Neill to advance the satellite cause. Because of this, O’Neill’s seminal theories on the subject were published in an article that appeared in the September 1983 issue of AOPA Pilot. Dubbed ‘Geostar,’ this concept was one more illustration of how Baker could lock onto issues long before they became issues, and to see the forest for the trees,” wrote Thomas A. Horne. It bears mentioning that O’Neill drew on his own experiences as a pilot to pioneer this particular technology, as well. With typical practicality and intensity, he went all in on Geostar, full swing.

Then, in 1985, O’Neill – who had been feeling unwell during the past year – was diagnosed with chronic lymphocytic leukemia (CLL), a rare bone marrow cancer. The next installment of this series will reveal how, facing this diagnosis, O’Neill lived out the remainder of his life – and will also catch up with former colleague O’Leary, as the former astronomer delves further into holistic medicine, inner awareness, and – sometimes – UFOs.