You’ve Seen The Apollo 11 Movies; Now, Here Are The Books 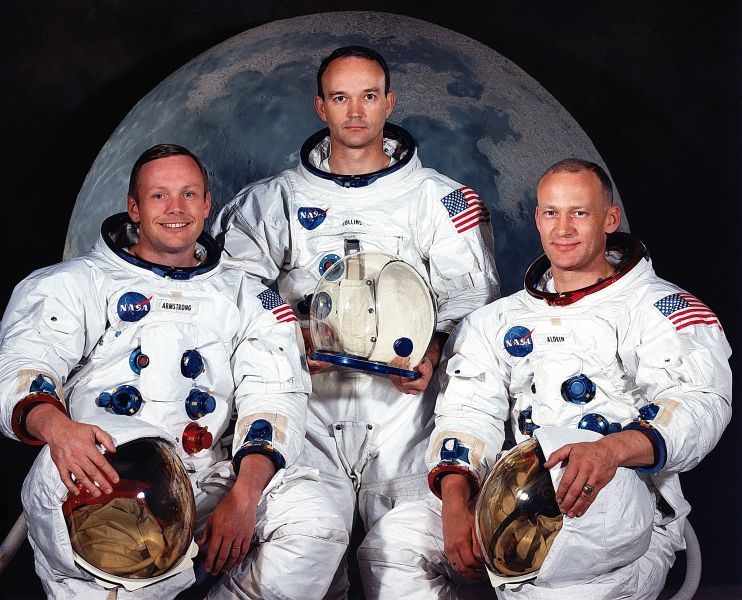 The last six months have brought us two major movies about Apollo 11, and some of its figures: First Man (released October 2018), and Apollo 11 (currently playing in theaters). While this 50th anniversary year will bring many related films, documentaries, and books to the fold, here are five that stand out. While four have either been recently released or are awaiting release, one is a 1970 classic that should be revisited by space fans and those who are maybe just learning about Apollo alike.

Picturing Apollo 11: Rare Views and Undiscovered Moments, by J.L. Pickering and John Bisney (University of Florida Press): Space historian Pickering and journalist Bisney have combined many never-before-publicly-seen photos of the era with text that judiciously explains the entire Apollo 11 mission from training through splashdown and quarantine (and beyond). Space buffs will be thrilled to see rare shots of, say, Michael Collins posing model-like by a simulator, and of course the stunning lunar vistas captured by Armstrong and Aldrin during their short time upon the Moon’s surface.

First Man: The Annotated Screenplay, by Josh Singer with James R. Hansen (Titan Books): While the title of this book pretty much explains the bulk of its contents, devotees of First Man the movie and Hansen’s 2005 Neil Armstrong biography (which remains the only authorized biography of the publicity-shy late astronaut) will enjoy reading about the decisions behind keeping certain scenes and personalities within the film.

Moreover, it’s attractively illustrated, featuring scenes from the film and pertinent NASA photos from the 1960s. It’s exciting to read about how actual astronauts and key figures contributed to the movie’s accuracy; for example, Joe Engle – X-15 spaceplane pilot and NASA astronaut, and the only space shuttle commander to conduct a partially manual reentry – was heavily consulted for the film’s X-15 scenes, which Armstrong also piloted before his 1962 NASA astronaut selection.

The Step: One Woman’s Journey to Finding her Own Happiness and Success During the Apollo Space Program, by Martha Lemasters (Morgan James Publishing): The Step provides its readers with a different perspective of the Apollo program, one that doesn’t necessarily include all men, wearing the ubiquitous of-their-time NASA-issued American Optical sunglasses, piloting and training for thousands of hours. Lemasters is one of the few women who worked for an Apollo contractor at Cape Canaveral during the 1960s. The Step is her story about her rise from divorced single mother to writer at IBM, at a time when IBM was building and enterprising one of the key components of the Saturn V Moon rocket, the Instrument Unit (IU).

The story of Apollo, its workers, and its unique challenges are told back-dropped by her life’s story, which involves coming into her own as a woman during a time when women were frequently underrepresented (or not represented at all) in scientific fields. Lemasters uses a fine brush to paint a vivid picture of what it was like to be a young, attractive woman in a field that did not attract many young, attractive women, and how a rather demure miniskirt was capable of scandalizing an entire Vehicle Assembly Building.

First on the Moon (2019), by Rod Pyle (Sterling Publishing): Writer and space historian Pyle, who is the editor-in-chief of NSS’ Ad Astra and authored the recently-published Space 2.0, has put together an unmissable journey of a book that explains each step of the Apollo 11 mission, including Apollo’s humble origins. The reader sees how America’s space conquest goes from strength to strength in a short decade’s time, from recovering from embarrassing early launch failures (such as the infamous “Kaputnik”) to achieving one of the world’s greatest engineering feats, putting two humans on the lunar surface with no major failures.

Pyle’s book is also beautifully illustrated, featuring rare photos and helpful diagrams showing each mission phase. What also makes this book distinctive is a chapter looking forward to the future of lunar explorations, featuring the sci-fi visions of artists including James Vaughn. This chapter hearkens to the theme of this year’s ISDC, which is “Back to the Moon to Stay.” First to the Moon is scheduled for release on April 2, 2019.

First on the Moon (1970), by Armstrong, Collins, and Aldrin written with Gene Farmer and Dora Jane Hamblin (Little, Brown and Company): This book was one of the “gateway drugs” that got me into spaceflight during my childhood, and still stands the test of time after nearly 50 years. Its perspective upon the historic mission is still somehow startlingly fresh after all this time, and it captures the personalities of key personnel almost better than anything I have ever read. While it’s championed as “the astronauts’ own book,” we also read about figures including secretary Lola Morrow and astronaut nurse Dee O’Hara. But if astronauts are your thing, you’ll enjoy reading about each phase of the mission in the astronauts’ own distinctive voices.

This volume – and each volume on this list – deserves a revisit (or visit) this summer, as we celebrate 50 years since the signature Moon landing mission.