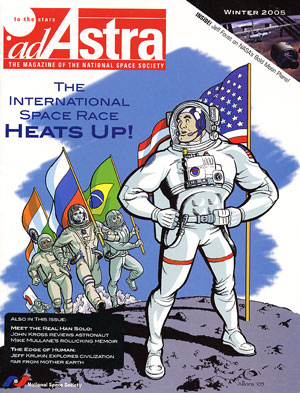 14
LUNA-PALOOZA!
NASA’S BLUEPRINT FOR RETURNING TO THE MOON
The U.S. is leaving Earth orbit, but skeptics ask: Is pulling from the past compromising the future?
By Jeff Foust

18
THE JAMES WEBB TELESCOPE:
OVER BUDGET BUT ON TRACK
Changes are in the works for the proposed successor to the Hubble Space Telescope. To help offset a billion dollars in projected budget overruns, the James Webb Space Telescope (JWST) may require reduction in its capabilities at the short wavelength end of its observing range, NASA officials say.
By Michael Schirber

24
RUSSIA:
PHOENIX RISING OR LION IN WINTER?
Its Cold War glory days behind it, the former Soviet Union’s space program has set its sights on being the leading international launch service. But is time on its side?
By James Oberg

28
BRAZIL:
REVIVING A NATION’S SPACE DREAMS
Its launch industry long stymied by the United States, Brazil now actively seeks international partners despite protests from its neighbor to the north.
By Frank Braun

30
INDIA:
LOOKING EAST AND WEST FOR PARTNERS
India’s eagerness to enter the space race, though tempered by technological limitations, could lead to more investment in military applications.
By Dinshaw Mistry

32
JAPAN:
RISING SUN IN A CLOUDY SKY
Long dependent on the U.S., Japan has launched on the difficult path to indigenous human spaceflights.
By Dwayne A. Day

34
SPACE: A MORAL VACCUUM?
The Universe offers humanity endless possibilities and new frontiers, but can we maintain the ideas of civilization and civility so far from home?
By Jeff Krukin

38
FROM OUTER SPACE TO UNDERSEA
If the seas weren’t perilous enough, this fall, Hollywood filled the Earth’s oceans with aliens and sea monsters. Will they bite? Probably, but will audiences?
By Bill Christensen

5
LETTER FROM
HEADQUARTERS
2022 is the year NASA plans to open the first lunar outpost.
By George Whitesides, NSS Executive Director

20
OPINION
Faith and Space Exploration Do Mix
The author argues that yes, while humanity needs sound engineering and good science for successful space missions, we also need faith, an important part of what it means to be human.
By Dr. Arthur Smith

47
COMMUNITY
A Different Perspective: International Cooperation in Context
By Gary Barnhard, Chairman of the Executive Committee

52
SIGNING OFF
At 10, the Solar and Heliospheric Observatory (SOHO) is Still Hot
By Robert Roy Britt