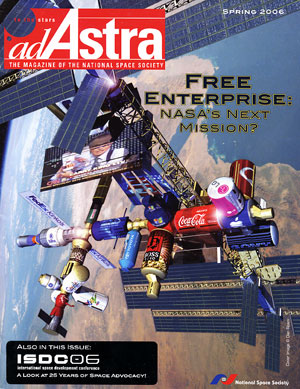 Featured Articles:
16
THE INTERNATIONAL SPACE DEVELOPMENT CONFERENCE:
A QUARTER-CENTURY OF SPACE ADVOCACY
25 years ago, a generation influenced by Apollo staked a claim for space travel for all humanity.
By Leonard David

19
SHARING THE STORY:
THE ALLEN TELESCOPE ARRAY
In a remote valley in Northern California, the search for the answer to one of humanity’s greatest questions has begun.
By David Schlom

26
NASA: RISING TO THE CHALLENGE? OR STUCK IN THE PAST?
The Vision for Space Exploration needs innovative ideas not just from within the U.S. space agency, but across the whole aerospace industry.
By Robert S. Walker

28
COMMERCIAL SPACE:
IS NASA ALL TALK AND NO ACTION?
Since the agency’s current approach to “big aerospace” offers little wiggle room to work with entrepreneurs, systemic change is needed.
By Richard Searfoss, former Space Shuttle Commander

30
NASA, LET US HELP YOU HELP YOURSELF
The founder of the Ansari X Prize, the X Prize Cup and Zero-G Corporation offers NASA a little unsolicited advice.
By Peter H. Diamandis

32
OPENING THE INTERNATIONAL SPACE STATION FOR BUSINESS
If the orbiting platform is to survive long after NASA stops participating, a business model or a Chamber of Commerce is needed.
By James Muncy

34
THINKING DIFFERENTLY WITH SPACE ELEVATORS
By depending too much on rocketry and brute force, humanity might be missing its chance to glide into space on gossamer threads.
By Dave Brody

38
TAKING THE MOON BY STORM
With the world’s space-faring nations all eyeing the Moon for future exploration, a look at the science fiction of the past could influence the future.
By Bill Christensen

20
OPINION
Isolation or Cooperation?
The United States remains the world’s leading space power, but without international cooperation and technological innovation, that lead could be lost.
By Lon Rains

42
REVIEWS
Skywalking
Reviewed by John F. Kross
Return to the Moon: Exploration, Enterprise, and Energy in the Human Settlement of Space
Reviewed by Robert Z. Pearlman

43
COMMUNITY
Fomenting Change: The Art of Forcing a Paradigm Shift
By Gary Barnhard, Chairman of the Executive Committee

48
SIGNING OFF
Salute to Salyut 1
By James Oberg