Colonies in Space, by T. A. Heppenheimer 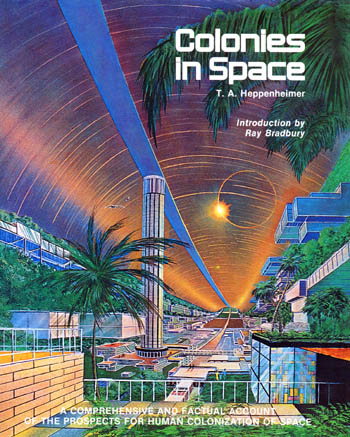 The National Space Society is proud to present this online edition of the complete text of the 1977 hardcover edition of the landmark book, Colonies in Space. The key ideas are presented in Chapter 2, with the rest of the book an elaboration on those ideas. We were not able to obtain permissions for many of the illustrations, but were able to include the nice color plates in the center of the book. See also our review of this book and our page about the author.

COMMENTS ON THIS BOOK: ISAAC ASIMOV: “How warm and delightful to read about an expanding future for humanity! Mr. Heppenheimer takes us into the infinite world of the coming space age and tells us everything there is to know about it, as of this moment.”

RAY BRADBURY: “Colonies in space? Yes, of course. Why not? Let’s go there. Let’s do the job. But scores of doubting Thomases repeat the question. Mr. Heppenheimer answers it on many levels in this book….Mr. Heppenheimer is keeper of the key, opener of the gate, tender of the gardens we will toss to space and inhabit with proper proportions of sorrow and joy. He offers you citizenship in the Universe. How can you refuse?”

Chapter 1 – Other Life in Space

Chapter 2 – Our Life in Space

Chapter 4 – Hope for the Future

Chapter 5 – First of the Great Ships

Chapter 11 – What’s to Do on Saturday Night?

Chapter 12 – The Shell of the Torus

Chapter 14 – The Next Million Years

Chapter 15 – Ring Around the Sun

My thanks to the people who have contributed to this book, or who have furnished unpublished material for my use. Among the latter are Mark Hopkins, J. Peter Vajk, Gerard O’Neill, Gerald Driggers, Carolyn and Keith Henson, Pat Hill, Eric Hannah, Gene Shoemaker, Eleanor “Glo” Helin, and Brian O’Leary. Particular thanks go to Don Dixon and Pat Hill, for artistic and architectural services of the highest quality; to Richard Johnson of the NASA Ames Research Center, where so much of the material of this book was developed; and to my agent, Richard Mesce.

Finally, special thanks go to Wilbur Nelson, Peter Goldreich, and Gerard O’Neill, without whom I might never have gotten involved in space colonization in the first place.