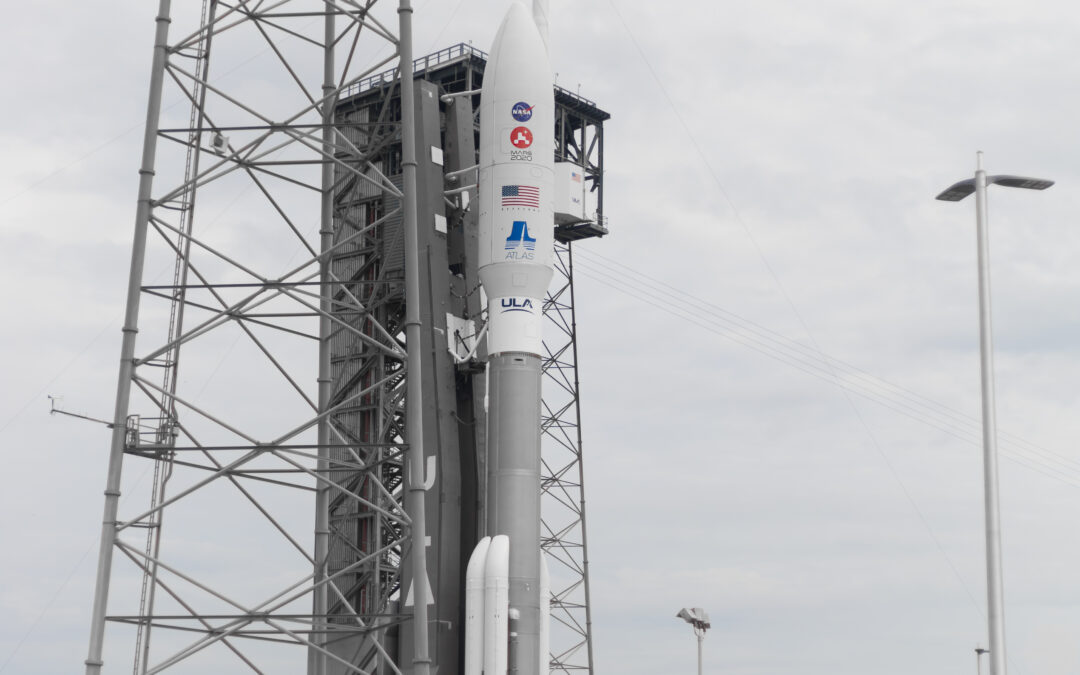 This Space Available by Emily Carney

The National Space Society applauds United Launch Alliance (ULA) and NASA for the successful launch of the Mars 2020 Perseverance mission, feted as the agency’s most sophisticated geological and astrobiological Mars mission yet, according to Al Anzaldua, NSS Executive Vice President and Chair of the NSS Policy Committee.

At 7:50 a.m. EDT, a ULA Atlas V-541 variant leaped off the pad into a sunny Florida sky at Cape Canaveral Air Force Station’s Launch Complex 41, marking the beginning of a nearly seven-month-long journey for rover Perseverance and the Ingenuity Mars Helicopter.

The launch vehicle’s high energy Centaur upper stage initially placed the payload in a parking orbit around the Earth. While NASA reported that Mars 2020 went into a “safe mode” shortly after launch, it is believed that this was “likely because a part of the spacecraft was a little colder than expected while Mars 2020 was in Earth’s shadow,” and not threatening to the overall mission. Ground controllers are working on restoring the spacecraft to nominal operations for its long Mars journey.

Veteran aerospace engineer Tom Hill discussed the Atlas V’s trajectory – which is markedly unlike, say, a crewed ISS launch’s – and why it appears so different: “Anything leaving Earth has a hyperbolic trajectory. As it leaves Earth’s circle of influence, it orbits the sun until it arrives at its destination planet.” He also explained how Mars 2020 will make its approach to its destination, planned for Thursday, February 18, 2021: “The approach orbit is also hyperbolic, though in reverse. Perseverance will dive directly into Mars’ atmosphere and use it to slow down. Craft that orbit usually use their engines to slow down.”

The target for Mars 2020 is Jezero Crater, which is described by NASA as being “geologically diverse.” The focus on astrobiology – the search to determine if any biological activity existed or still does exist on the Red Planet – and some of the technologies used by the spacecraft recall the heritage of a past pair of ambitious Mars missions, the Viking program of the 1970s. Rachel Tillman, founder and executive director of The Viking Mars Missions Education and Preservation Project, stated on Facebook, “The heritage from Viking runs deep in Perseverance, using elements of the Viking EDL (entry descent and landing) and RTGs for power, but expands and improves many systems too.”

While Perseverance’s focus is partly to search for unusual geological features and any potential of life that may exist outside of our home planet, both the rover and the Ingenuity helicopter are also meant to deepen the understanding of how to travel and work on Mars, both essential to know for possible future crewed missions and/or settlement. Ingenuity will make five powered flights over a period of 31 Earth days (30 sols); these flight tests will teach engineers about transiting through the Martian atmosphere, and are vital in learning how to synthesize future missions.

In addition, it bears mentioning that Mars 2020 is also an international effort. The European Space Agency (ESA) announced that five European researchers from Belgium, France, Sweden, and the United Kingdom will help guide Perseverance as it hunts for life; the ESA Mars Sample Return mission – as yet un-launched – will retrieve carefully selected samples for these researchers at a later time.

Despite the many challenges faced by humanity this year, 2020 is turning out to have a “Summer of Mars.” In previous weeks, China launched Tianwen-1 and the United Arab Emirates launched its Hope Probe, both headed to the Red Planet. The ExoMars mission’s lander and rover, a joint ESA and Roscosmos project, has been postponed likely until 2022.