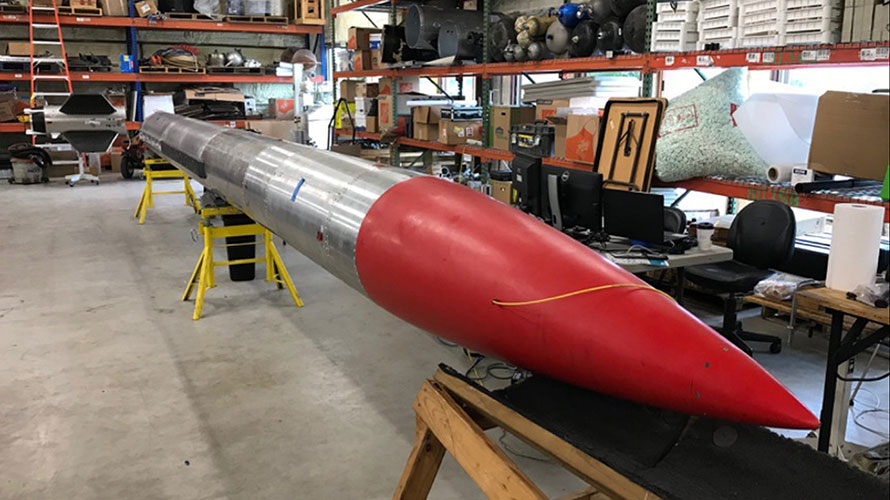 Researching science in space has long been a costly endeavor. A rocket launching from New Mexico’s Spaceport America this Saturday may help change that when an EXOS Aerospace SARGE test flight heads into space carrying student and other research experiments.

Tune in to the launch live stream here at the EXOS YouTube channel. It will go active when the live stream begins:

“Reusable rocket technology makes it possible to cut the launch waiting period for a payload dramatically, while also reducing costs,” said EXOS Co-Founder and Chief Operating Officer John Quinn. “This lowers the barriers for the types of NewSpace education experiments made possible by Enterprise In Space (EIS).”

The EIS student experiments were created at the Grand Center Arts Academy (GCAA) in Saint Louis, Missouri. EIS worked with Andrew Goodin of GCAA and 24 students from his “Building Creative Confidence” class on experiments related to topics such as using the heat of space to melt crayons into space art and determining the effects of the space environment on maple tree seeds that will be grown on Earth when returned from space. To house the experiments, Goodin’s class produced a 3D-printed container that met the criteria of EXOS. In less than two months, they made a 3D-printed cube housing and drop tested it to ensure the object would survive the rocket trip.

Enterprise In Space, a nonprofit program of the National Space Society, has led the effort as part of its focus on STEAM (Science Technology Engineering Arts and Math) education and space exploration advocacy. EXOS is hosting the Enterprise In Space and CAST payloads as an in-kind contribution.

“This is the first of many anticipated suborbital research space flights,” said Shawn Case, EIS founder and chairman of the EIS board. “Our goal is to inspire the next generation of future astronauts and space explorers by doing valuable scientific experiments in space. The experiments going up with the SARGE rocket look at some really cutting-edge science, and we’re thrilled to be able to launch the educational payload for Goodin’s class.”

EIS plans to work with EXOS to create an educational K-12 curriculum for the EIS Academy (www.eisacademy.org), as the two partners further develop a long-term relationship.

About Enterprise In Space:
Enterprise In Space (EIS) is the world’s first NewSpace education program. EIS provides access to STEAM education to all through the open online EIS Academy. The program’s first Academy-wide project is the design, launch, and retrieval of a 3D-printed spacecraft carrying 100+ active and passive experiments from K-postgrad student teams from all around the world.

About the National Space Society (NSS):
NSS is an independent nonprofit educational membership organization dedicated to the creation of a spacefaring civilization. NSS is widely acknowledged as the preeminent citizen’s voice on space, with over 50 chapters in the United States and around the world. The Society publishes Ad Astra magazine, an award-winning periodical chronicling the most important developments in space.

About EXOS Aerospace Systems and Technologies:
EXOS is a leading developer of reusable space launch vehicles and is based in Greenville, Texas. EXOS provides affordable, repeatable, and reliable commercial spaceflight with accelerated turnaround.

About the Center for Applied Space Technology:
The Center for Applied Space Technology (CAST) is a 501(c)(3) corporation based in Florida with offices at the Cape Canaveral Spaceport and Jacksonville, FL. The Center has supported space medicine research in the laboratory and on parabolic, high altitude balloon and suborbital space flight, as well as on board the International Space Station. The EXOS flight will provide the CAST team with another significant opportunity to explore and characterize the behavior of biological systems when in the environment of microgravity.

About Made In Space:
Made In Space, Inc. is the world’s most experienced in-space manufacturing company. Established in 2010 and with offices in Florida, California, Alabama and Ohio, Made In Space leverages the unique properties of the space environment to develop manufacturing solutions to commercial, industrial, research and defense challenges.