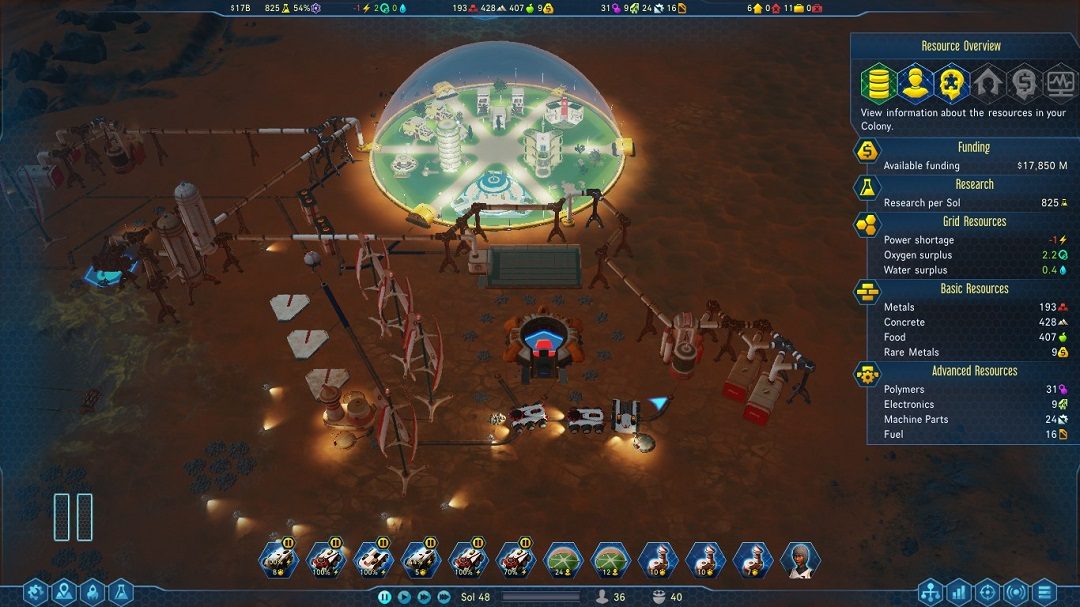 Have you ever wished to build a Martian settlement from scratch and attempt to make it self-sufficient? That’s what the game “Surviving Mars” provides. You begin by selecting which materials to send initially and where to land the supply ship after using probes to investigate potential spots. Once the ship lands, you instruct your automated drones and rovers to begin construction, and there is much to do. You must set up water extraction, a power grid (with a Stirling generator, solar panels and wind turbines), a MOXIE oxygen generator, a concrete plant, and a habitation dome in anticipation of the later initial group of 12 astronauts (called the Founders). When you’re ready, you can even select from a number of traits for your initial team, for example, such as whether they are workaholics or loners, all of one sex or a mixed team, and their specialties (scientist, geologist, engineer, etc.).

You mustn’t forget to create a fuel generator for rocket fuel from the water and oxygen you’ve extracted so that your ship can go back for more supplies, as advanced polymers and electronic equipment won’t be able to be manufactured on Mars until you have a more advanced settlement. And your Founders need to survive at least 10 sols to prove the initial setup is viable before you can send additional people, so build a greenhouse to feed them. And you’ll need to decide at what point you’ll allow your settlers to have children, since there’s no room for schools and support facilities at first.

The game reminds me of a much more complicated version of the very old Sierra Online “Outpost” game, but it does provide a set of tutorials on managing initial construction through resource extraction and multi-dome expansion. But even after having played the game through 48 sols (see the image at the top, a closeup of one area taken during the night cycle), it took me multiple tries to get my genius scientist Founder to leave the night shift at the infirmary and instead work in the research lab. And placing pipes to fully connect water and air supplies was a bit difficult to manage.

The game has some silly aspects, such as the ability to select/deselect the traits of “lazy” or “hypochondriac” and it seemed a waste to have a grocery staffed by a grocer when there were only 12 colonists. However, I did have fun and learned that I really needed to focus on overall placement planning so as not to have a confusing web of pipes and power cables. I’m hoping once I have shuttle capability researched that I can place a dome in a far-off location, and that second settlement will be much better organized. If done well, I’ll get the option to provide for tourist visits from Earth.

PC Gamer gives it an 80/100 and I would concur with that, losing points mostly for some of the sillier options and the initial difficulty in creating connections.

“Surviving Mars” is on sale at Steam ($27.99 vs. $39.99) through 6/15/2018, and is also available from Amazon for the PC (deluxe edition) and other platforms like Xbox and PS4. Please use our NSS links to purchase if possible. It helps NSS and does not cost you anything more.