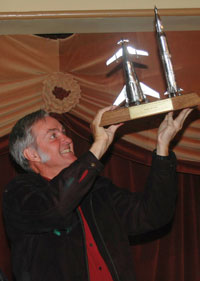 “Burt Rutan’s historic achievement picks up where Wernher von Braun and our team left off,” said Dannenberg, one of the leading propulsion experts on the Mercury, Gemini and Apollo programs. “But instead of a space race with the Soviets, space tourism and entrepreneurs are driving this new space program. By giving people hope again for a long-term future in space, Burt Rutan is the natural choice for this award.”

The Space Pioneer Awards for 2005 went to:

The 2005 Chris Pancratz Space Activist of the Year Award was presented to Ronnie Lajoie.

The 2005 NSS Excellence Awards for distinguished service to the Society were presented to: