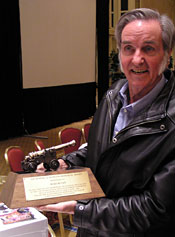 The 2008 Robert A. Heinlein Memorial Award for lifetime achievement was presented to Burt Rutan (photo at left) for his work to create a free spacefaring civilization. As President of Scaled Composites, his continuing innovative accomplishments in sub-orbital launch technology with SpaceShipOne and SpaceShipTwo have provided a great example of space entrepreneurship, may soon provide the spaceflight experience to the public, and has boosted commercial interest in fly-back first stages based on advanced aircraft, one of several promising paths to solving the urgent problem of high launch costs.

The 2008 Gerard K. O’Neill Award for Space Settlement Advocacy was presented to Dr. John H. Marburger, III, science advisor to the President and director of the Office of Science and Technology Policy. While he is not an explicit settlement advocate, his public addresses of the last several years focusing on the economics of space development have done more to forward the cause of space settlement than many space settlement advocates. His message, that there are hard economic realities facing the creation of sustainable space transport and commerce, needs to be made a central issue in designing the current space program. It has helped to demonstrate how to integrate the long-term goal of space settlement into current plans for exploring the solar system, and if implemented, could lead to a sustainable human presence in space. See Dr. Marburger’s pathfinding keynote speeches for the Goddard Memorial Symposium in 2006 and 2008.

The Space Pioneer Awards for 2008 went to: 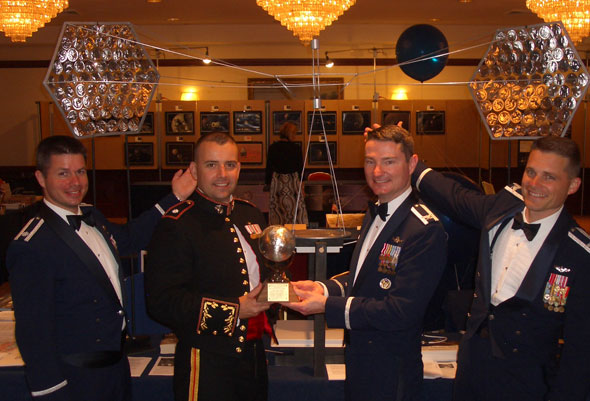 A special Lifetime Achievement Award was presented to Hugh Downs, Chairman of the NSS Board of Governors, for his lifetime contributions to communicating the importance of space exploration. 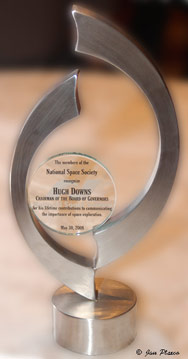 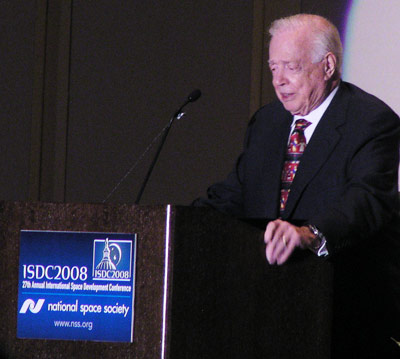 Some of the winners of the 2008 NSS-NASA Space Settlement Student Design Contest were present at the ISDC to receive award certificates. The Grand Prize winners were from Constanta, Romania. Shown below are some of the team members who shared First Prize in the large group category, from Dayanand Anglo-Vedic High School, Airoli,
Maharashtra, India. Their winning design was called “Utopia”.

The 2008 Chris Pancratz Space Activist of the Year Award was presented to Rick Zucker. Rick has spent 25 years in private practice as an attorney and was a former Massachussetts Special Assistant Attorney General, as well as founder and president of the Eastern Massachussetts Chapter of NSS. Rick led the effort to negotiate the new Ad Astra contract, chaired both of NSS’ 2008 mass membership visits to Congress, and heads the NSS bequest program.

The 2008 NSS Excellence Awards for distinguished service to the Society were presented to: