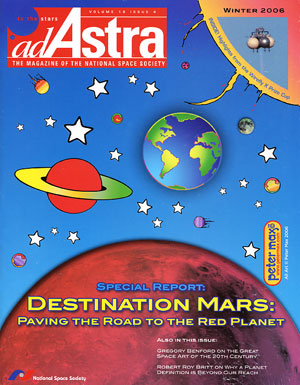 16
WHY PLANETS WILL NEVER BE DEFINED
The Great Pluto War in Prague failed to forge an accepted definition, but it succeeded in alienating astronomers and deepening rifts along theoretical and national lines.
By Robert Roy Britt

19
GREETINGS FROM LAS CRUCES, NEW MEXICO
The Wirefly X Prize Cup captured the imaginations of old and young this year, taking the idea of a county fair to new heights.
By Bart Leahy

25
DESTINATION MARS:
PAVING THE ROAD TO THE RED PLANET
Introduction by Leonard David

26
STEPPING-STONES TO MARS:
AN ALTERNATIVE STRATEGY
While NASA moves ahead with its Mars plans, a private investigation into an alternate route calls into question the wisdom of the Vision.
By James Oberg

30
NASA’S VISION: AN OUTDATED BUSINESS MODEL?
The U.S. space agency is headed back to the Moon and on to Mars, but will mimicking how they built the Apollo program work in today’s political and economic climate?
By Joan C. Horvath

33
MARS DIRECT: WOULD IT WORK?
Whether you consider Robert Zubrin a maverick gadfly or an oracle, his ambitious plans for colonizing the Red Planet have engaged the public and private space sector for years. But a lot has changed since the plan’s inception.
By Robert Coppinger

36
BONESTELL AND BEYOND
A half century ago, space visionaries used amazing images of distant moons, planets and spaceships to inspire a generation to take great risks. Does today’s society need similar inspiration?
By Gregory Benford

42
A COSMIC CONVERSATION WITH PETER MAX
By Bart Leahy

24
OPINION
Science Versus Exploration: A False Choice
By Michael Griffin

43
COMMUNITY
Mars Needs Women…so does the rest of the Space Movement.
By Gary Barnhard, Chairman of the Executive Committee

48
SIGNING OFF
Learning to Rove
A tiny pioneer paved the way for greater exploration of the Red Planet.
By Tariq Malik